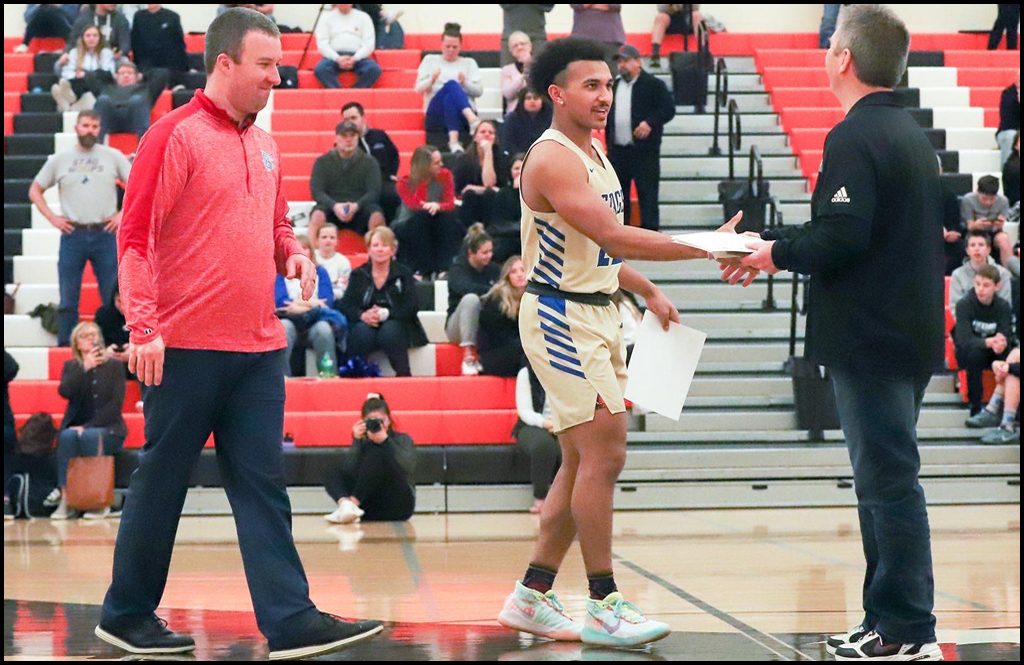 Dawson Youngblood is given All-League honors at the district tourney. (Courtesy photo)

BLUE BLOOD : Dawson Youngblood a key part of a powerful Deer Park squad that has advanced to the State 1A basketball tournament…

While he may be wearing a different colored jersey, Dawson Youngblood is be very familiar to those who have sat in Chewelah’s basketball gym the past few years.
Youngblood, who transferred from Chewelah to Deer Park after his freshman year of high school, was a standout Cougar and is now a key part of the Stags run to the District 7 1 championship for two years in a row.

“The season has gone overall really well,” Dawson told the Independent. “We’ve gone through some hard times that have built us and prepared us for post season for sure.”

The Stags had their toughest test in their last game, staring down the barrel of the top-seeded Freeman Scotties and their 16-5 record. At West Vally High School last Wednesday, Youngblood notched 24 points while his teammate and league MVP Jobi Gelder scored 19 points in the district championship game for a 71-62 victory. The Stags were trailing 38-37 after three quarters but exploded for 34 points in the fourth quarter for the victory. The Stags boosted their record to 16-6 on the year and punched their ticket to the regional round of the state basketball tournament.

“It feels great getting back in the state tournament,” Youngblood said. “I love it.”

Today, they will face 14-10 King’s from Seattle. While the Knights were undefeated in league, they have just a 14-seed compared to Deer Park’s 11-seed. A caveat, however, is that King’s beat Deer Park 77-40 last year in the state tournament, meaning the Stags will probably want a little revenge.

“Our first round matchup is looking good,” Youngblood said. “It’ll be a great and fun game. I can’t wait.” 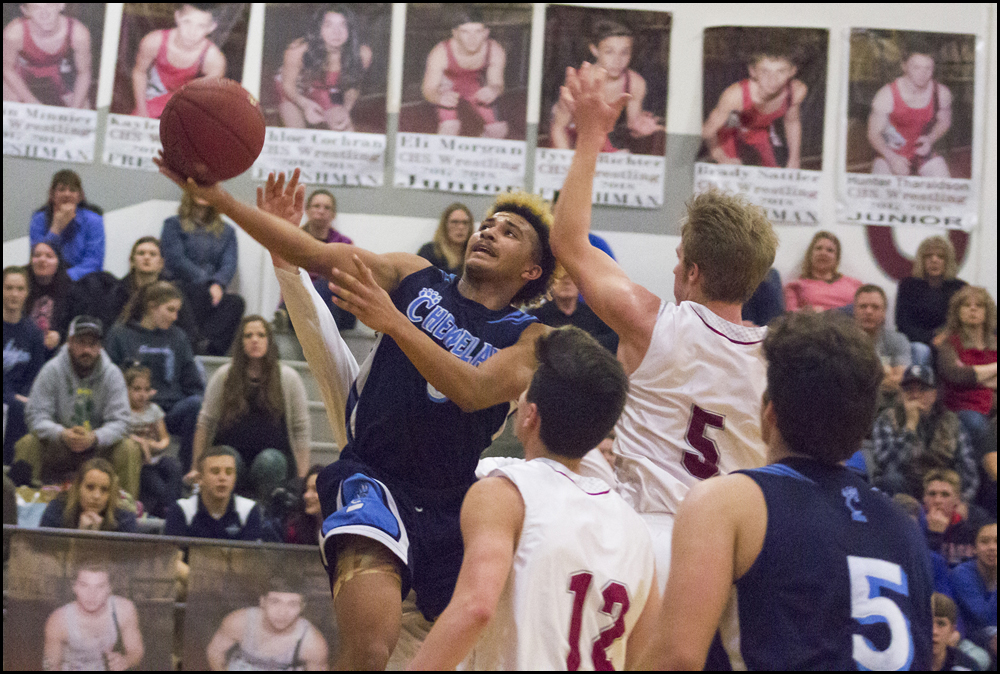 Even as a freshman, Dawson Youngblood was a force for the Chewelah Cougars and is seen here driving to the hoop against Colville two years ago. (Brandon Hansen photo)

If they win, the Stags will move on in the bracket to the Yakima Sundome on March 4-7.

Youngblood said that what has been some keys to success at Deer Park has been his effort all the time during games, on both sides of the ball.

“I love playing defense and being able to stretch the floor with my three ball as well as my ability to drive and score,” Youngblood said.

The junior has been able to be a leader and facilitate to find teammates like Gelder.

Before Youngblood showed up to Deer Park, the Stags were 9-12 overall. In his first year playing as a sophomore, the team improved to 20-4 overall and 11-2 in league play.

Regardless of the result this year, Youngblood has one more year with the Stags in 2020-21 and the potential is there for another great season.

“I’m feeling great about my senior year,” Youngblood said looking forward, kind of. “I’m still in my junior year though and I’m taking it one day at a time and trying to get better each day. After my high school career, I want to major in exercise science and minor in business.”

Youngblood and the Stags tipoff tonight at West Valley High School in Spokane at 6 p.m.