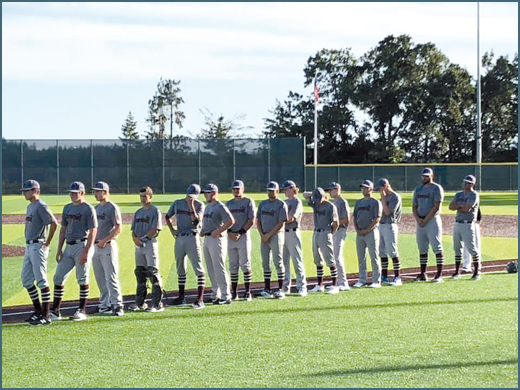 The Spokane Northstars picked up one win at the State AAA Legion State Tourney in Bellingham over the weekend. (Angie Sweat photo)

The Spokane Northstars did not come home from the state American Legion AAA Tournament empty-handed. They returned with a 2-1 win over the Wenatchee Valley Apple Packers that will linger longer than their two losses to Bellingham and Port Angeles. Although their season came to an abrupt ending with Monday’s second loss in the double-elimination state finale, the Northstars won 25 games over the summer and molded a baseball brotherhood that will endure for many more seasons.

With the score tied at one run apiece in the top of the sixth inning with two outs, Stars third baseman Justin Jones hit a ground ball to the Packer shortstop and had to dive into first base to avoid the tag on an errant throw that took the first baseman off the bag. Andrew Sweat then hammered a double into the left field gap that plated Jones to score the winning run.

“JJ scored all the way from first base and slid into home plate ahead of the tag,” said Coach Eric Krausz.

On the mound, Northstar right-hander Justin Rollis threw all seven innings of a pitcher’s duel, allowing only four hits and one run for the complete game win. He held the Packers scoreless through the last six innings after giving up a run in the bottom of their opening at-bat.

“Justin’s performance on the bump kept us in the game,” said Krausz. “He threw an absolute gem of a game.”

The Northstars brought in the tying run in the second inning when Sweat’s ground ball scored Elan Krausz from third base. Krausz had been given a leadoff walk and was advanced to third base by a line drive single up the middle by Jones. The run knotted the score at 1-1, and that is the way it remained until the decisive sixth inning.

Jones had two of the Northstars’ three hits with his pair of timely singles. Sweat’s game-winning double was the only other hit.

Bellingham 7, Northstars 1
Five hits produced only one run on Saturday when the Northstars lost a 7-1 game to tournament host Bellingham. Zak Kubik’s single in the third inning brought Carl Oman home with their lone run of the game. Lukas Kubik, Broc Houser, Justin Jones and Tayeb Wilson also had hits.

Port Angeles 15, Northstars 5
The Northstars scored five runs in their first trip to the plate on Monday, but that was where their scoring ended. They maintained the lead until the fourth inning and were ahead 5-3 when Port Angeles went on a 12-0 run spree over the last three innings.

Two singles by Carl Oman and two hits from Tayeb Wilson and Lucas Miracle fueled the first inning rally for the Northstars. Oman scored on Wilson’s one-bagger through the left side. Zak Kubik was hit by a pitch and was batted in by Elan Krausz. Walks given to Justin Jones and Andrew Sweat gave the Stars a pair of baserunners for Miracle, whose line drive double into the left field gap scored Jones for a 4-1 lead. Sweat’s second single of the inning scored Sweat and the lead grew to 5-1.

Port Angeles kept chipping away at the Northstar lead through the next two innings, narrowing the score to 5-3. Then, the floodgates opened and Port Angeles put 12 unanswered runs on the scoreboard. Meanwhile, the Northstars were limited to three hits, on apiece by Kubik, Sweat, and Wilson.