SOFTBALL: Making a transformation in Colville 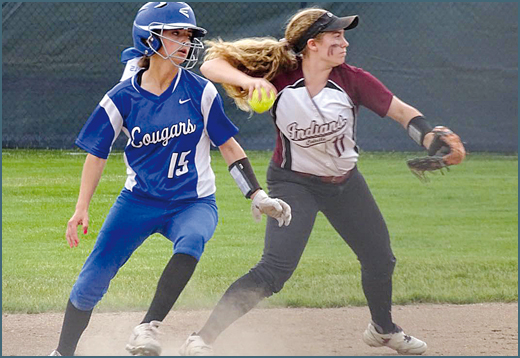 OVERCOMING A LOT: Adversity couldn’t slow down Indians during 2019 season…

It was a transformative year for the Colville softball team and Coach Mandy Sumner. Both Sumner and her squad battled through mountains of adversity – including the loss of Sumner’s father – to make it to the State 1A Tournament in Richland two weekends ago.

The Colville Indians battled injury during the year, a death in the family and a whole lot of position shuffling as the players got used to Sumner taking over the reins of the softball program once against after a family hiatus for a few years.

“For me, this season was life-changing from when it started on Feb. 28, to the very last day of the tournament,” Sumner said. “I think I’m a different person, and I think our girls are fundamentally different with all the maturing they did throughout the year.”

The Indians finished third in the NEA League, and one would expect a low seed in the tournament to perhaps struggle. But Colville battled both their opponents essentially down to the wire. While both were losses, the team tangled with Seattle Christian 10-8 and Warden, 8-4.

Adversity followed the team to Richland as Colville pitcher Hallie Cox hurt her neck during warmups and went on to pitch both games with a thrown out neck. With Sumner’s husband an athletic trainer and with her parents approval, they continued to monitor Cox’s pitching and she powered through the pain and soreness.

Sumner said in both games it was just an inning or two where focus was slightly lost and runs were allowed, otherwise the Indians fought in every game.

“If you don’t play with an amount of looseness in softball, it’s going to be tough,” Sumner said.

Other than an inning or two defensively to clean up, Colville did score 12 runs in two games against state pitching which isn’t something to ignore. Warden, who beat Colville 8-4, would go on to place fourth in the tournament.

“Our bats were hot during the tournament,” Sumner said. “Hallie was hitting, Molly Goodwin had the tournament of her life, diving, tagging and catching the ball everywhere. Our other girls were hitting the balls around. We just didn’t quite have enough innings that we were allowed to pick up the win.”

Makayla Weimer finished up her career as Colville’s catcher and ended up calling all the pitches for the tournament. It was also the final tournament for Mia Sandaine and Cox.

“We graduate three seniors who played big roles on this team but return six starters and two that rotate starting positions,” Sumner said.

Jade Braun is expected to be the pitcher next season with Rebecca Koeppen being the backup hurler. Freshman Brook Seitters could also make a big impact next year as well as shortstop Andi Brown.

Over the summer Colville has 10U, 12U, 14U, 16U and sometimes 18U teams that keep players active, although some disperse on Spokane teams because they travel more.

“Now every girl coming back next year will have state experience,” Sumner said.