SNOW PLOWS: Whose idea was that? 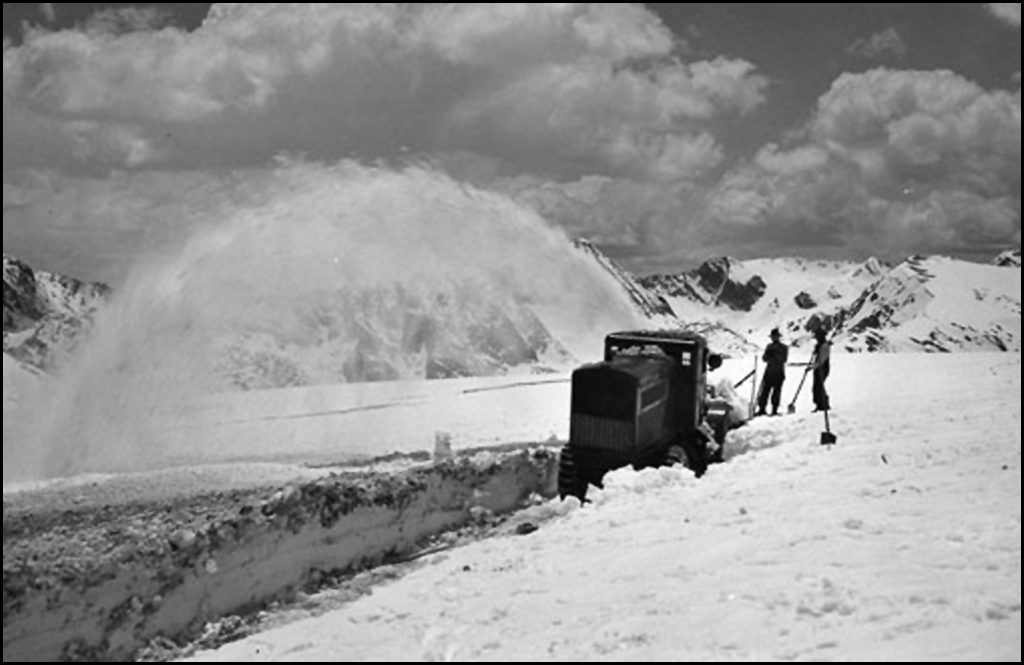 The first patent for a snowplow was issued in the 1840s…

I was driving down Flowery Trail in Chewelah behind a county snowplow and realized that he was sanding at the same time. What a good idea, I thought, and then wondered who, exactly, invented the combination. I remember days back in Boston when the snowplow would come through first, and the sanding truck second. No more – you get both at the same time now. So. whose idea was that?

I figured that maybe the first plow was invented in Scandinavia, the land of snow, but I had no luck researching that. Then I realized – they don’t need no stinkin’ plows there. In Norway, they just ride reindeer, right? And in Sweden, they all drive Saabs (I’m a Saab girl from waaaay back. Don’t judge me).

Supposedly, the first patent for a snowplow was issued in the 1840s. The website Citilab.com states that “According to a wonderfully comprehensive history by the National Snow and Ice Data Center, the first snow plow was deployed in Milwaukee in 1862.” Those plows were actually dragged behind a team of horses, and caused quite the mess at intersections, driveways, and storefronts.

No one seems to want take credit for the snowplows you see on the front of trucks today, however, Wikipedia states that in 1913, Good Roads Machinery of Pennsylvania built the first plow intended for use on motor equipment.

“Good Roads is therefore unofficially credited as the originator of the modern snowplow, though their horse drawn steel blade road graders were used to clear roads of snow as early as the company’s founding in 1878 under their original name American Road Machinery.”

I’m pretty handy with that internet contraption, and I still didn’t have any luck digging up more on the origin of the snowplow/sander combo. But I did find some pretty interesting history on snow removal.

It probably won’t come as a big surprise that the first snowblowers were invented by Canadians. According to Snowblower.com, “The first documented ‘snow’ machine was patented in 1869 by J.W. Elliot from Toronto, but it was never produced.” I’m not sure why a dentist (Elliot) felt the need to design a machine to remove snow from railroad tracks, but more power to him! Next up was in 1884 when Orange Jull, also of Ontario, Canada, designed a machine to clear train tracks. His invention didn’t fare much better, with only 11 produced.

The modern day snowblower is pretty much attributed to another Canadian, Arthur Sicard. He was driven to help farmers clear snow from their grazing fields, because, you know – beef. “Surprisingly, it took him 31 years to get the design right. In 1925 he unveiled his machine in Montreal, and started taking orders on his aptly-named ‘Sicard Snow Remover Snowblower’,” Snowblower.com reports.

What next? Well, the human-powered personal-type snowblower, of course! Toro built that in 1952. Yes, yes, believe it or not – Toro is a Canadian company. That beautiful, red lawnmower of yours, well, yeah. Just saying.

So what did they do before all these snow-removing advances? I was surprised to discover that they actually used a horse-driven roller to compact the snow on streets. “To improve travel, horse carts and coaches were installed with ski-like runners in wintertime, which were better able to handle snowy conditions than wheels,” according to Jalopnik.com and other sites. That sounds kind of fun, doesn’t it? I wonder if I could get skis on my car.

Speaking of vehicles, and contests, in the U.K., they take their “grinders” (what we refer to as sanders) very seriously, to the point of naming them.

In Doncaster, England, they had a Twitter contest to find the best names for their two new grinders. The winners were “Gritsy Bitsy Teeny Weeny Yellow Anti-Slip Machiney” and “David Plowie.” Scotland also enjoys its winter humor, naming their machines things like “Sir Grits-a-Lot,” “Ready Spready Go,” and “Luke Snowalker” according to the site AtlasObscura.com.

Well, I never did figure out whose smart idea it was to combine snowplows with sanders. But it was a fun expedition into the world of snow removal – definitely more fun than all the shoveling I’ve been doing! It sounds like we have a lot to thank Canada for. Next time you bust out that machine to clear your driveway, you might want to turn North and wave politely, eh?