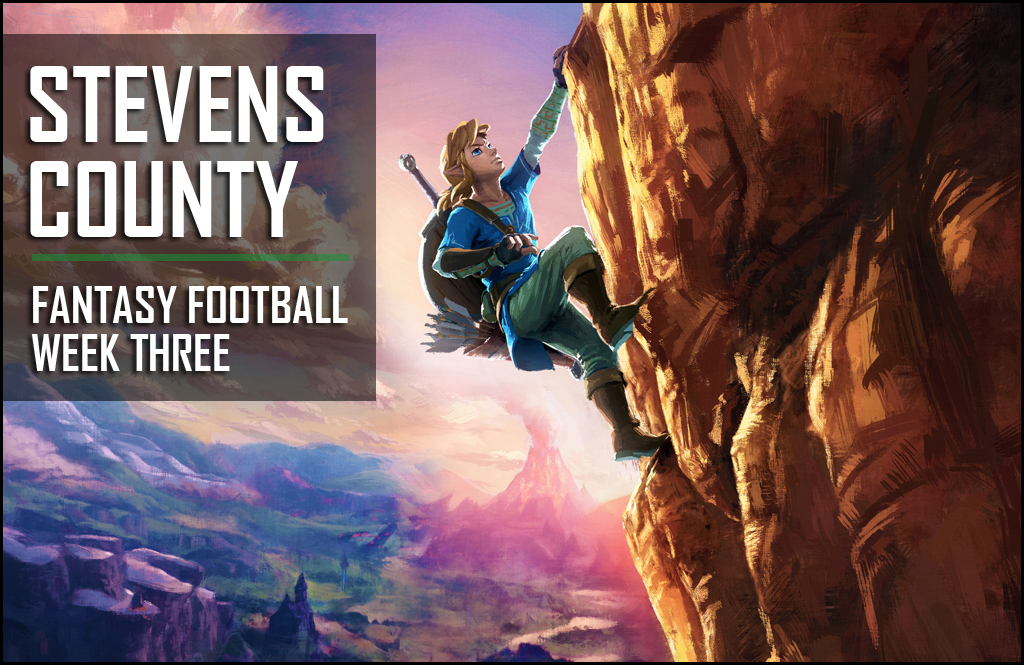 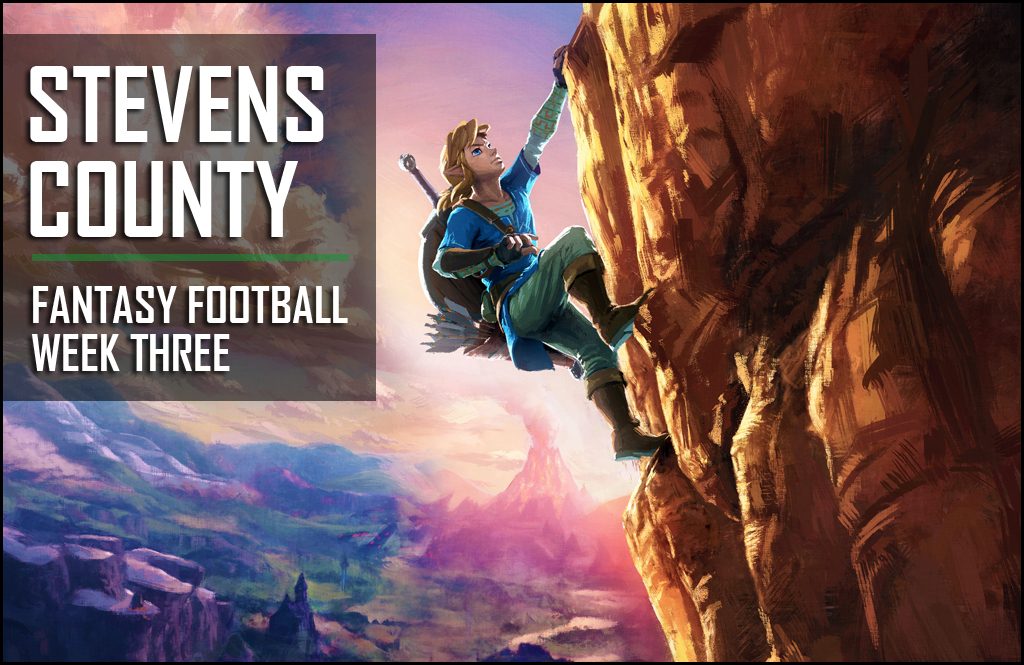 For the first two weeks, Selkirk QB Jay Link came in second for the fantasy football championship in Stevens County. Since we’re pretty ego-centric here at the Chewelah Independent, we automatically assume 1) somebody reads this fantasy article and 2) some weeks, coaches plan to get some of their players the fantasy football championship. We know this isn’t true because you don’t really win something except for a dollar store trophy, but maybe we’ll get a sponsor and get people like a Lunchable or something.

But enough about food. This Jay Link kid won the fantasy football championship for week three thanks to a balanced running and passing attack. It’s something he did last year as well since the Rangers high-powered offense uses him a lot in the process. Against Wellpinit in a 68-12 victory, Link passed for 173 passing yards and two touchdowns, while also rushing for 109 yards and two touchdowns while also scoring three two-point conversions for a whopping 42 points.

The 1B quarterback is the cousin of Chewelah QB Jake Jeanneret (who you will see further down the list) and even though Selkirk is located in Ione, which is Pend Oreille County, we give them a free pass and let them in the fantasy league. Why? Because they have some of the most ridiculous fantasy stats, we just had to let them in. The Rangers have had two games where common decency would ask for the team to layoff the gas and put some of the freshmen in the game, so I’m bracing for the fantasy-breaking performance they’ll log in when they face a team where they will have to leave their upperclassmen in for four quarters.

We’re not sure if Jay Link plays any video games, so he might be perplexed why we keep referencing a short little elfy looking guy with a sword. We’re not even sure if kids these days play Nintendo or Legend of Zelda games, but you see, the heroes’ name is Link, and therefore Jay Link. I’m sure if there was Fortnite character we could use, people would get it right away.

There is a big game in the future for the Rangers, as they will travel to Republic this Friday to take on the Tigers at 7 p.m. in a battle of the 1B powers. Both teams have turnout numbers in the 20s.

Colville may have won the football game 57-20 last Friday, but holy cow did Jake Jeanneret have himself a football game. Epic, I would say. Tim Tebow wishes he had the career that Jake Jeanneret has posted so far this year. The plucky QB from Quartzite passed for 340 yards on 20 of 31 passes along with a pair of touchdowns, he also rushed for 16 yards and one touchdown. This equals out, when you throw in a two point conversion for 29 fantasy points.

I’m buying all the Jeanneret stock I can, if he keeps putting in performances like this, the Cougar record book is going to get rewritten. I believe his dad Luke Jeanneret played QB as well, but since that was back before Chewelah discovered the forward pass when Jim Fisk came to town, I assume he was a running QB. Either way, this should be a fun conversation in the Jeanneret household about who was the better QB. If Jake wins a Fantasy Football title this year, he will have that to show against his dad, because when his dad played, the only fantasy football were the Seahawks making the Super Bowl.

Nick Franks, who is from Valley but people forget that, had six receptions for 147 yards and a reception touchdown for a NICE 20 fantasy points while fullback Kaden Krouse had 162 reception yards and one big touchdown reception for 22 fantasy points. If you’re keeping score at home, that is just three Cougar skill players who combined for a whopping 72 fantasy points. Both Colville and Chewelah finished with over 800 yards of combined offense in one game. I think I just heard Andy Reid’s ears perk up.

To put things in perspective, some Arena Football game don’t have this much offense, but the Cougars and Indians did this on a full football field, with both teams having legendary defenses last season.

SPEAKING OF COLVILLE, THE TOUGH, GRITTY TEAM OF STEVENS COUNTY…

While we have yet to confirm if Colville’s Grant Michaliszyn owns a Ford Ranger, but he can really run the football. He rushed for 188 yards on 16 carries while scoring threerushing touchdowns for 34 fantasy points (thanks to a two-point conversion), while Colville QB Sam Anderson passed for 146 passing yards, carried the ball for 77 yards and was involved in three touchdown passes and one rushing touchdown for a whopping 30 fantasy points. This offense is quick and hard-nosed as well. I think I saw Jory Dotts eat a person on the field. There may have been fireworks lit off in the endzone. You can never tell with these Stevens County games because everyone loves explosives around here and playing around with them.

By the way, there was an espresso stand at Snyder Field on Friday Night. HOW FROO FROO is Chewelah getting. I’m not sure we can call ourselves GRITTY Football players when we’re serving Vanilla lattes near the endzone. Next home game, the town is going to need to borrow a 40-cup coffee machine from the American Legion that has been serving veterans for decades and only sell plain, black coffee with grounds in it. This is the only way we can be gritty in Chewelah. (By the way, the mobile coffee stand is owned by Kelsey Fixel and a great stand!)

Anyways back to Colville, one of Sam Anderson’s favorite targets, Paul Skirko, notched 20 fantasy points with 87 reception yards and two reception TDs. Skirko is scary on the field and I had to look over my shoulder while walking to the concession stand because I had seen him run over so many people on the field, I figured he was going to do it to me on the way to the locker room because he saw me buy a latte during a football game. He’s like the Gronk of the NEA League. He’d better start making more Gronk-like tweets and say “Nice” a lot.

TOP FRESHMAN OF THE WEEK: AUSTIN PALADIN, QB OF SPRINGDALE FOOTBALL
So Austin Paladin had a whopping half-practice to get ready to QB after senior Wyatt Edwards went down in practice on Thursday before their matchup against Inchelium. How did the Valley kid (Yes lots of Valley Eagles in this Fantasy Football article) do? He threw for 69 passing yards, three passing TDs, while rushing for sixty more yards for a solid 26 fantasy points. This after half a practice. Imagine what this kid can do when he, you know, actually takes snaps for the team he will be quarterbacking for. 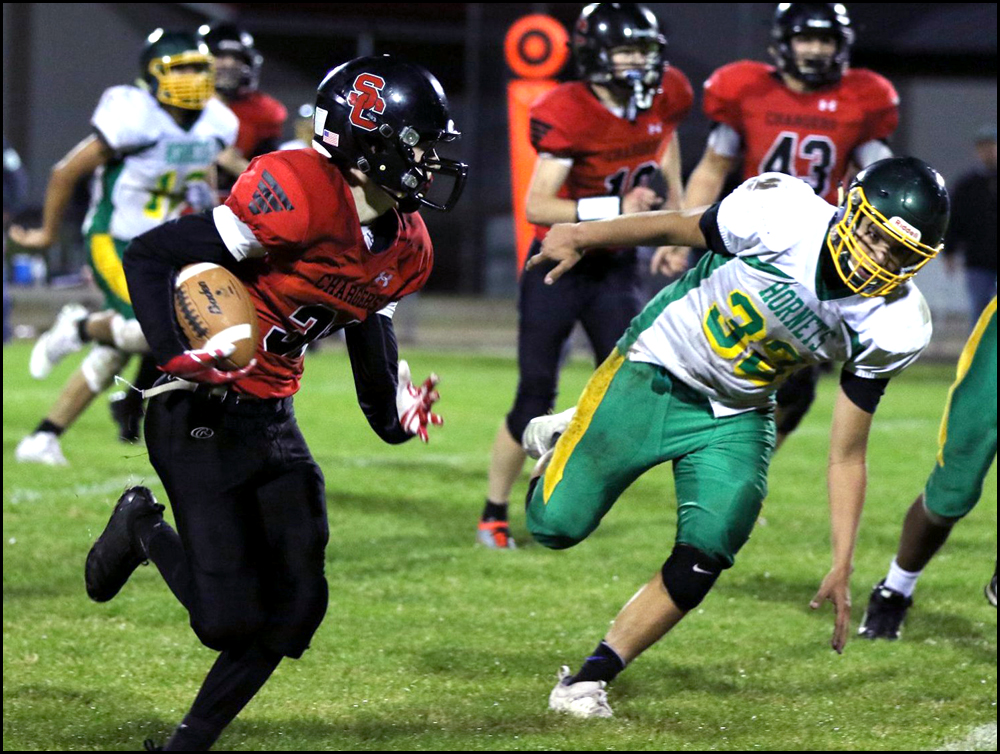 TOP RUSHER OF THE WEEK: SPRINGDALE’S ETHAN PENLAND
Well I guess Grant is the top rusher, but Ethan Penland from Springdale is our top fantasy RB as he had 149 rushing yards, three rushing TDs, while also notching 34 reception yards, and a reception TD. That is a whopping 41 fantasy points so he almost, ALMOST edged out Jay Link. Penland was like one of the few remaining seniors out on the field for the Chargers in their week three game, but expect Springdale to get some of their guys back for their Northport game this week.  Avery Matherly also had 15 fantasy points, catching two touchdown balls for 35 reception yards.

That is it for Week 3 fantasy football, we will keep an eye on how every does this Friday for Week 4.