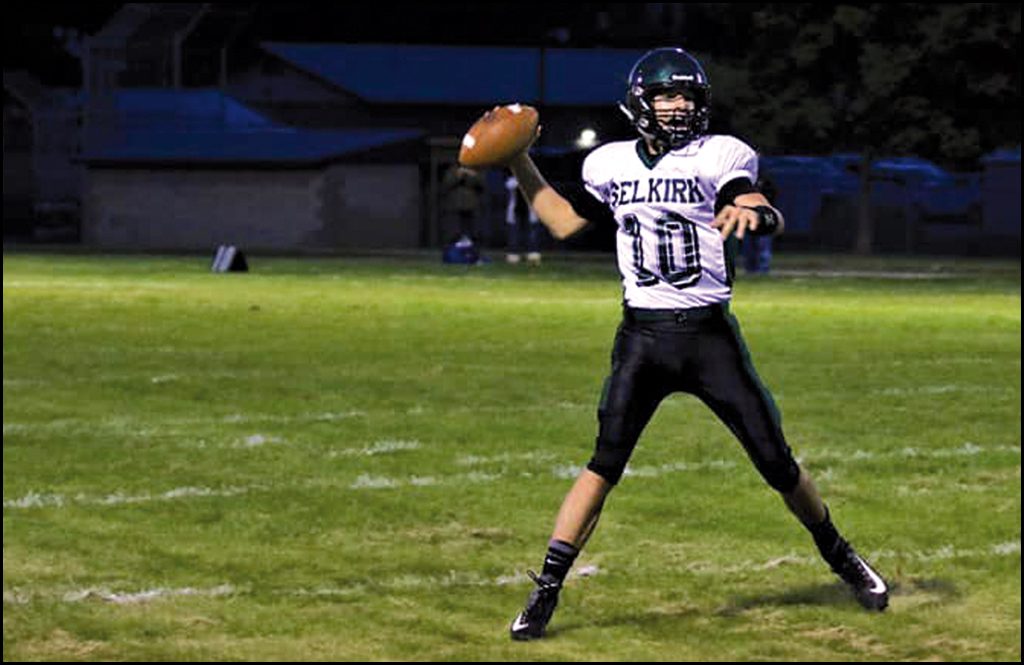 Selkirk QB Jay Link, originally from Chewelah, set two school records last Friday, passing for seven touchdowns in an 84-6 NE 1B North victory over Hunters. Link now holds the record for most career passes (80) and touchdown passes in a game (7).

It’s another game in this strong season by Selkirk, whose leading rusher was a backup sophomore and many young kids stepped in once the game was in hand to help with the victory. Selkirk improved to 4-1 on the year and looks again like a state power, ranked No. 9 by Scorebook Live.

“He really carried the ball in the second half for us,” Selkirk Coach Jeremy Link said. “Conner Bailey also came off the bench for us and had a big game. He scored a touchdown and two-point conversion and had two sacks for us.”

Link threw for 245 yards on just 11 completed passes, with seven touchdown passes and rushed for an additional 189 yards along with a touchdown run.

“Jay was good at finding the open man and not throwing it in traffic,” Link said. “If it wasn’t there, he would run it and that was really effective.”

Selkirk led 54-6 after the first quarter and would come away with the 84-6 NE 1B North victory. Lost in the stats usually is the defense which makes a lot of plays that lead to points.

“Our defense was smothering in that backfield all game,” Link said. “That led to a lot of stops and scoring opportunities.”

The Selkirk QB then threw a 21-yard touchdown pass to Luke Couch. Couch then scored Selkirk’s next touchdown, recovering a fumble and running it back 16 yards for a touchdown.
Hunter’s August Wagner returned an 85-yard touchdown for the Lion’s lone score.

“They have a lot of good athletes on that team and August is really impressive,” Link said.

Selkirk rounded out its first quarter scoring with another Link touchdown pass, a 32-yard strike to Curran.

Selkirk will move into a challenging part of their schedule as they will play at Springdale next week at 7 p.m.

“Our focus is definitely on Springdale this week, they gave Pomeroy a good game and that team is right up there in their league,” Link said.

‹ NORTHPORT FOOTBALL: Mustangs bull-rush their way to third win of season › WDFW says its alright to wear pink while hunting