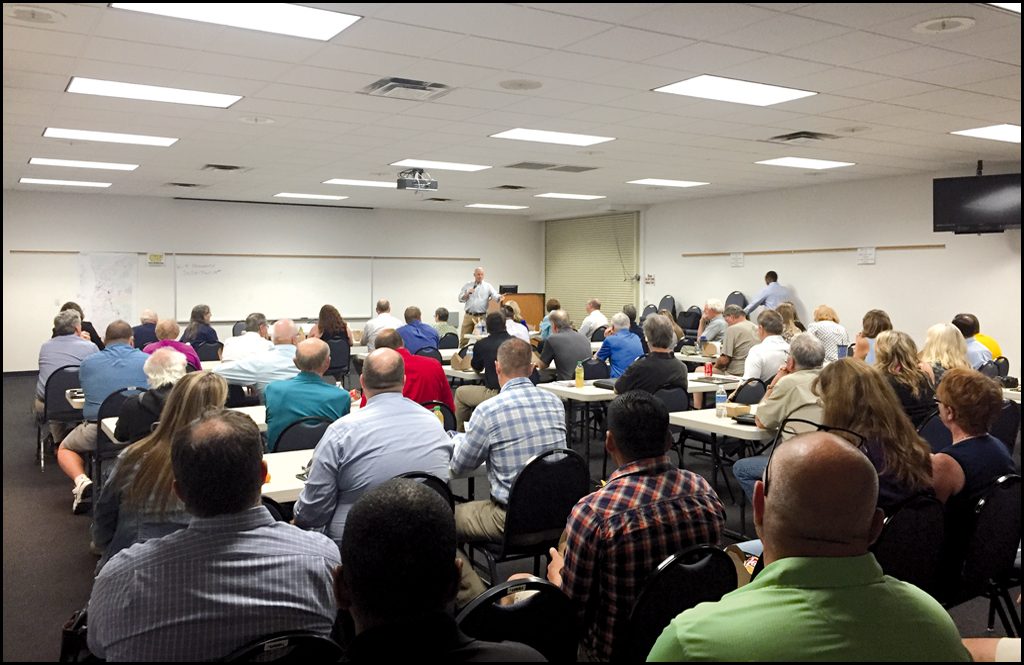 With leaders from both the state legislature, the county and U.S. Congress, the Stevens County Ambulance Training Center because something of a hub for the Improve Broadband in Rural Washington workshop in Colville on Thursday.

State Rep. Jacquelin Maycumber recounted the danger that can happen when NE Washington isn’t properly served by data services. When the Stickpin Fire was burning near Boulder Creek, Maycumber, an assistant for Senator Bob Morton met with incident command to take stock of the situation.

“The commander said he didn’t know what was going on; there was no radio, there was no reception up there, they couldn’t communicate and had no idea what they were looking at,” Maycumber told the crowd at the packed Stevens County Ambulance Center.

Maycumber said this was the reason she worked on House Bill 2010 in 2019 to help deal with the drastic issues concerning data in the area.

U.S. Congresswoman Cathy McMorris Rodgers spoke at the event, saying that rural broadband is basic infrastructure and the country has to figure it out and close the rural divide.

“We’ve poured millions of dollars into this problem and it seems like you still lose reception on the same spots along the highway,” McMorris Rodgers said.

She added that TV Whitespace could be a new breakthrough as some of the infrastructure of TV broadcasting is already there. There are unused TV channels in the VHF and UHF spectrum that are typically used as buffer channels to prevent interference between active channels. It has since been proven that these unused spectrums can be used to provide broadband internet and don’t require line of site.

McMorris Rodgers added that as a member of the Energy and Commerce Committee in the House of Representatives, bridging the rural gap will be one of her top priorities along with getting better maps from the FCC that say counties like Ferry County are 97 percent covered.

“97 percent… there you go, that’s all you need to know about those maps,” McMorris Rodgers said.

Brad Smith, President of Microsoft, talked about the simple hard stats of the matter. There are 25 million people in the U.S. without access to broadband, and 16.8 million of those people are in rural areas, he said.

He said that Microsoft hopes to work on the problem, bringing broadband to two million and possible three million people by 2022, explaining that Microsoft is working in 25 states with several projects in Washington.

He was asked with low populations in NE Washington and the lofty goal of two million people, why would Microsoft work to bring broadband to just thousands of people in the region.

“We understand that the priority is rural,” Smith answered.

Amanda Six, director of the Stevens County Libraries system, pointed out the high cost of broadband even for meeting points in towns like the libraries.

“At the Hunters Library, we pay for 100 mbs and get 20,” Six said. “Getting fiber in Hunters would cost 900 a month. I pay 75 dollars myself for internet while my friend in Seattle plays 45.”
Another point was made at the meeting, saying that getting internet to libraries is important as it may be the only gateway to the internet for some people in the county who need to use it for employment, healthcare and education reasons.

Six said while internet service providers were given government money to serve underserved areas, they don’t go into the areas because they are not cost effective.
Desiree Sweeney, CEO of N.E.W. Health Programs Association, mentioned how health providers see a slowdown between 3-4 p.m. every day in their networks.

“We wondered what was causing that, then we realized that is when school is out and we’re then competing with kids’ Xboxs and PlayStations for bandwidth.”

The lack of broadband means it’s a struggle sometime for doctors to access files and info on healthcare networks. There are also several other training and analysis services for healthcare workers that are not available in the area because the resources for high speed internet are not there.

Representatives from the Spokane Tribe talked about their program STTX (Spokane Tribe Telecom Exchange) which is trying to make inrows on the Spokane Reservation which has historically not been wired for the internet and not overly served with broadband. Their focus is in residential areas for people.

Stevens County Commissioner Wes McCart told a story about how in 2015, the county sheriff had to drive hard drives from fire camps to places where they could upload the infomation to the internet. He also said when installing infastructure like fiber, there needs to be more coordination on all levels of government.

“They will install fiber along where we have ditches on roads,” McCart said. “If we need to dig up that ditch, what do we do without cutting that fiber and internet to a bunch of people?”

He also suggested that perhaps the county have pre-positioned fire camps with internet and data access already set up.

Talk about a public utilities possibility providing internet, and more coordination because different levels, seemed to be the common theme by many people. It was also pointed out that some public utilities aren’t set up to provide internet, nor is there a port district in the county which could also work on installing internet.

It was also pointed out that technology is always moving, and by the time a specific type of internet infrastructure is installed it could already be behind the times.

One ISP provider from Odessa pointed out that they can provide several different services from cell coverage to DSL for a variety of speeds but it’s big companies like CenturyLink that get the government subsidies. In order to build infastructure, the small, independent providers need to be provided the little pieces to connect everyone together and not just one base technology or method, he pointed out.

A representative for HughesNet said the Low Earth Orbit satellites are being launched that will in the next few years, to provide rural areas with speeds comparable with fiber.

Handouts from the Stevens County and Spokane Tribe Broadband Action Team were also passed out, talking about what strategies the team is taking to bring more connectivity to the region.

“It is encouraging that we are working together at the federal, state and local levels to identify barriers to broadband deployment while working to affect legislation and regulations in order to adequately serve the most rural areas of our state,” Chewelah Mayor Dorothy Knauss, who is a member of the BAT and in attendance of the meeting, told the Chewelah Independent.

CITY OF CHEWELAH: Council will look at nuisance, park issues