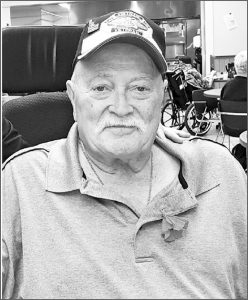 Ralph (Pete) Rohweder was born on October 8, 1938 in Burlington, Washington to Ralph M. and Carol June Rohweder. As a child, Pete attended school in Concrete, Washington, and when old enough, worked in his father’s logging company and sawmill. In 1958, Pete chose to serve his country and enlisted in the Army, serving in Kosovo and France until 1961.

In the mid-60s, Pete put his logging experience to good use in Wrangell, Alaska, later moving to Ketchikan where he was an equipment operator and began his company, Rohweder Equipment. A hard working man, Pete took pride in every job he held, and was a member of the Operating Engineers Union 302.

Leaving Alaska after 40 years, Pete and Carole moved to Eastern Washington, where they enjoyed living in their home on Jump Off Joe Lake for 10 years, and traveling in their RV, wintering in Arizona. Pete had been challenged with many health issues in recent years, and after a valiant battle, passed from this life on April 27, 2019 and is now at rest.

A memorial service will be held at 1 p.m. on June 7 at the Veterans Memorial Cemetery in Boise, Idaho. Pete was a proud Military Veteran, and as such, in lieu of flowers, contributions to the Idaho State Veteran’s Home, where Pete lived prior to passing, would be most appreciated. A celebration of life will be held in Ketchikan at a later date.