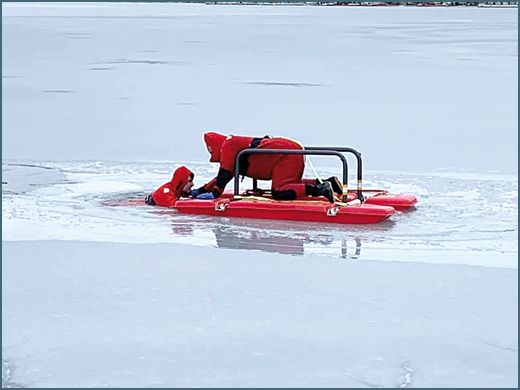 Fire District No. 4 volunteers performed rescues or acted as the victim on Waitts Lake last month. The district has a special sled for ice rescues. (Courtesy photo)

When it’s cold outside, hopping in a frozen-over lake is the last thing people think about.

Yet, 19 volunteer firefighters from Stevens County Fire District 4 took part in their annual ice water rescue training at Waitts Lake last month. While Stevens County is landlocked, there are numerous lakes and bodies of water that may freeze over but can still be a hazard for people when ice is too thin.

Volunteers deployed their Ice Water Rescue Sled and other equipment for drills, so they could become more familiar with using the devices in an emergency situation.

“The firefighters alternated between acting as rescuer and victim, including being fully submerged,” read a press release from Fire District 4. “Everybody agreed it was both critical training and great fun.”

Some birdlife at Waitts Lake also joined in on the fun, inspecting what all the hubbub was about.

Fire District No. 4 wanted to remind people to be aware of ice conditions. Earlier this winter, the ice was unstable and thin, but due to recent cold snaps ice fishing right is now possible on the lake. Being on ice, however, always brings certain dangers.

Clear, blue or green ice might be thick enough to stand on. White ice typically has air or snow trapped inside, weakening it. Dark ice might be an indication that the ice is quite thin—probably too thin. 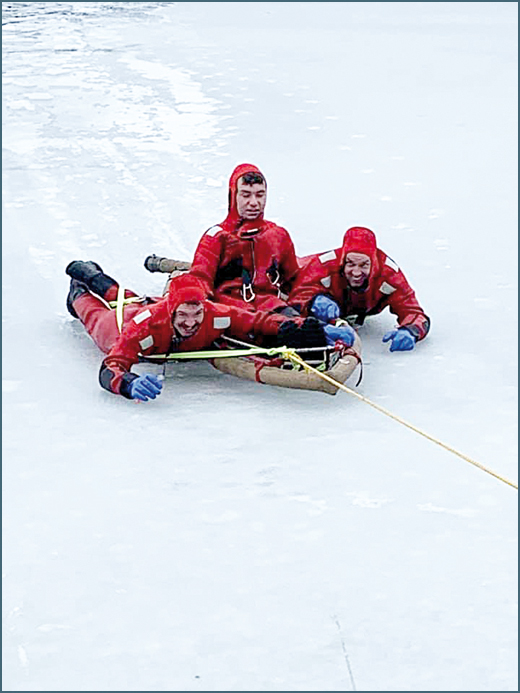 The best way to determine thickness is just to measure it, drill a hole and use a measurement rod just to be sure. Keep in mind that thickness on a lake can vary, and to avoid submersed structures like rocks, stumps and fish cover.

Make sure you wear a life jacket and have an ice pick to pull yourself out of the ice in case of a breakthrough. Always have a backup plan, rope and dry clothes on hand. And never go alone.

Fire District No. 4 averages about two ice-related calls per year, and have already had two calls in 2019. They had to perform one animal rescue and one unknown situation where a person was laying on the ice, not moving.

The district also reminds people to keep a close eye on their family pet as firefighters routinely have to respond to animals trapped or stuck on the ice.

JOIN FIRE DISTRICT NO. 4
Fire District 4 is currently recruiting volunteer firefighters. Join fellow community members helping their neighbors. Take the opportunity to serve your country and your community locally. Be a part of making your community a safer place.

• Listen to official reports and authorities when they say that the ice is too thin. Currently Fire District 4 feels like conditions have made the ice on Waitts Lake thick enough thanks to recent cold snaps
• Never go alone
• Be aware of changing weather conditions, which can affect ice strength
• Test ice thickness using a drill or ice pick
• Dress in temperature-appropriate clothing
• Wear a life jacket and ice picks to help pull yourself from a collapsed pond
• Stay away from submersed structure like rocks, stumps  and fish cover
• Have a backup plan should something go wrong
• Make sure you have a rope and dry clothes on hand

‹ THE BEST WRESTLING TEAM IN SCHOOL HISTORY? Cougars place third, first time in school history on the podium at state › SNOW PLOWS: Whose idea was that?