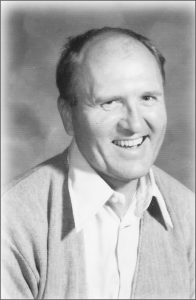 Glenn was raised in Spokane where he attended school and graduated in 1947 from North Central High School. He then began college at the State Normal School in Cheney (now Eastern Washington University). There he studied music, math and chemistry. After graduating with his teaching certificate in the early 1950s, Glenn began teaching in Rosalia, WA. He took a furlough from teaching and entered the U.S. Army. There he served stateside for all four branches of the military. During this time, he played in the Marine Band in Washington D.C. and often reminisced of starting every morning with a presentation of taps. He was honorably discharged but remained in the reserves through the Army National Guard. On January 12, 1957, Glenn married Annette Yvonne Lussier. They began a marriage that would span 51 years from a blind date beginning. Glenn had been teaching in Lamont, WA and later Wilson Creek, WA before relocating to Seattle to study medicine at the University of Washington. He attended school during the day and drove taxi at night to support them.

He returned to teaching. Glenn taught for a time in Spokane and he would later earn his Master’s in Education from Washington State University. In 1966, Glenn accepted a teaching position in Chewelah, WA. He, Annette and their three children then moved to Chewelah where he raised his family. Glenn taught music, math and chemistry for 16 years and during the summer months fought fires and “Rangered” with the U.S. Forest Service.

Glenn loved to play music and could read, write and transpose music often between multiple instruments with ease. In addition to the Marine Band, Glenn also played with the Spokane Falls Community College Jazz group, the Men of Rhythm and with Ron Peterson for the Chewelah Senior Center. He was also actively involved with the Chewelah EMT service for many years.

Glenn was a caregiver by nature. He enjoyed fostering education and humbly offering assistance where help was needed. It wasn’t uncommon for Glenn to take a second trip around the block after visiting someone’s home to ensure they were back inside safely and that their home was secure. He cared for his wife, Annette daily after her stroke at age 39 until her passing at age 73. Glenn also loved the outdoors and would go to great lengths to make sure his oversized and “overweight” backpack had everything from a camp stove, beans, hotdogs and S’mores to the fuel, fire starter and shelter supplies. He was a private pilot with a membership in the Chewelah Flying Club. He took many friends and family members for local rides, and when he wasn’t flying, would often load up a basket full of Dick’s hamburgers and picnic at the end of Felts Field to just watch the airplanes. His Charlie Brown Christmas trees and “Griswald” tree excursions were yearly favorites. His kind, constant, respectful and gentle character was truly offered like that of an unsung hero.

Glenn was preceded in death by his wife, Annette, and son, Lee Arthur.

The funeral service for Glenn L. Salmon will begin at 11 a.m., Saturday, March 16, 2019 at the Danekas Funeral Chapel in Chewelah, WA. A graveside service with Military Honors will follow at 12:30 p.m. at the Chewelah Memorial Park Cemetery, Chewelah, WA. Memorial contributions may be given to the Chewelah EMT/Ambulance Shack. Please visit the online memorial and sign the guestbook at www.danekasfuneralchapel.com. Danekas Funeral Chapel and Crematory is entrusted with the arrangements.

‹ Stevens County Court Records for March 21, 2019 › FROM THE EDITOR: How not to win at youth wrestling