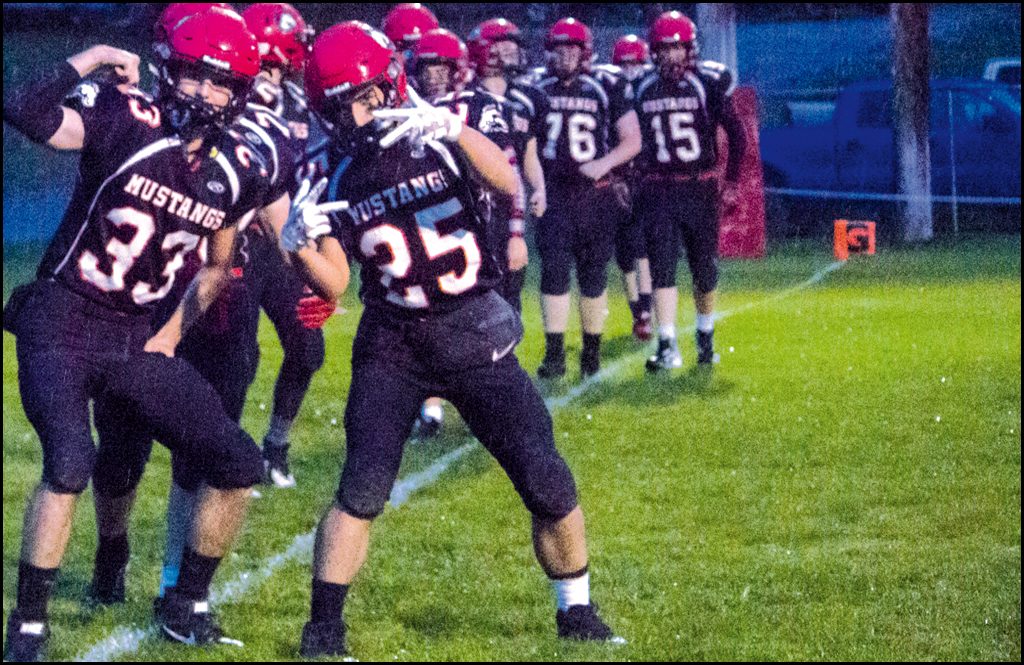 Much like the villain of a 1980s slasher film, you can’t keep Northport down for long.

After dealing with injuries, the Mustangs got Ty Williams back and should be getting some other key pieces back as they continue to rack up the offensive yards in the NE 1B North.

Last Friday, Jahsom Rahif was downright scary with 21 tackles on defense and two big rushing TDs for the Mustangs in a 40-16 victory.

“It was great to see Jahsom break off some nice runs,” Northport coach Kevin Dionas said. “He’s a huge part of what we do and has significant playing time since he was a freshman. He is our leader on defense and is just a very tough kid.”

Then, QB Tanner Malcolm, who owns a Jason mask as a Stevens County Fantasy Football Week 1 trophy, ran for two touchdowns and passed for two more.

The turning point came in the second quarter as the Mustangs unloaded for 24 points to take command of the game. Northport improved to 3-3 on the year and 2-3 in league play, while Curlew fell to 0-5 on the year. After a scoreless first where Curlew controlled the ball and almost scored twice, Malcolm got things going with an 80-yard touchdown run – the third longest run in Northport history – followed by 31 and 35-yard touchdown runs by running back Jahsom Rahif. Malcolm wrapped up the first half scoring with a two-yard touchdown run. Hit by injury, Northport had to work on their offensive line and the new-look line had a great game against the Cougars. The defense also continues to look good for the Mustangs historically as the program averaged giving up 55 points a game, but this year are giving up just 35 points a game thanks a focused but small player core. Curlew’s Bradley Singer got the Cougars on the board with a one-yard run in the third quarter and then the Mustangs took to the air. Malcolm threw a 45-yard touchdown pass to Ty Williams and a seven- yard pass to Clark Cooper to make it 40-8.

“It was great to have Ty back from injury. When he is in the game other teams can’t just key in on one or two guys,” Dionas said.

Singer notched his second touchdown of the game in the fourth quarter. In all Northport was able to handle the win despite the distraction of it being homecoming. Dionas said it was the players who stayed on point and he didn’t need to change anything that week. Malcolm had six passing touchdowns on the season and 10 rushing touchdowns to go along with 719 rushing yards . Rahif bumped his season total for rushing TDs to six and 387 rushing yards. As a team, Northport already has over 1,500 yards rushing.

Morgan Buhl caught a tackle-eligible two-point conversion in the game, meaning all of Northport’s seniors have scored points in their career. Northport will now host Cusick at 5 p.m. on Friday. Northport played the Panthers tough until late in the game last year, and they’ve added some new excellent athletes from other sports this year, Dionas is approaching one of the best teams in the league with grit and determination and so are the kids.