Nick Franks is a basketball and football standout for Chewelah 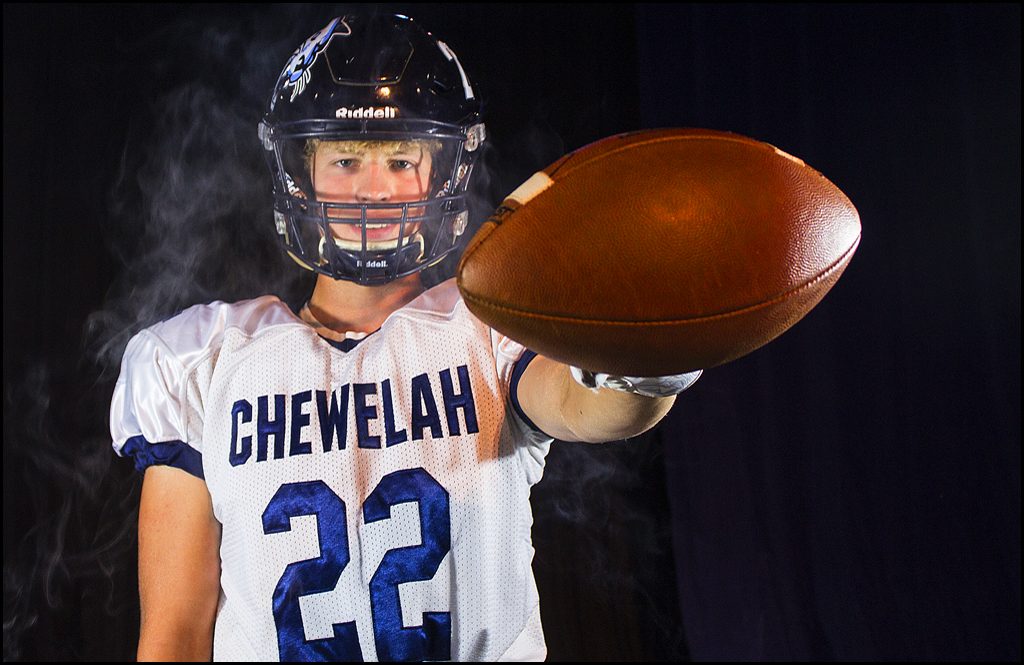 Nick Franks has big play ability on the field and on the basketball court. (Brandon Hansen photo)

Quarterback turned WR is a big target for Cougar offense…

He might be in football pads right now, but Nick Franks turned heads last basketball season and should play a big part in the Cougars’ success this winter. The Cougar junior is a dangerous scoring threat on the hardwood, but the Chewelah football team has also been employing his knack for scoring points on the turf as well.

Seemingly everywhere on the field against Colville last Friday, Franks had six receptions for 147 yards against a speedy and hard-hitting Colville defense. It was a standout performance, and when you realize he was the Cougar’s second-leading receiver, (Fullback Kaden Krouse had 153 reception yards), you’re starting to understand how lethal this offense can be. Franks is fun to watch cutting through opposing defenses with his speed, but it’s shocking to learn the guy only has two previous years of WR experience.

But its hard to beat his ability to go up and get a ball and it might have something to do with the basketball gym. He still finds time to work on his shot three to four times a week but he’s focusing on football right now. The Cougars have started the season 0-3 but two of those loses have come against 1A playoff teams. Chewelah coach Cameron Gump along with offensive coordinator Jim Fisk are working out the kinks against top competition that gives very little leeway.

“Gump is a great coach and a great guy,” Franks said. “I couldn’t ask for a better football coach. He treats us players with respect. He’s pretty serious but knows how to have a good time with us out there.”

Against the defending state champions, the Cougars showed the home town glimpses and while the schedule doesn’t get any easier, it did give the Chewelah hopeful something to gnaw on as the football team continued to fine tune things. The team knows that they have a hard schedule ahead of them, and know if they can continue to learn and improve it will definitely pay off once league play kicks in.

“Our offense is very good because of the execution and the consistency of our players,” Franks said. “The speed and the hands we have in the back field and outside is deadly.”

Jake Jeanneret had a 340-yard passing performance last week which would make any NFL QB jealous, while Kaden Krouse has been doing more catching than rushing lately, but one could surmise it is to save those big hits against him for league play. Keeping him on the outside could keep him healthier than running him up the middle and with Jeanneret, Krouse and Franks making big plays, along with Jake George and Jaron Baldwin, its easy to see why you might fly instead of taking the Kaden train.

“Having Jake and Kaden in the back field is a huge part to our success,” Franks said. “They can get the job done play in and play out, but those guys couldn’t go anywhere without our line. It starts there and I think they need to get the recognition they deserve.”

The Cougar line figured some things out against a large Colville front, and will once again be the key to success in the postseason. They did lose some key players from last year, but return some impressive players as well. Lately, Cole Davis has been a force on both sides of the ball on the line, while the experienced players are gelling once again and getting the Cougars headed in the right direction.

Speaking of directions, Franks needs directions to get to school. The WR lives between Valley and Springdale but commutes to play sports in Chewelah. He started playing baseball in Chewelah in fifth grade so sports in the Blue and White have been familiar to him for years. Franks takes running start, trains for basketball and then heads off to football practice.

“I don’t really have off time but when I do I am usually playing [the video game] Borderlands or something along those lines,” Franks said.

He also finds the time to be part of the Chewelah student section for volleyball games which has grown into the toughest home crowd in the NE 2B North Division.

“We get the largest student sections because of the mutual respect for volleyball and football, so usually when we all show up to the volleyball games a lot of the girls show up for the football games,” Franks said. “The best part of playing Cougar Football is the bonds we make when fighting together out there. I love playing wide receiver because the feeling of connecting on a pass no matter long or short is always a great feeling.”

And in just a few weeks, Franks will be hitting the court in a Cougar uniform for head coach Mike McMillan and fellow football teammates like Jake George and Jaron Baldwin. Look for those guys to be big presences out on the court, and look for McMillan to be pacing up and down the bench.

“McMillin oh man, I have so much respect for him and so much to thank him for,” Franks said. “He always is on me and excepts a lot out of me. He always pushes and I couldn’t thank him enough for that . He’s see the potential in me and wants the best for me. He also puts a lot of time and money into the team and we couldn’t be more grateful.”

The Cougars finished 13-12 in the NE 2B North last year and will bring the core of their team back this year. This has Franks excited for the possibilities this winter.

Also, it gives Franks a chance to put a viscous rumor to rest.

“I am putting this rumor to rest,” Franks said. “Jaron Baldwin does not play the video game Fortnite.”

So without video games holding the Cougars back, who knows what the limit will be this football season and this upcoming basketball season with athletes like Franks on the roster.