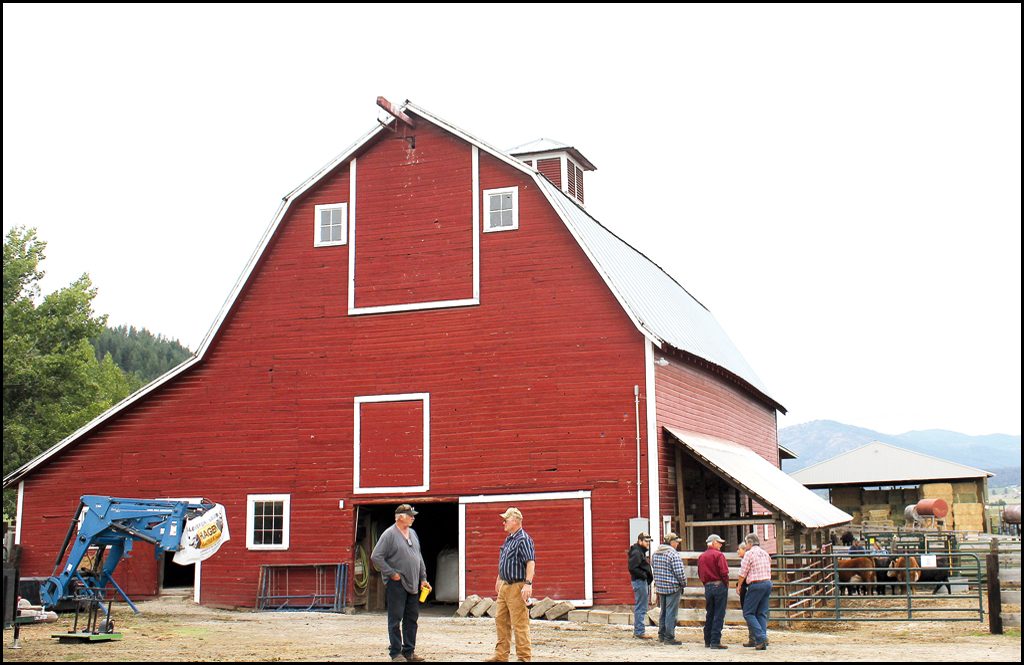 The red barn at Hagen Cattle and Hay dates back to 1916 and according to Lorren Hagen, reminds him of sharecropping in North Dakota. (Brandon Hansen photo)

Dozens of people arrived by invitation to the iconic red barn along Heine Road just outside of Chewelah. Of course they did, because the Hagen family was offering a free BBQ using some of its home-grown beef.

Hagen Cattle and Hay was just recognized as a Gold Total Performance Records Hereford breeder. The program was established in 2005 and recognizes those cattle producers that collect data and traits at all levels of production and report it in a timely manner.

The Chewelah farm was the only one in the State of Washington to receive this honor, and one of eight on the West Coast.

This designation wasn’t the topic of discussion at the customer BBQ last weekend. The Saturday was full of people looking at bulls and cattle for sale, talking about hay, looking at equipment, checking out the modern barn system the family has set up and chasing after the barn cat that made a quick appearance.

Lorren Hagen gave a demonstration on boring hay samples to talk about what testing means and what goes into producing good hay. It’s timing and hard work, and as with most farming, a little luck goes into it as well.

Special-made equipment by local mechanic Reid Christian was also displayed and many farmers got a chance to talk shop in several of the local pastures.

The farm, which has been very supportive of the local Stevens County Conservation District, was part of last year’s Voluntary Stewardship Program’s farm tours for their work alongside the Colville River, as well as field work to reclaim farm land by the Magnasite Plant.

Lorren and Pauline Hagen purchased the farm – 320 acres of irrigated land – in 1988 and have continued to improve and cultivate. It has become a family business with Matt Hagen running the day-to-day operations, while Clint Hagen, wife Emily and daughter Greta assisting with the technology, hay and cattle when needed.

Annual production includes 800 to 1,200 tons of premium alfalfa, alfalfa grass, grass hay and pastureland along with having some prime pastureland for Angus and Polled Hereford cattle. Using a center pivot irrigation system, the production on the fields outside of Chewelah has been plentiful and effective for the family.

Technology improvements by IT guru Clint Hagen include camera monitoring of the barn areas, so the Hagens can keep a 24/7 watch over cows that are calving. This allows for the family not to disturb the animals which keeps them more comfortable during the pre-birthing process. They can also see via the cameras if there is going to be an issue with the birth, and be in the barn when the calf does come. This has improved the Hagen’s calf surviability to nearly 100 percent while having 50 head giving birth in the rough winter months.

Matt Hagen, has set out upgrading equipment, renovating the barn – including redoing the flooring and calf pens and finding more efficient ways for the farm to operate.  Emily Hagen works on the marketing and online services for the farm, while Greta greets everyone attending customer BBQs.

In all, it is no suprise the Hagens are getting recognized as a Gold Total Performance Records Hereford breeder and honored by local organizations like the Stevens County Conservation District. It’s a farm to be proud of and one that spans three generations of Hagens. 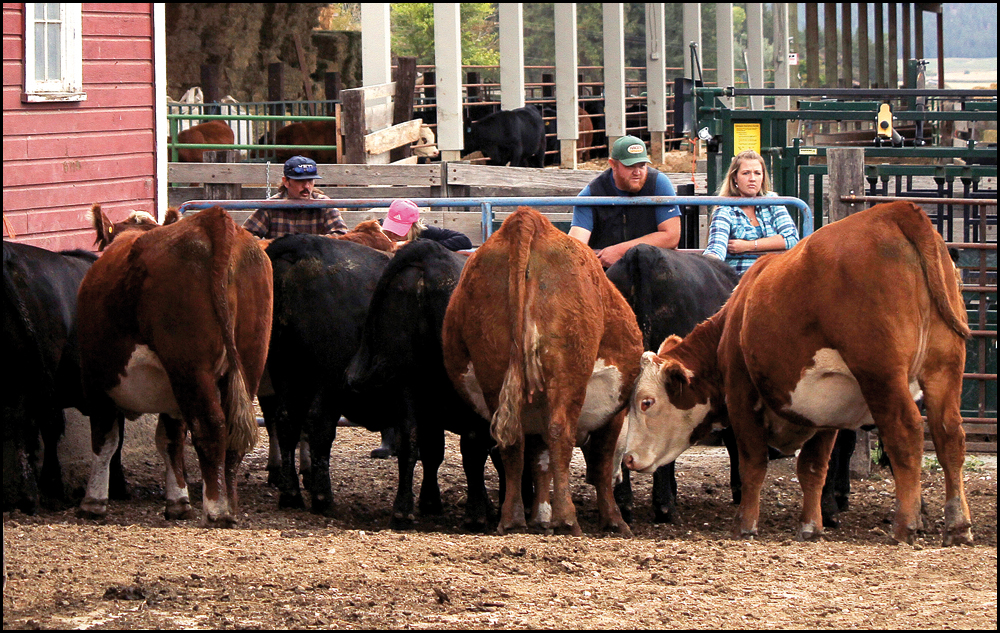 People check out some of the Hagen cattle, who immediatly saw their chance to get some pets from some friendly hands. (Brandon Hansen photo)