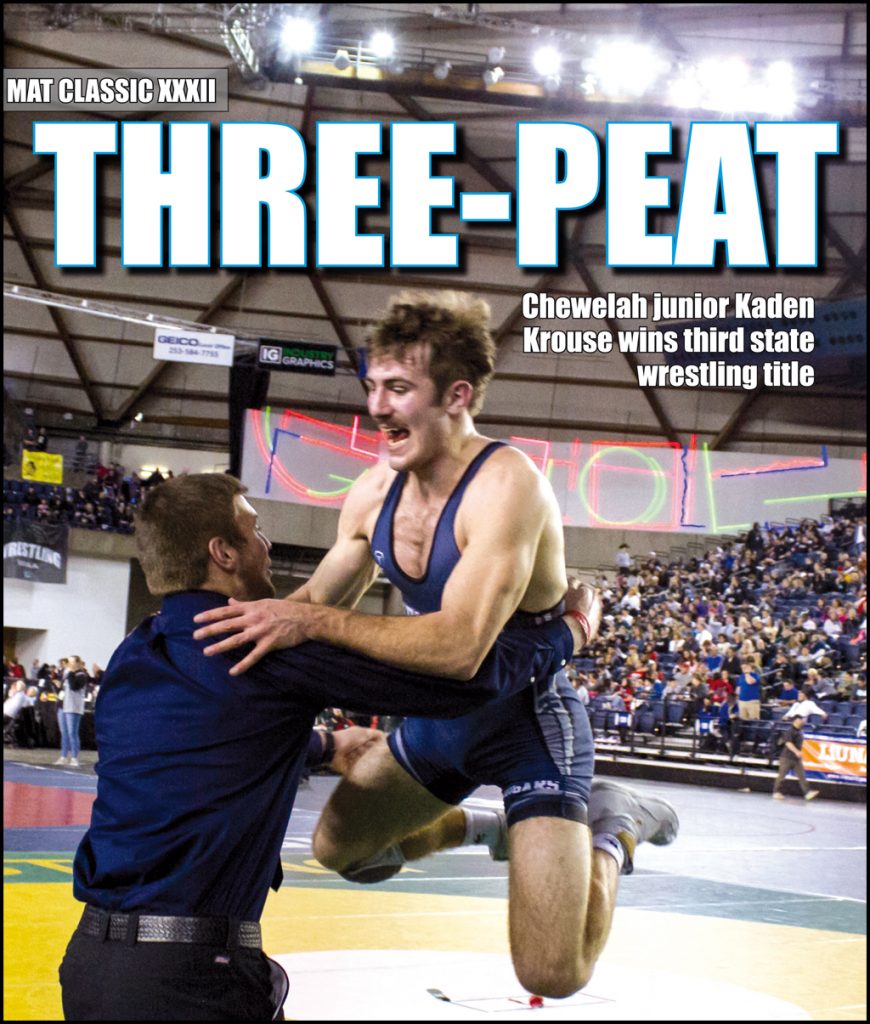 Chewelah junior Kaden Krouse jumps into the arms of his brother Conner Krouse, after winning the 170-pound B state championship at the Mat Classic Saturday in the Tacoma Dome. (Brandon Hansen photo)

Chewelah got its first three-time state wrestling champion on Saturday evening when the referee raised the hand of Cougar 170-pounder Kaden Krouse after he won a 13-3 major decision over Tonasket’s Austin Brock in the title match. In what has become a state tournament tradition, Krouse then ran off the mat, leaped into the arms of his older brother Conner, and hoisted three fingers to signify his accomplishment.

Krouse was one of four Chewelah wrestlers who fought their way into the tournament semifinals and brought home state medals. Cougar 132-pounder Justyce Acosta and 220-pounder Cole Davis both placed second in their respective weight brackets, and 145-pound freshman Clay Jeanneret placed fourth. The four lifted Chewelah to its second straight third place finish in the team scoring. And, all four will return to the team next season.

The 170-pound championship match brought together the state’s top-ranked and second-ranked class 2B wrestlers, but Krouse made it a one-sided encounter. He scored five takedowns through the match and put Brock on his back for a two-point near fall in the first round while yielding Brock three escapes. Krouse led 6-1 at the end of the first round with Brock scoring an escape on a Granby roll. He scored on two single-leg takedowns in the second round to spread his lead to 10-3. Krouse finished with an escape and a takedown in the final round to claim the 170-pound crown by the 13-3 score. 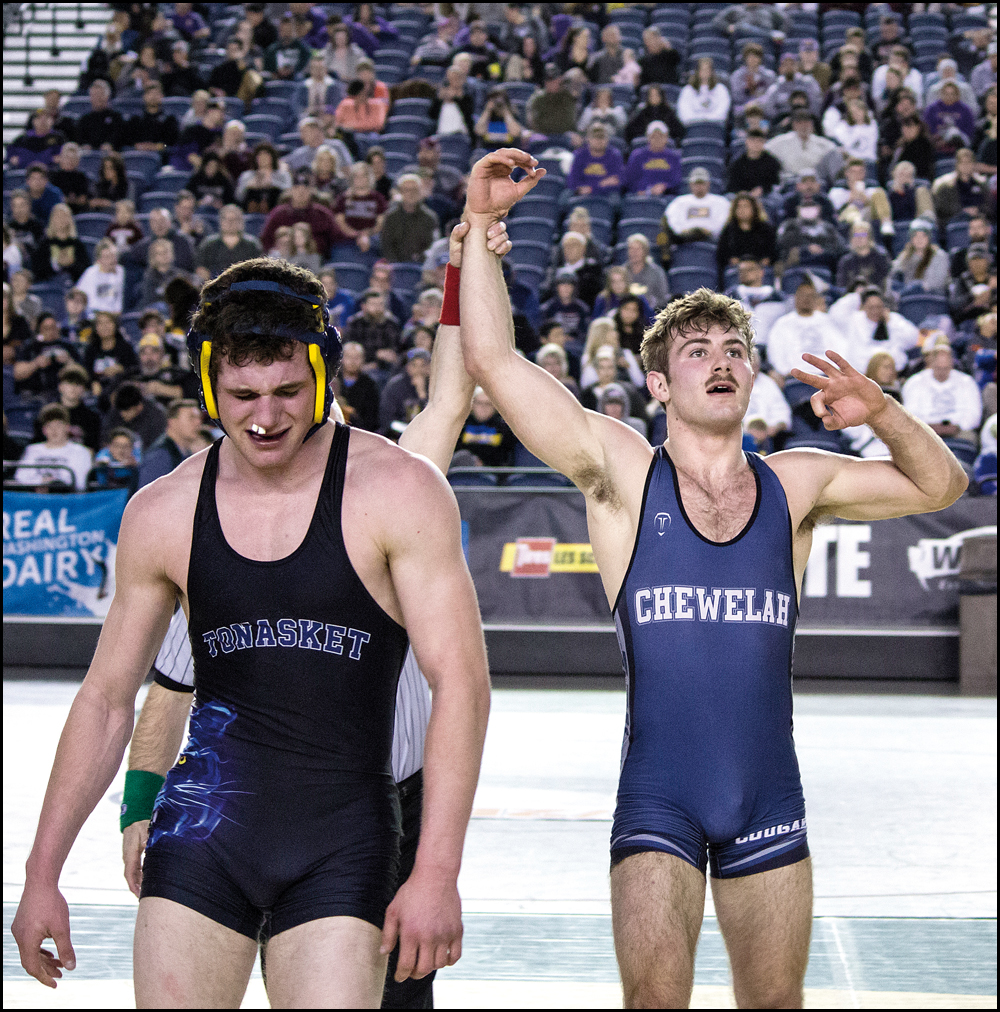 Kaden Krouse has his hand raised after winning his third straight state championship. 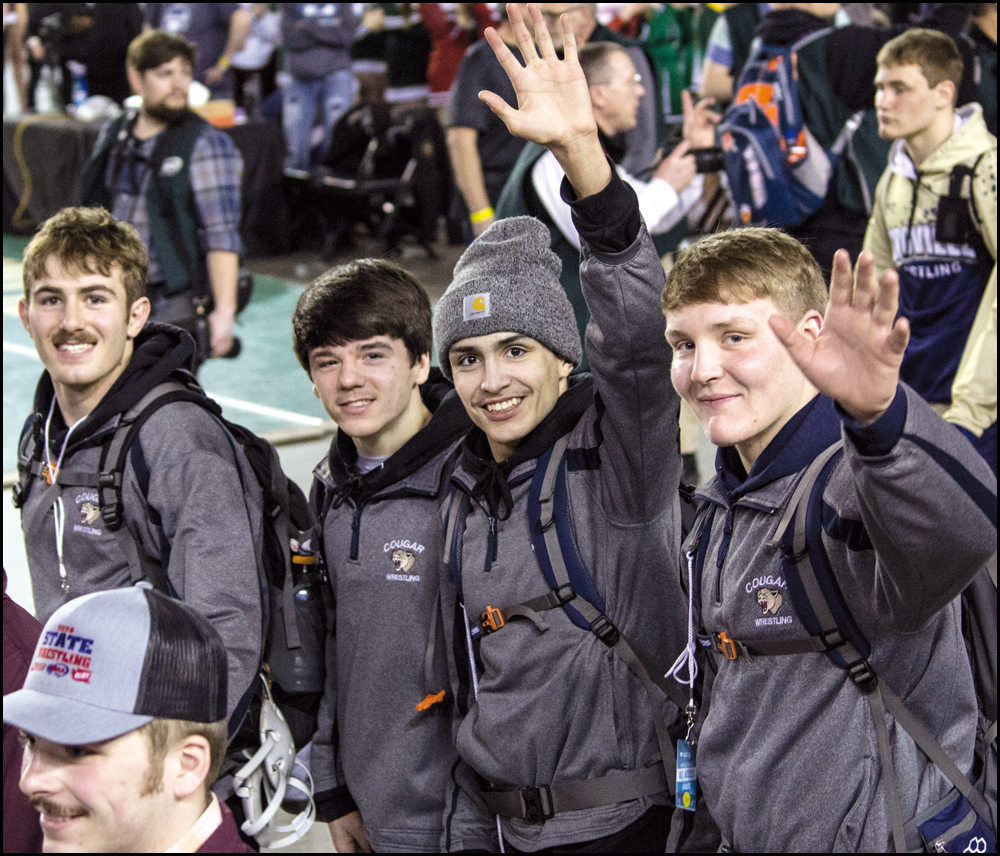 “I watched him in his first matches of the tournament and I knew he would always do a Granby from the bottom,” said Krouse. “So, all I had to do was ride tough on top, stay away from his Granby and not do anything stupid.”

So, when Brock did the Granby roll in the first round, Krouse just let him loose and gave him a one-point escape. In the end, it was Krouse’s five takedowns that took him to the top of the awards stand. Five takedowns always beat three escapes.

In his first outing on the mat, Krouse pinned third-ranked Colby Guzman from Oroville in 2:13. He advanced to the semifinals, where he won a 13-4 major decision over fifth-ranked Paul Jones from Kittitas.

“I came here and watched my brother place at state four times,” said the mustached menace, “and I knew that I wanted to come out on top here four times. It was awesome to have him here. He was here for my first one and my second one, and now for my third one. My goal is to be a four-time medalist like he is.”

Acosta earned his third state tournament medal when he placed second in the 132-pound weight division of this year’s event. He had placed seventh as a freshman and third last year as a sophomore, and his goal for this season was to make it through the semifinals, which he did.

Acosta notched a 9-6 decision over second-ranked Rielan Bretz from Tonasket in his quarterfinal bout.

“It’s feels great to be back in the semifinals again,” Acosta said after the match. “I just want to get past it now, and into the finals.”

In his semifinal match, he made that breakthrough and pinned Damen Jager from Republic-Curlew in just 33 seconds to advance into the championship finals.

“I just stay focused, and not let negative thoughts come to my head,” Acosta said. “The season has been great. I love my coaches and my teammates.”

But then, he was outscored 6-1 by top-ranked Kevin Sanabria from Tonasket in the finals to finish second in his bracket.

Davis’s big win came in the quarterfinals when he handily defeated top-ranked Hunter Olmstead from Concrete by an 8-4 score. Olmstead had placed second in last year’s state tournament and was the favorite to win the 220-pound championship medal this year. However, Davis ended his quest.

Davis pinned Jesus Najara from Tonasket in 5:41 to begin his climb into the championship finals. After defeating Olmstead, he scored a 6-2 decision over Lake Roosevelt’s Trevon Johnson in the semifinals and had Najara on his back when time ran out before he could finish the pin.

“I approached the match with a clear mind and knew my ability was good enough to beat the kid,” Davis said. “State is the goal at the start of the season but once you get there you are always going to want to push for that gold.”

In the finals he lost a 6-2 decision to Josiah Cwik from Liberty, placing second. Davis brought home the fourth place medal from last year’s state tournament and will most likely begin his senior season as the top-ranked 220-pounder.

Defending 182-pound state champion Jake Jeanneret did not get to compete in this year’s state tournament because of a knee injury, but his younger brother Clay represented the family quite well when he earned the fourth-place medal in the 145-pound weight class as a freshman.

Jeanneret pinned his first two opponents, starting with a pin win over Anthony Michel from Kittitas with 49 seconds remaining in the third round. He then shocked second-ranked Keegan Kemmer from Ilwaco, pinning the two-time state medalist in 3:24 to advance to the semifinals.

In the match, Kemmer had Jeanneret in a cradle but the Cougar freshman broke out of it.

“I knew I had to get out of it or I was done, he made a mistake and I capitalized,” Jeanneret said.

Jeanneret’s first loss was to Tonasket’s senior veteran Carsen Walton Tonasket who went on to win his first state championship and earn his fourth state medal.

“It felt amazing,” Jeanneret said of wrestling in the dome for the first time. “It was hard to get the nerves out but after my first match it felt like just another day.”

Now wrestling in the consolation bracket, Jeanneret came from behind on the scoreboard to defeat Trey Rego from Toledo by an 8-7 score to advance to the battle for third place. Here he met top-ranked Alex Plasencia from Davenport who had been upset 11-9 in the semifinals. Jeanneret was pinned by Plesencia in 4:49, but brought home the fourth place medal as a state tournament rookie.

Also competing in the state finale, but not making it to the medal round, were Kristen Erickson, Zeke Crocket, and Cole Piepgras. Missing was Cougar 155-pounder Amber Glover who qualified for the tournament but was unable to compete because of a broken arm.

As a team, the Cougars placed third in the 2B totals with 82 points, all from the team’s four medalists.

As expected, Tonasket won the team championship with 294 points, but Chewelah went 3-3 against the Tigers in the Dome. Liberty was second with 123 points. Reardan placed fourth. After losing Jake Jeanneret to an injury, the Cougars had been dropped to fourth place in the state team rankings, but the Cougars advanced four wrestlers into the semifinals to claim their second third place trophy. Three are juniors and one is a freshman, so they could all be back in the Dome next season. In addition, Crocket and Erickson are both sophomores. So, Chewelah has the potential to return six wrestlers with state tournament experience. Plus, add Cougar sophomore Amber Glover to that list. This will be quite a nucleus to build on.

Matthew Hess placed fifth in the 120-pound state bracket. Springdale finished 13th out of the 40 class-B teams in the tournament. 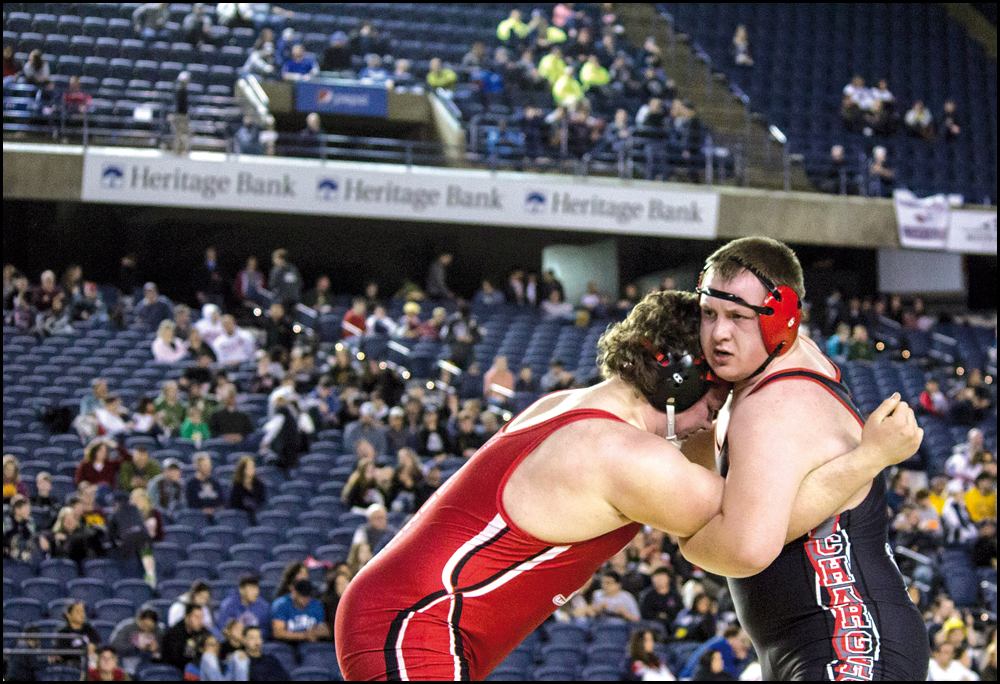 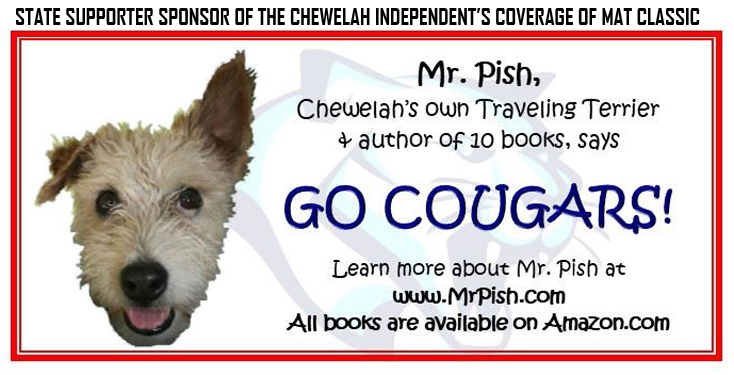