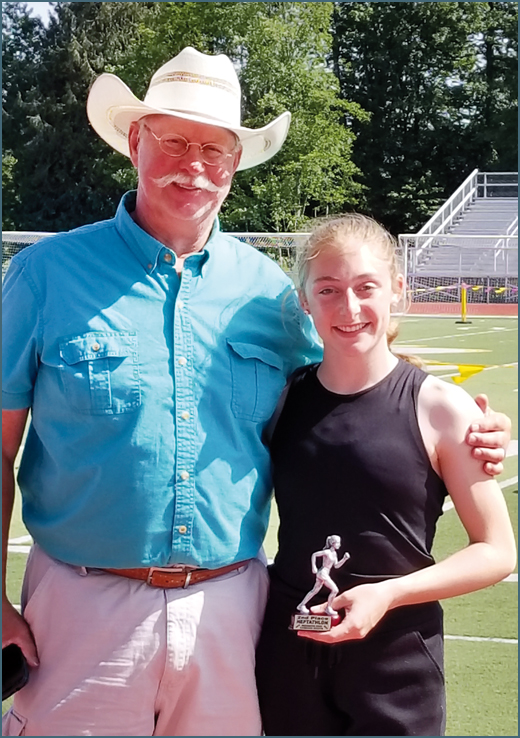 From running to throwing to jumping, Kirry did it all against some of the best athletes in the state at Lake Stevens High School last weekend. (Courtesy photo)

Fresh off winning two state titles at the State 2B Championships two weeks ago, Chewelah’s Lily Kirry traveled to Lake Stevens High School to compete in the State Heptathlon where 32 competitors were invited from across the state. Kirry finished second in all WA classifications with 4190 total points. Brady Alaina, defending champion from 4A school Tahoma, placed first with 4941 points.

“It was a great experience for Lily and something she can hold onto moving into next year,” said Chewelah Track Coach Whit Baker.
Kirry already has four state titles to her name for the Cougars, but came into this heptathlon being experienced in only two of seven events. She learned fast, however, in a week of training. She was able to place 20th in the high jump (4-5.5), 13th in the javelin (79-0), 11th in the shot put (27-27.25) and fifth in the long jump (16-6.5).

“The thing about the heptathlon is you can’t go out and try to win every event, you’re going to get hurt,” Baker said. “You have to go out with the mindset of just doing your best and PR-ing at every event.”

For Kirry, her long jump mark would have placed at the state championships, and her shotput throw might have the Chewelah track coaches seriously thinking about putting their state champion hurdler into the throwing pit as well. Apparently her favorite new event of the whole meet was the shot put. She also got to know Colville athlete Kassi Brooks who competed at the event and placed 18th overall while winning the shot put event.

Kirry also hadn’t ran the 800-meter race since middle school and was new to the javelin but made the throw seemingly effortlessly.

“Javelin tends to put strain in kids’ lower backs,” Baker said. “Lily already had a sore shoulder from volleyball, so it’s really an awkward thing to do if you haven’t learned before. But she did a good job and enjoyed it. “

The meet may signal a little bit of a break for Kirry, except for float trips as Chewelah’s Distinquished Young Woman. Then once summer break is over, be sure to catch Kirry on the Chewelah volleyball team.