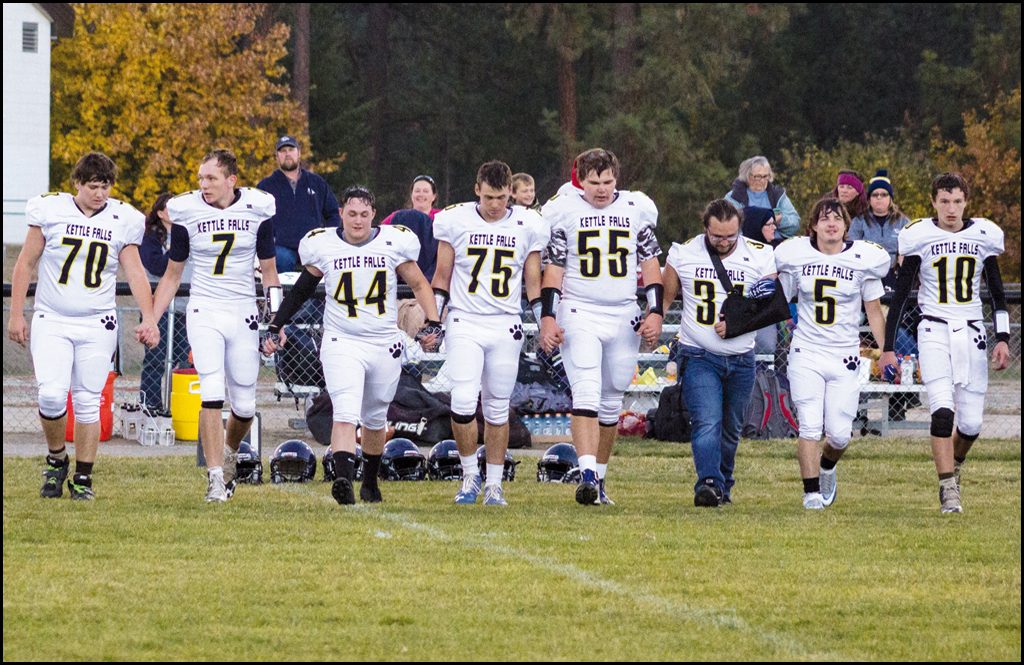 Get ready for a bigger, faster Kettle Falls…

Football is a numbers game and it appears the numbers are on Kettle Falls’ side. The Bulldogs have a lot of returners coming back, and with a lot of seniors and juniors and a gigantic sophomore class, they could see much improvement in the 2019 campaign.

Starting under center is Talon Olson, who has returned for his second year as quarterback and will be hard to ignore on the field as he’s gotten faster and stronger. Standing at 6’2” he will be hard to miss out on the field. Olson will be a presence both running the ball in Kettle’s hard-nosed offense and can pass the ball well.

But that isn’t the only Bulldog with bite. In the trenches, fullback Mike Crumpler will stand out as an athlete. Kettle Falls Head Coach Loren Finley said he has D-1 athlete qualities.

“He is a man in a child’s work, he is going to be that big on the field,” Finley said.

Aaron Olson and Mathan Finley will be key in the backfield, and Nick Anderson will be a hard-hitting defensive player. On the line, Kettle Falls averages 200 pounds and got bigger and faster from last year as well. They may have spent some practices flipping tractor tires on the football field, so you know they’ll be bringing some Stevens County grit to games.

With mid-30s turnout in the 2B ranks, Kettle Falls is one of the biggest programs in the league. The team is hungry for wins and having a strong foundation along with a deep roster could bode well for the present and the future.

The Bulldogs have also been hitting the weight room all summer and look to take on a NE 2B North Division that is small in size. Kettle Falls has just three league games – Davenport, Chewelah and Northwest Christian, and had to fill the rest of the schedule.

Chewelah is highly regarded, and Finley said it’s one of the hardest hitting teams they’ve seen, but NWC has seen a big drop in numbers. With Davenport struggling last year, Kettle Falls could be the up-and-comer and has the most potential moving forward in future years.

“We have a big core of returners and they’re the base of this team,” Finley said. “They have really bought into the program and they’ve worked hard. They’ve been accountable to each other on how much they work.”

‹ FROM THE EDITOR: They don’t build them like they used to › After years of service, St. Joseph’s Long Term Care Unit now officially closed