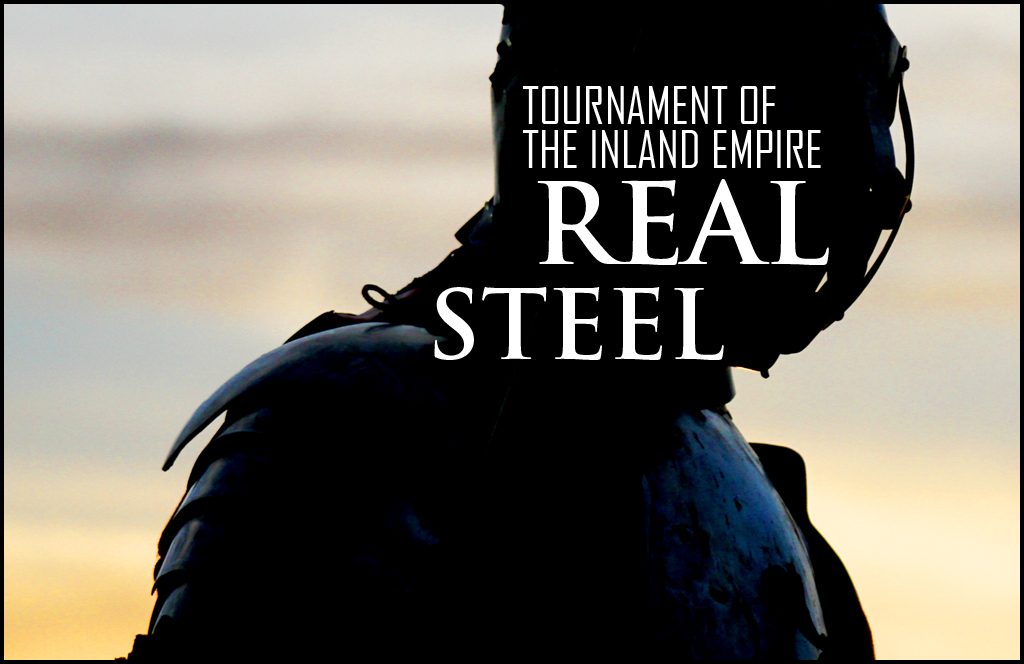 The armor was real at the Tournament of the Inland Empire. (Brandon Hansen photo)

As with most things, history isn’t what Hollywood has on the big screen.

For the jousters at the Tournament of the Inland Empire on June 1-2, its historically accurate 15th century style of jousting is safer than anything you might see in a movie.

“There is a lot of people who seem to think that there is only one style of jousting, which people typically associate with Hollywood where the rider falls off and the winner is declared,” Epona Equestrian board member Alex Tull said. “In actuality, there are many different styles of jousting that varied per region of origin and time period.”

The organizing group for the event, the Epona Equestrian Team, trains three days a week year round, uses specially designed tips that shatter on impact and produce the least dangerous splinters as possible with their spiral cut design. It also doesn’t push the horse rider off the horse, which as most riders can attest, isn’t a fun or safe experience. 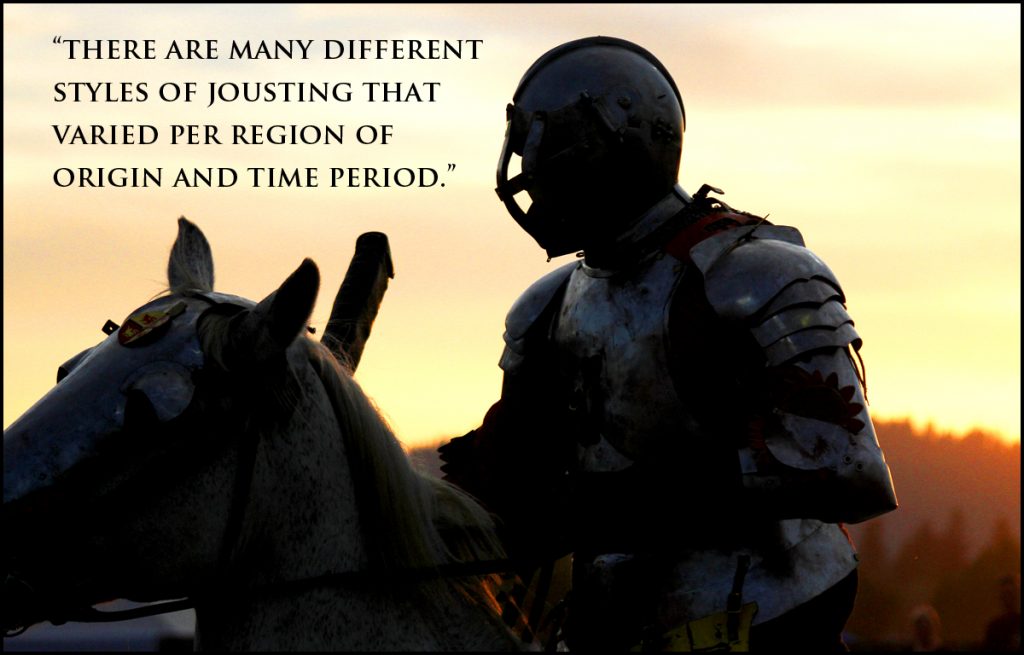 For the jousters at the Tournament of the Inland Empire on June 1-2, it’s historically accurate 15th century style of jousting is safer than anything you might see in a movie. (Brandon Hansen photo)

“The armor and the equipment required for this style have many safety features such as narrow eye slits and incredible neck protection,” Epona board member Tieg Thornton said. “Plus every jouster’s armor, although different, has to adhere to the same safety requirements. Jousting is a sport where there is no defense. As a jouster you have to make sure to give a clear target to your opponent. This helps ensure that both competitors have as even a chance as possible to score on one another.”

“We also train in our equitation to ensure that when we joust the riding can be as second nature to us as possible,” Thornton said.

The two-day Tournament of the Inland Empire has been held at the Clayton Fairgrounds and lasts nearly two days, with more than just jousting. Medieval combat skills are on full display with experts showing how archery, sword fighting and other techniques were used in the past. The long sword fighting event broke every Hollywood stereotype in the book.

Featuring two competitors in a ring, instead of longsword swipes dismembering foes, it was a technical display that involved pin-point moves and even some shoving by the competitors to get a better position on their foe.

“When it comes to sword fighting, Hollywood has also perpetuated a myth that it is all wild swinging with brute force and edge-to-edge contact but in reality a trained swordsman would learn techniques from swordmasters and try to win the conflict in as few moves as possible with as little damage to themselves and their equipment as they could manage,” Epona board member Brian Thornton said. 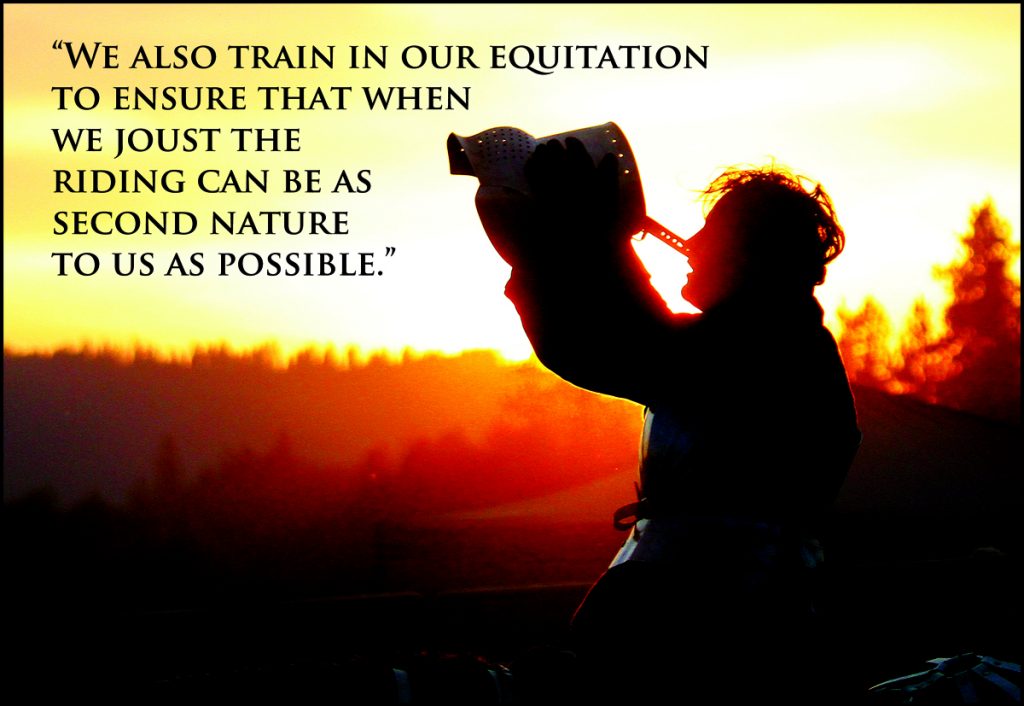 Long sword fighting at the event was done by the group Iron Crown. Competitors wore quilted armor and face masks to protect themselves and blades weren’t sharpened along with the tips being capped for obvious reasons. Using ring judges, competitors employed a variety of styles and moves against each other.

“Similarly to how you would think of the intricacies of eastern martial arts and how skilled those who are trained in it are, Western European martial arts are as well but don’t seem to get recognized in the same way,” Brian Thornton said. “This could again be a product of pop culture and popular films depicting European swordfighters as someone who is only competent at swinging a sharpened baseball bat.”

While a small event, a group of roughly 30 people are involved in the organization, and it’s no easy task from participating in events, judging them, ensuring they’re performed correctly and myriad details mean people are busy during the tournament. Factor in that horses also have to be tended to and cared for, and it’s impressive that an event like this even takes place in Clayton.

Epona is a small group based out of Spokane and is separate from the international entity SCA (Society for Creative Anachronism) but some members from Epona also participate in the SCA group renowned for their impressive and large medieval recreation events.

“When we founded Epona, we were very limited to jousting only one month out of the year and we decided to become a traveling troupe to expand our opportunities,” Tull said.
Since then Epona has performed in Oregon, Arizona, Idaho and Utah along with Washington.

“We have performed at renaissance fairs, county fairs and other exhibitions for events,” Thorton said.

The board members said that since people havent seen events like this before, they’re usually pretty open to learning more about what the group does and ask open-ended questions.

“Sometimes we get comments like ‘your horses are too small,’ ‘a real knight wouldn’t hold a sword like that’ but those are statements that we again attribute to Hollywood and its relationship with shaping people’s perceptions of history,” Thornton said. “We do get compliments on our riding skills which makes us feel more validated in the time we take to practice with our horses.”

The group also asked for people to bring cans to the event, and over 90 cans of food were brought for the Second Harvest Food Bank.

For more info on the Tournament of the Inland Empire, go to facebook.com/inlandjousting/.

For more info on the Epona Equestion Team, go to facebook.com/eponateam/.