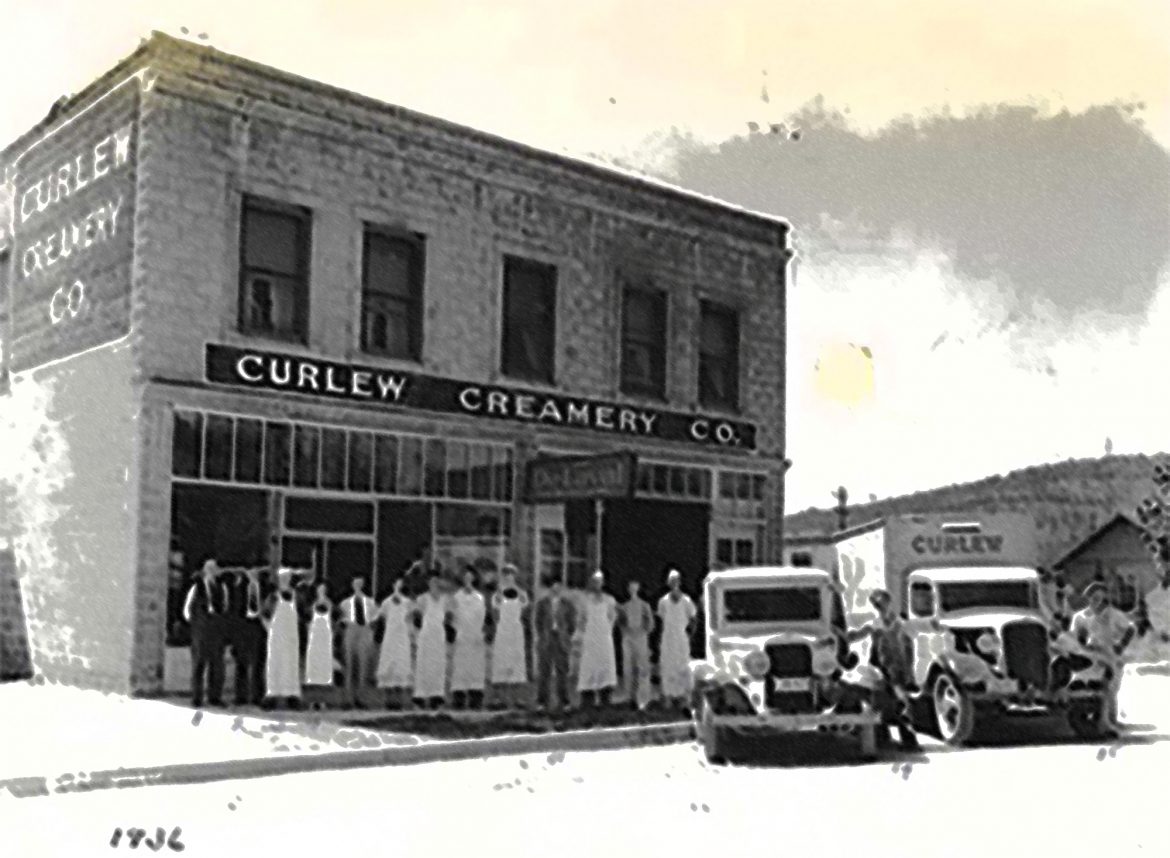 When I was a kid, our family lived in a small two-bedroom house that sat where Randy’s Auto stands today. We rented it from the Curlew Creamery from 1949 until about 1955, which was then a large, two-story building just to the west of our house on the south side of West Main Street. The creamery bought raw milk and separated cream from area dairy farmers and processed it into milk products. The upper story of the creamery building held four small apartments that were also rented. My family rented one of those apartments before moving to the house next door.

My earliest memory is of me, as an infant, banging a glass baby bottle on the side of my crib and breaking it in our apartment. The apartments did not have bathrooms, but there were tiny restroom stalls in one of the halls. They originally had hook-type latches, but they had all been removed by the time we lived there, so it was common for me to open the door and hear one of the lady tenants scream. I remember clothes lines on the roof on the back half of the building over the top of the firewood storage bin where my mom would hang her wash to dry. One day, I asked my mom if she could chop wood. She said she could, so I badgered her until she took me downstairs to the wood storage room where she proceeded to quickly hurt her back, which put her out of commission for several days.

According to Walt Goodman’s 1968 article in The Independent, The Curlew Creamery Company originated in Curlew, Washington, of course, back in 1908. It was founded by John and Guy Humphrey, who later expanded their venture by building the Chewelah creamery in 1920. Former Chewelah Mayor Everett Jenne worked for the company in Curlew, became the assistant manager of the Chewelah Creamery in 1923, and then became the manager of the plant in 1924.

At first, milk and cream shipments were delivered by railroad, dropped off at the Chewelah train depot, and hauled two blocks to the creamery by truck. Evaporated milk was condensed, then canned. The cream was made into butter or processed into ice cream and other dairy products, and frozen in natural ice. Later, two compressors were installed so the plant could refrigerate cold rooms and freezer rooms and make its own ice. These two compressors were located in the western garage bay, and the ice tanks for the 120-pound blocks of ice were in a wooden addition to the plant on the west side of the building next to the garage.

The compressor room was a place where neighbor kids could crawl through the window and cool off on hot summer days because the pipes coming out of the machines were coated with a couple of inches of frost. Once, one of the kids licked one of those pipes and got his tongue stuck to it. Yup, that kid was me. I would still be stuck there had it not been for my childhood friend Janice Flyckt Burya running into the creamery to get help. It took several buckets of warm water to dislodge the tongue. Luckily, it healed, but I lost the top layer of skin, so my tongue is extremely sensitive to hot and cold, like ice cream and hot chocolate.

Around 1930, the Curlew Creamery had a fleet of 10 trucks that picked up raw milk and cream from the local farmers. This milk was transported in metal milk cans, which was the way it was done when I lived next door. I can still hear the clanging of the cans as they turned into the driveway on the west side of the building. Full cans made a distinctly different sound than empty cans, I recall. I likewise remember farmers bringing milk and cream to the creamery in sleighs drawn by horses or mules during the winter. The creamery would have the excess snow in the driveway piled up in a tall mound, and we used to slide down it on our bottoms through the frozen horse manure.

The creamery also offered a delivery service that carried groceries, feed, milk products, and other staple items to the farmers when the trucks drove their routes twice a week. It also sold milk, cream, butter, and ice cream to local stores.

At its peak, the creamery employed 41 people in the 1940s during World War Two. The Chewelah operation focused on producing as much evaporated milk and butter as possible for the war effort. Evaporated milk, butter, and cream for ice cream were shipped to the Curlew Creamery in Spokane to support its expanding sales in the growing city. The Spokane branch of the company was a strong supporter of Gonzaga University football.

Brougham Thompson was the manager of the creamery when we lived in the house next door. His son Ken Thompson often contributes to the conversations on You Know You’re from Chewelah When… Facebook group. This is the internet site where people share stories, experiences and historical information about our community. I contacted him to find more information about the creamery that I could not remember.

“While dad and a small crew was making butter, there were 20 employees canning evaporated milk in a different room of the plant through the Korean War,” Ken recalled. “The government was buying all the condensed milk and butter that the creamery could produce.

“After the Korean War, the Curlew plant was shut down and the Chewelah operation was scaled back because the government was no longer purchasing milk products. The creamery then focused on collecting cream, churning butter, and shipping cream for ice cream. Ice cream production in Chewelah had stopped after World War Two. The plant was run by my dad and Stu Duncan, with some part-time help to hand-wrap the butter.

“By this time, milk production had become a big business. Big tanker trucks from Spokane now collected milk from the big dairy producers, but they would only stop at farms that milked 25 cows or more. So, dad would collect separated cream from the smaller operations, and he would drive to dairies on the roads that the tanker trucks could not navigate. Half of the cream was churned into butter in Chewelah. The other half was sent to Spokane to make ice cream. Curlew ice cream was premium quality ice cream.

The Curlew Creamery was sold to Darigold in 1956. Its demise was a blow to the Chewelah area. Brougham Thompson had to leave town to find a job with Benewah in Spokane, where his union wages in Spokane were higher than he had earned as a plant manager in Chewelah. He was able to operate the plant until June of 1957 before Darigold finally shut it down. However, of greater impact of the closure was the loss of a flow of income to many local farmers as far north as Kettle Falls.

Randy’s Auto now occupies the site of the old Curlew Creamery. His office is where our house used to sit. The block building where his shop resides is where the creamery used to stand. The creamery was purchased and totally demolished by the City of Chewelah. It was rebuilt as the home of first the ambulance service and then of the water department. It was later vacated when the city completed its new Public Works facility west of town. Randy Dollar purchased the building in 2015 as the new location for his auto repair shop.

Chewelah and near-by residents 70 and older fondly remember the positive contribution to the area commerce and recall enjoying a Drumstick or Eskimo Pie retrieved from the walk-in freezer.