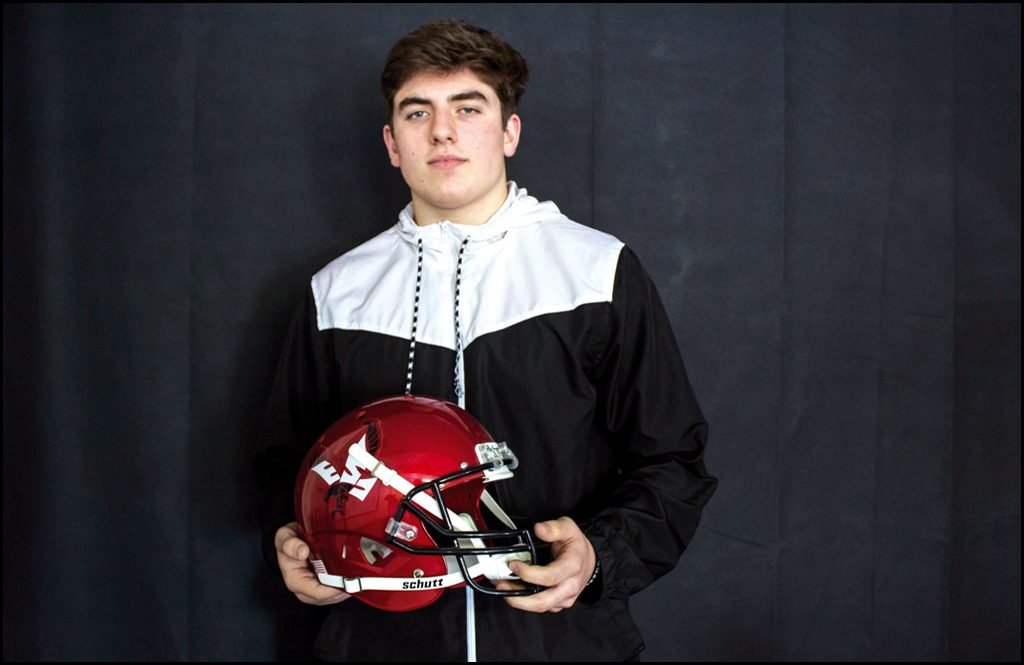 Having a national title-level college football program like Eastern Washington University just down the road is something special and even moreso when local kids can get recruited by the Eagles.

EWU has been home to the likes of Chewelah greats Greg Belzer, Jess Trampush, Keith Garner and more, while even retired Eagle football coaches like Dick Zornes end up here in Chewelah. There is a strong connected between Stevens County and the “Harvard of the West Plains.”

That connection extends up to Colville, where 1A state champion Indians are sending defensive lineman Jacob Newsom to the next level. Newsom was part of the 2019 recruiting class for the EWU Eagles, deciding in February he wanted to play college ball there.

Newsom was part of the Colville football program that has won seven straight league titles, and this year’s magical run to a state title. The Indians won 11 straight games, defeating Newport in the Tacoma Dome to be top dog in the 1As.

Newsom was a big part of that, but was almost not even in the state for this football season. His parents had moved down to Mississippi during his second semester of his junior year and he followed along.

He, however, wanted to continue to be a part of Colville football and moved back up with his parents for his senior year.

“Colville football is amazing, it is the reason I came back up here, it’s a true family mentality,” Newsom said. “Coach Randy Cornwell really cares as does Coach Carp and Coach Roy. I talk with them everyday.”

Newsom said he started going to camps his junior year at Tyson State, Northern Arizona and at Idaho.

“The Idaho Vandals had a three-day camp with pads and that’s where I feel I got my name out in the Northwest,” he said.

Rocky Mountain College offered Newsom a spot on their football team and that’s when Newsom said he realized that he could actually play at the next level.

“Throughout my senior season my coaches and teammates helped me out a lot,” Newsom said. “They put together a video of me playing and sent it out to a bunch of colleges and showed me how to approach recruitment and what to say.”

Colville did have a direct connection to EWU in that Coach Carp played for them, and the team also attended the Eagles summer camp on a regular basis.

“In team camp we work on skills for a primary and secondary position and then we scrimmage about 3-4 times,” Newsom said.

Newsom had watched EWU’s run to the national title game against North Dakota State from the stands and took his official campus visit in February and hung out with some players while also talking with Coach Aaron Best and assistants.

“It felt like home,” Newsom said. “Everyone was genuine. I enjoy Cheney, I’ve lived in small towns all my life, not a big fan of the big cities, right in between campus, and then you can go for a drive and be by yourself and nature.”

For EWU it was hard to ignore Newsom’s stats of 143 career tackles, 15 sacks and one interception against state power Royal. Newsom this year was named the NEA League co-MVP while earning all-league honors on both the offensive and defensive line. He had 78 of his tackles and six sacks as a senior as Colville posted a perfect 6-0 league record. They offered him a preferred walk-on spot along with Northwest Christian running back Silas Perreiah.

(So Chewelah players can say they played against two EWU Eagles during their own run to the state playoffs and the quarterfinals.)

“Colville was a state champion, and a lot of that was due to Jacob Newsom. He’s a great wrestler too. He’s an Eagle-kind-of-guy with great grades, great in the community and a great player,” EWU Head Coach Aaron Best said. “He has some versatility to play on the outside if needed, but we project him to be an inside defensive tackle. We’re excited to get a local product with his caliber onboard.”

Best said he was also impressed with Newsom moving back to Colville to finish his senior season, saying that it shows Newsom likes to finish things he started.

“It really seemed like a brotherhood, all the players were hanging out and joking regardless of position,” Newsom said. “They seemed really close.”

Newsom also liked Best’s intensity and compared it to how intense Colville coaches can be as well.

After committing to EWU, he then went to the Mat Classic, and helped his team win a state title in wrestling and was placer.

This for a guy who hasn’t wrestled since eighth grade.

“I loved basketball in high school but when I came back my senior year, the basketball program was going through a transition and since I had wrestled growing up I figured I would give it a shot again,” he said.

So if you’re watching the Eagles on the red turf this year, make sure you keep an eye out for a familiar face. It might be a local Stevens County kid making a big difference on a national stage.

‹ The Chewelah yard sale day is coming! › Truck driver recounts gun being pulled on him while hauling through Stevens County