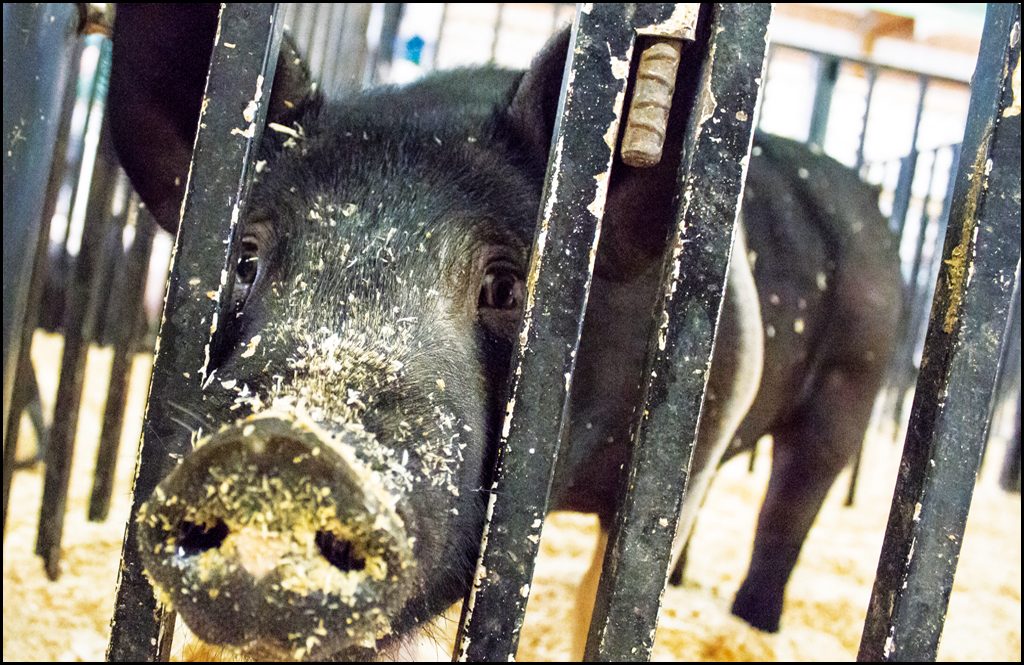 This pig has a nose for news. (Brandon Hansen photo)

FUR, FEATHERS, HOOVES AND SNOW CONES: Here is how you enjoy yourself at this weekend’s NE Washington Fair in the big city of Colville..

The weekend is upon us all where we tie a big bow on the summer and get ready for fall. The NE Washington Fair is about to kick off, and it will no doubt be a flurry of animals, food, music and much, much more.

The NE Washington Fairgrounds will be full of activity this weekend and this is how you can have a good time while avoiding animal droppings in all the barns.

GIVE THE ANIMALS YOUR OWN NAME
While most animals have names given by their owners, I usually make up my own names for them. Ducky McDuckFace, Grump the Rooster and I still can’t remember the actual name of the famous donkey at the fair, so let’s call him Chuckles. Something ironic, because he always looks like someone just installed four more roundabouts in Colville.

DON’T LEAVE ANYTHING OUT IN THE GOAT BARN
I am pretty sure a goat ate my notebook at the last NE Washington Fair which is why this extremely well-quoted story about the fair never got written. Instead you just have me rambling. You can’t trust goats; they eat everything.
Perhaps you can use this to your advantage and get a pet goat. Bills you dont want to pay? Eaten. Those annoying junk mail things you get? Scarfed down. A lazy ex husband? Well, I’m not here to give anyone ideas.

DON’T BE ALARMED IF YOU SEE SUITS OF ARMOR
No, this isn’t the scary militia everyone is talking about in Stevens County, these jousters are from Epona Equestrian Team based in Spokane. They hold an event every year in Clayton, and guess what? They’re coming to the Fair this year! They will be jousting at 6 p.m. on both Friday and Saturday nights, probably prompting a bunch of people in big trucks to attempt the same but with Busch Lite cans later in the evening. We will call that second-jousting.
But if you want to see the actual professionals, watch the Epona Equestrian Team. It’s crazy and amazing what they do!

BRING YOUR KID
Of course you bring your kid to the fair. There is Kid City by the food court that is a miniature town for kids to interact in. There is also a nature exhibit for kids close by as well as a hay maze learning area. Miss Wendy will also have free crafts by Gramma Deanies Ice Cream booth. So parents, you can sneak off to the beef barn or whatever you planned on doing while your kid has fun.

ADMIRE ALL THE EXHIBITS
The NE Washington Fair has one of the most impressive exhibit halls that you will see around: from hand-crafted drawings of smiling anime toilet paper characters, to large zucchinis the size of a small Volkswagen to the large collection of LEGO projects by kids.
I tried to enter a LEGO project last year and got “Why does a 34-year old man play with Legos?” and “Don’t you have a life, this is kind of creepy” and “Wait stop him, he is using this as a ruse to steal all the legos at the fair.”
Some people are just judgmental.

ENJOY THAT THERE (HOPEFULLY) ISN’T SMOKE
This might be the first year in a while the whole county wasn’t burning down, so enjoy the 80s temperatures and the blue or partly cloudy skies. Talk a walk down the vendor path or check out the awesome variety of food at the fair. I tend to stalk the massive block of fries-maker guy. You know the vendor, the one who makes a concrete block of fried potato that if produced en masse could probably construct a palace to all things fried. The Irish in me is just tap dancing.

CHECK OUT THE DOG SKILL COMPETITION
I can’t get my dog to come when I yell at it, so when people actually have control over their pets, it is very impressive. Last year, one person got their lab to make me a latte, double-shot with foam. It was impressive.

MAKE SURE YOU GET COFFEE BEFORE THE PARADE
Colville is a bunch of early risers, with the Parade being at 10 a.m. on Saturday. I wasn’t prepared for this last time, and while trying to get coffee at a drive-thru stand, actually became part of the of parade.
Colville has nice, wide streets which is nice for kids to pick up candy, and there is plenty of room on the sidewalks. It’s not like the Chewelah Chataqua and Valley Fair parades where people are having Thunderdome-like battles for the best corner spot in the shade.

BE PREPARED TO BID AT BOTH THE BIG TREE SALE AND THE STEVENS COUNTY CATTLEMEN’S FAT STOCK SALE
It appears that both sales are the who’s who of Stevens County. I remember one time contemplating buying a tree at the tree sale, and then Russ Vaagen destroyed that dream by bidding some amount that was like my monthly paycheck or something. Maybe it was the value of my car. I can’t remember.
The fat stock sale is a fun go because it’s the only event that has me comparing myself to farm animals. “You went for how much?” I say to a pig waddling around the small show grounds. Quickly doing bad math, I come up with how much a pound the pig went for, and it’s at this point I decide I should probably go on a diet because I think overpaying for bacon isn’t a bad deal.

GET READY TO HAVE CONVERSATIONS
Between the chainsaw artist, the old steam-driven band saws and the old tractors near the sheep barn, you’re bound to run into an old logger or farmer. Word of advice: if you bump into said logger or farmer, be prepared to be there for a while. They will tell you all about how things used to be, how they logged or farmed some stretch of ground and before you know it, the fair will close on Sunday with you still in the fairgrounds.

Most of all, just have fun at the N.E. Washington Fair. It’s the last big hurrah before fall begins, and we all have to go back to school or retreat indoors because the temperatures get too chilly.