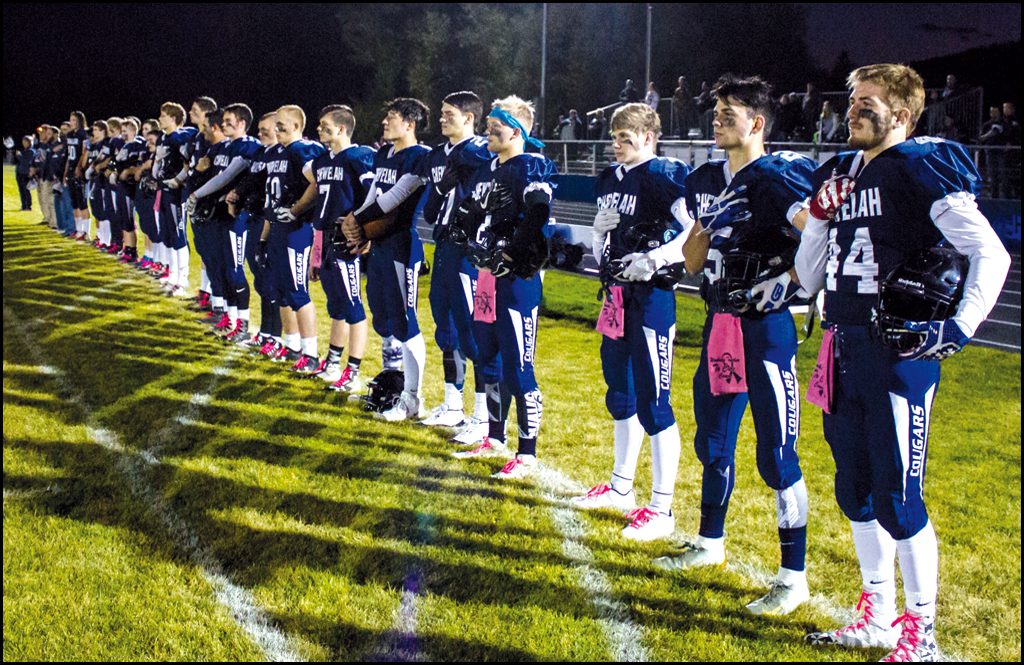 The Chewelah Cougar football team is entering 2019 ranked No. 4 in the state for 2B. (File photo)

TOUGH ROAD AHEAD: Chewelah has a tough schedule but a lot of returners to run the gauntlet in Geno’s pre-preview for the Cougars…

With summer baseball in the rearview mirror, it’s time for……..COUGAR FOOTBALL!!! Yes, I know, the first practice is on August 21, and the first game comes just two weeks later on September 6 when Omak visits Merle B. Snyder Field. However, with Little League and American Legion baseball coming to an end, I have nothing else to write about. In addition, MaxPreps came out with its preseason 2B football poll last week, so that has got to be a sure sign that football season is already upon us. And, I have moved my Hudl football to the top of my internet sports listings file on my computer. I’m ready!

MaxPreps has Chewelah ranked fourth in the state in its initial listing behind Kalama, Napavine and Adna. Reardan is the only other Northeast 2B League school in the top ten at number nine. Included in the top 25 are Asotin 11, Liberty 12, Northwest Christian 13, Colfax 18 and Lind-Ritzville 24.

So, expectations are already high here in Cougarville. As Coach Cameron Gump told the team, “It is almost that time fellas! Let’s go get a title!” They know the goal.

The Cougars lost eight seniors to graduation, six of whom were starters on one side of the ball or the other. Yet, as I look at this coming season’s 29-man roster, I see a veteran player in every position. They were not all starters, of course, but every one got in a lot of playing time. It appears that the Cougars will return six or seven starters on both offense and defense, which is a good number to build around, especially when the newcomers are all lettermen with plentiful varsity experience.

Coach Gump’s current roster includes six seniors, 11 juniors, four sophomores and eight freshmen. The total of 29 players exceeds last year’s listing of 26, with, hopefully, a few more joining the team when workouts begin next week. Dropping down to class-2B and having such a successful season last fall should draw a few more athletes to this year’s squad.

The junior class has the most players on the team, and they were not standing on the sideline as sophomores. These guys have a ton of on the field experience. Six or seven were starters on one side of the ball or the other. So, by comparing last year’s roster with this year’s roster, it was easy for MaxPreps to rank Chewelah at number four going into the season.

And, if MaxPreps can come up with a preseason poll, then I can predict the preseason starting lineups:

If the Cougars remain in their three-five defense, I am expecting that it will look like this: The secondary will all return with Nick Franks (jr.) at safety with Ryan Marang (jr.) and Jaron Baldwin (sr.) at the corners. Kaden Krouse (jr.) will go to middle linebacker. Bowen Middlesworth (jr.) and Jake Jeanneret (sr.) will return at inside linebackers. The new outside linebackers will be Nic Shierloh (sr.). and Nick Skok (jr.). The D-line will return Cole Davis (jr.) and Gunnar Hofstetter (jr.) and add Isaac Cook (jr.), along with Andrew Sweat (jr.), Sam Triplett (sr.) and Corban Stearns (so.) rotating in.

The Cougars will have a heavy schedule. Whoever put it together must have thought that Chewelah was still a 2A school, not a 2B team. It includes three tough 1A opponents within the first five games —defending state champion Colville, state runner-up Newport and Omak that went 9-1 last fall — all here at home. The other two games are at Liberty and Reardan from the southern division of the league. Yes, it is definitely a top-heavy schedule.

Chewelah will not face Wilbur and Springdale in northern division games as both schools have dropped down to play 1B 8-man football this year. So, the NE 2B North Division currently consists of opponents Kettle Falls, Davenport, and Northwest Christian. Those will be the only games that count until the league’s postseason crossover round.