FROM THE EDITOR: “We need to better manage our forests” is lip service 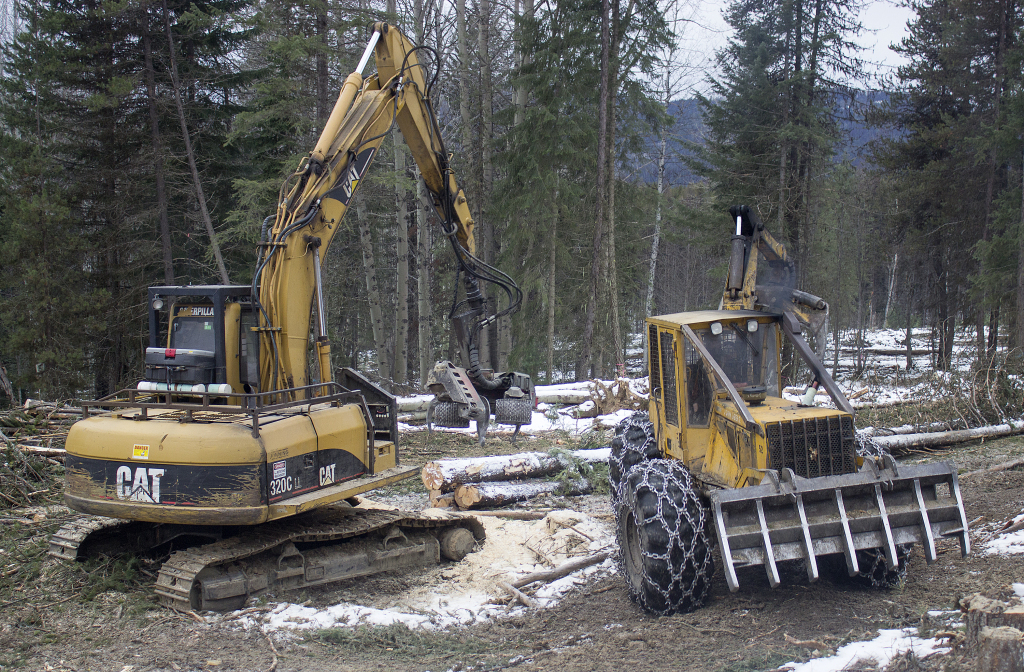 Tony Hansen, of Chewelah, brings in a drag in a 1992 John Deere 648E Skidder on the Hansen Logging jobsite near Arden, Wash. Running the 320C CAT with a LogMax processor is Anthony Jones.

As Chewelah resembled a scene from the latest end-of-the-world thriller movie from Hollywood last month, politicians in the state wasted no time touring communities that had been ravaged by wildfire to showcase their concern and push their solutions. One such solution now trotted out every fire season is better forest management.

The solution is simple: Clean out the underbrush, thin out forests so they aren’t so dense and wildfires would burn slower and not turn into the one-day firestorm that Labor Day was. I am completely on board with this and agree. The one sticking point is that beyond saying “better forest management,” the conversation never goes further than that.

Being somewhat close to the timber industry, I see a workforce that is getting smaller and older. The average age of a logger is 50. The common complaint is “the younger generation isn’t stepping up,” but once you have a few beers with a logger they’ll explain to you some industry deep issues.

Secondly, younger people aren’t getting into the industry because pay is better in other industries. Contracts and wages have stayed largely stagnant, and what was good money decades ago is now simply not enough. Talk to any logger and they’ll tell you they’re doing okay or getting by, but you just don’t get into logging to amass a fortune.
And low pay for… long hours, long travel times, markets that can change at anytime leaving you out of work for a month or two. A profession that can wreck your body and leave you limping at age 50.

So hypothetically, we could thin all the forests in Washington, but we would need more loggers and more logging companies. Nobody young wants to start a logging company because equipment is ridiculously expensive and it’s difficult to qualify for a loan to get the equipment if you’re starting out. You can go work for someone else, but as said before, you aren’t making Scrooge McDuck money running a processor. It’s becoming increasingly harder for people to get into the business. Many longtime logging operation owners are looking around to sell, but nobody is buying them because nobody wants to take on that financial liability, nor can they afford it.

Now, let’s say we log said forests, where do the logs go? We have a slow month or two in the market and the logs pile up at Vaagens like the Egyptians building the pyramid. You can’t sell “better managed forests” in foreign markets if they have all the wood they need.

The timber industry is related to market economics and there is an ebb and flow. If the demand goes down, all of a sudden nobody is making any money from cutting down the trees.

It’s also a bit like farming. It’s never warm enough, cold enough or the market is never good enough. I’ve never heard of the perfect situation for loggers, there’s always something during the year making things tougher than they should be.

At least Stevens County is blessed to have some mills around here to make logging economically viable. Some areas don’t have lumber mills for miles. In Western Montana, you’re more likely to see a Starbucks than a mill. Projects like the A-to-Z stuff they’re doing in the Colville National Forest are good, but we kind of need that a lot, everywhere.

For years the logging industry has been treated like the red-headed stepchild with slow wage growth, increased regulations, more and more asked of its loggers and a cutthroat attitude when it comes to contracts and how things operate. This has led to the slow decay of logging and many people are noping out of the industry because it’s a tough go, and you have to love it in your bones to keep doing it.

So Governor Inslee can say we need better managed forests. Our public lands director can say that. Political parties and other groups can point this out as well. But until our country is ready and willing to make logging an attractive business again, and have a market that makes sense, it won’t happen.

And since we can’t agree on the simplest things, I’m going to say that revitalizing an entire industry is probably out of the reach of a slow-moving, paralyzed government.