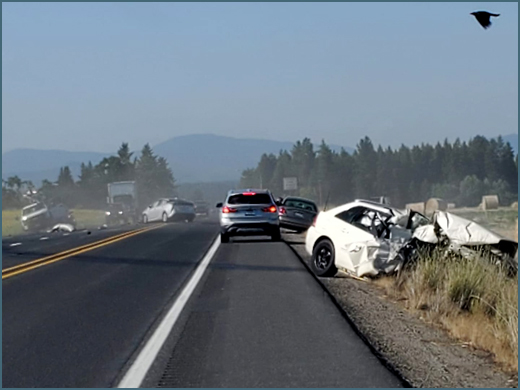 A major accident happened at West Half Moon Rd. and Highway 395 and several were taken to the hospital. (Courtesy photo)

One driver was arrested for vehicular assault and DUI after a four-car accident on Tuesday south of Deer Park that resulted in multiple injuries. According to the Washington State Patrol a witness saw the vehicle that began the chain of collisions swerving into other lanes on Highway 395. The Spokesman-Review is reporting that 25-year old Ryan Carpentier of Airway Heights was arrested after he rear-ended a Chevy suburban in his 2006 Chevy Malibu at roughly 5:06 p.m. on Tuesday near Half Moon Rd.

This began a chain reaction the resulted in two more vehicles being hit. Carpentier was transported to Providence Sacred Heart Medical Center by Life Flight an is in satisfactory condition. At the hospital, Carpentier would not acknowledge questions from Washington State Patrol and did not finish a field sobriety test, according to court reports and the Spokesman Review. He was arrested the evening of the accident.

According to WSP reports, at 5:06 p.m. on Tuesday near Half Moon Rd. south of Deer Park, a 2006 Chevy Malibu driven by 25-year old Ryan Carpentier of Airway Heights struck a 1993 Chevrolet Suburban from behind. The Malibu then crossed the centerline, striking a 2017 Toyota Prius.

A fourth vehicle, a 1993 GMC tractor-trailer driven by Spokane man Kyle McCrea, 24, ended up striking both the Malibu and the Prius after the initial collisions.

Carpentier, along with the driver of the Prius, 51-year old Dale Smith of Olympia, Smith’s passenger, 45-year old Curtis Vaughn of Olympia, and McCrea were transported to the hospital. Vaughn was discharged from the hospital on Wednesday.

The accident caused Highway 395 to be closed down for many hours on Tuesday in both directions. It is unknown if drugs and alcohol were involved in the accident.

The driver of the Suburban, 46-year old Jeromey Austin of Colbert was injured but not transported to the hospital.

EDITOR’S NOTE: The Independent got these details from the Washington State Patrol reports.