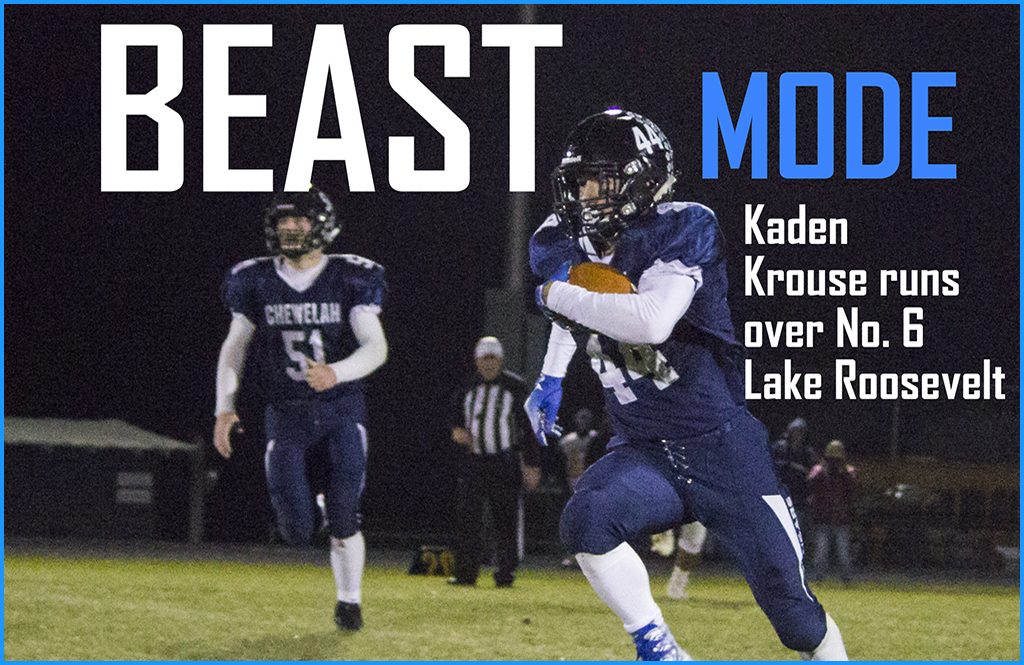 Defense comes up big for Cougars, who are good when they’re not playing an NFL schedule…

Nick Sheirloh might be getting a few more calls this week from people around Chewelah for help reaching the top shelf. With half the town in attendance for Homecoming 2019, the Cougar faithful watched the 6’4″ defensive lineman bat down a desperation pass from No. 6 Lake Roosevelt and clinch a 21-18 victory for the Chewelah football.

While their record is 2-4, two of Chewelah’s wins have come against state-ranked foes and three of their losses were again 1A playoff teams from last year. This win builds some momentum heading into league play at Kettle Falls next Friday. When asked why Chewelah had a knack for beating ranked teams in the state, Sheirloh had this to say.

The Cougars’ win showcased big passes from their QB, defensive stands when it was needed, punishing running plays and an offense that distributed the ball into many different hands. If the Cougars continue to improve as a team, this homecoming matchup – while meaningless in the standings – is a tantalizing glimpse at the potential of the team.

Lake Roosevelt came into Snyder Field having outscored opponents 150-29 and looked strong forcing Chewelah to punt first and driving down the field thanks to a 37-yard pass by Hunter Whitelaw and a 22-yard touchdown run by Cameron St. Pierre to make it 6-0 with 7:45 left in the first quarter.

The Cougars answered right back with the Kaden Krouse show, as the Chewelah fullback notched 25 and 12 yard runs, then capped things off with a seven-yard touchdown run. With a Sam Triplett extra-point, the score was 7-6 less than a minute after Roosevelt’s score.

(Here is the video of Krouse’s one-yard touchdown)

In the second quarter, St. Pierre notched a 12-yard touchdown run to put Lake Roosevelt ahead 12-6 with 8:36 left in the half. Chewelah would again answer back, set up by a 35-yard pass from Cougar QB Jake Jeanneret to Jaron Baldwin to put the ball on the goaline. Krouse would punch it in and another Triplett kick put the home team up 14-12 with 3:27 left in the half.

Lake Roosevelt was forced to punt on the next possession and Jeanneret again dialed up a big pass, launching a strike nearly all of the 65 yards of Bowen Middlesworth touchdown reception to put the Cougars up 21-12 with just over a minute left in the half. Another Triplett kick, would again give Chewelah points that would prove to be vital in the later stages of the game.

Middlesworth, who had missed several games because of a head injury, showed why he’s so important to both the offense and defense. The Northport kid was seemingly all over the field, making big tackles from his linebacker position while also being a scoring threat. 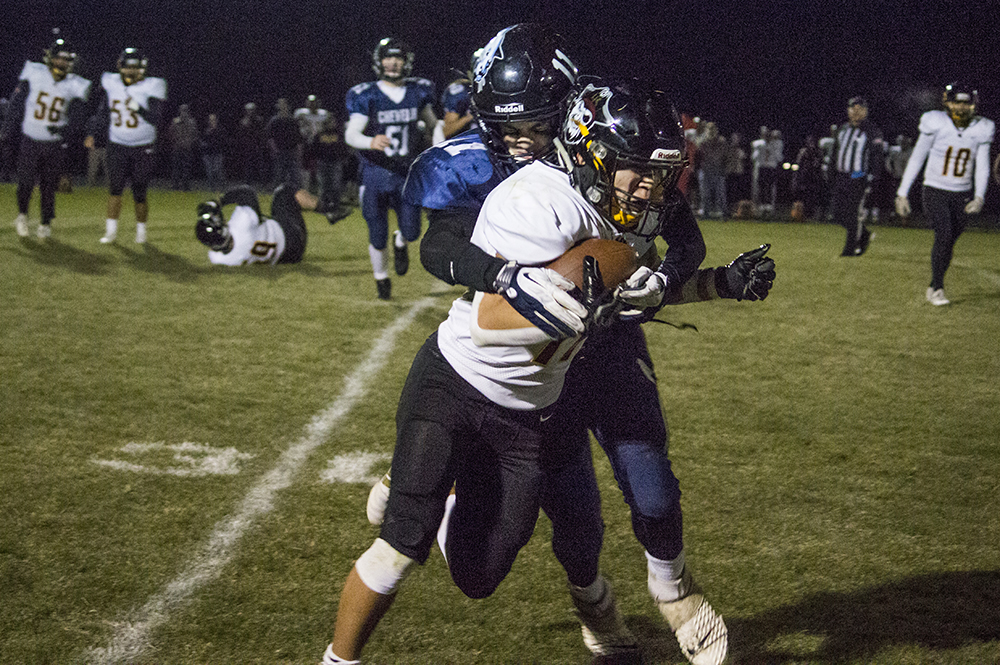 Bowen Middlesworth has made his presence felt after missing some games to start the season. In his last two starts, he’s scored two touchdowns and made punishing tackles like this one. (Brandon Hansen photo)

A Kruz Katzer interception towards the end of halftime would end any Lake Roosevelt drive and give the Cougars even more momentum heading into halftime. They would need it as they didn’t really have a halftime. Most of the players were part of the homecoming court and didn’t get to converse with coaches before the third quarter. Jeanneret, however, would be crowned homecoming king along with queen Elle Carpenter – probably for the long touchdown strike he threw in the first half.

The third quarter was essentially old school New York Giants football as the Cougars tried to chew up the clock. They did it unconventionally throwing the ball around with shortish passes. Time would tick away for Lake Roosevelt as their situation became more desperate.

The Raiders weren’t done though. Near the beginning of the fourth quarter, an interception of a Jeanneret pass by St. Pierre put them on the Chewelah 34-yard line. Five plays later, Whitelaw hit St. Pierre for a 16-yard touchdown pass to pull within 21-18 with 8:55 left in the game.

But for the third time, Lake Roosevelt failed to convert the extra point while Chewelah had hit all of its.

Chewelah would turn to Krouse who chewed up more clock with runs long and short, including a 22-yard run where he pushed the entire pile consisting of each 11-man on-field squad from each team. Lake Roosevelt, however, would get the ball back with roughly two minutes left and a big chance to win.

The Cougar defense stiffened up, however and a fourth down pass was swatted down with Dikembe Mutombo conviction by Shierloh to essentially ice the game.

According to unofficial, handwritten notes, Chewelah had 294 yards of total offense, including 164 yards passing by Jeanneret and 114 yards rushing by Kaden Krouse.

Jaron Baldwin finished with 54 yards on four catches while Bowen Middlesworth had 69 yards on two catches.

Lake Roosevelt was held to 237 yards on offense and well before their season scoring average.

Chewelah will play at Kettle Falls next Friday at 7 p.m. 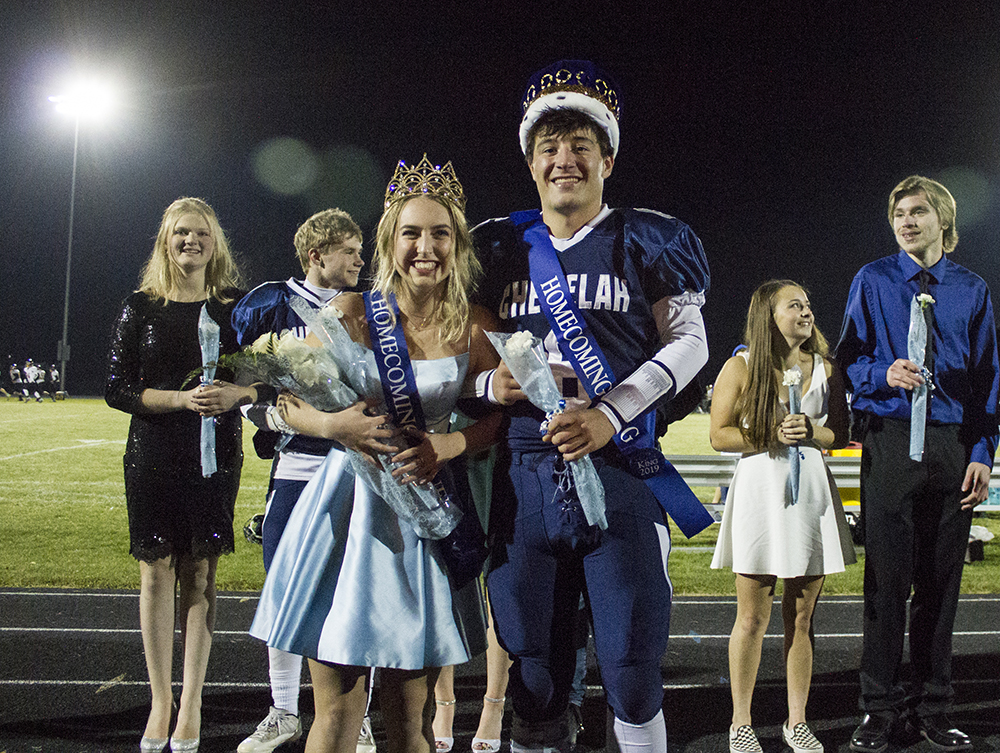