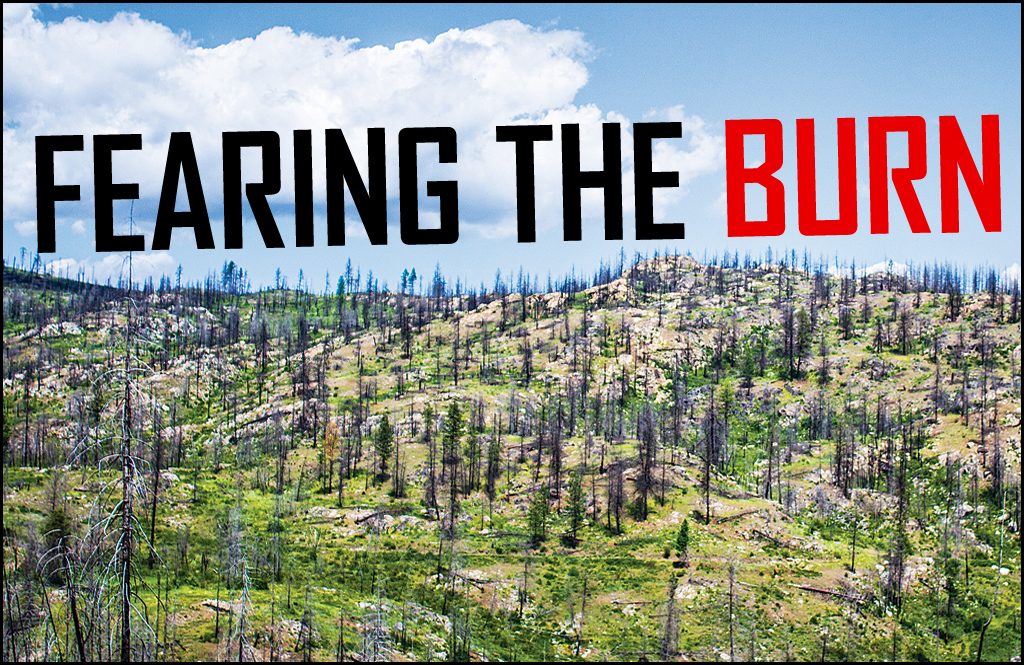 The burn scar of 2015’s Marble Valley Fire near Addy sits as a reminder of what summer can bring in Eastern Washington. (Brandon Hansen photo)

With a dry spring, it’s looking like this year’s fire season could be a hot one. In the state of Washington, even the wet, western part of the state is experiencing fire danger, and the east side is settling into what sometimes seems like a siege for timber-laden communities.

“Wildland season is shaping up to be pretty brutal,” Stevens County Fire District No. 1 Chief Mike Bucy said. “The west side of the state is very dry, and NE Washington is drying out quickly. This can keep resources scarce if both sides of the state are in an elevated fire danger.”

At the beginning of June, most of Stevens County is classified as being abnormally dry. While there has been some much-needed rain storms last week, and rain is in the forecast this Friday, conditions have been signaling a warm and dry summer.

“Fire District 1 no longer pays attention to the ‘snowpack’,’” Bucy said. “Most of what we watch for now are the weather patterns of May and June. Those two months can dictate the rest of the summer months, based on how warm and dry things get.”

Bucy recalled the summer of 2015 when large fires swept through Stevens County. May had tempretures in the 80s while June turned into the 90s and 100s.

“That set the tone for the rest of the summer,” Bucy said.

Fire District 4, which covers Chewelah and Valley’s surrounding areas said they have been called to several wildfires so far which is unusual. Usually it’s not until the middle of June or July until fire districts start seeing those types of calls.

“The years we had Valley mill, Wights Mountain, and Skok Loop fires were all extremely dry years, so we expect more of the same this season,” Fire District 4’s Tim VanDoren said. “ If everyone knows it is going to be an extremely dry season and uses extreme caution, it will help to keep our losses to a minimum.”

Fire District 1, which covers Stevens County’s southern flank, is seeing surface fuels that are dry and can spread fire quickly.

“We have yet to see a deeper-seated fire, one that gets into the timber and heavy brush,” Bucy said. “The rest of the state has been pretty busy, though. Traditionally the NE trends to have our first major fires in late June.”

But like anything involving weather patterns, fire season is a difficult thing to predict. NE Washington is on the border of “normal” precipitation, but the long-term forecast is calling for warmer than normal conditions.

Freezing, or a lack of freezing, during the key spring months means water goes into the ground and does not cause a runoff of water. Flooding was at a minimum this spring, but it also means grass fuels aren’t as high as if it was a wet spring.

One change that firefighters can expect is longer wildland fire seasons. Firefighters now see calls as early as February. Sometimes fires burn until snow falls in the area. This means our front-line fire responders are pushing it for months.

“Most districts start looking at changes after the previous wildland season ends,” Bucy said. “What can we do better or different? What worked, what didn’t?”

The Washington DNR has been asking for more money to combat fires as well. It has cost the state an average of $153 million a year to combat fires in the past five years.

It’s becoming a fact of life in Washington that every summer brings wildfires. The DNR estimates that 2.2 million homes in the state are in threatened areas.

For the local Stevens County residents who saw the Marble Valley Fire in 2015 creep behind his house and burn productive timberland he intended to log, it’s a disheartening prospect for landowners. It’s a balancing act to log while market prices are good, or wait and hope a wildfire doesn’t wipe out valuable timberland.

“This used to be like a jungle in here,” Falstad said while looking over the burn scare of the Marble Valley Fire.

For years now, state and county officials have been urging residents to be more vigilant about fuels near their houses in timberland. Mulches, composting, a heavy concentration of trees, wood decking, and other combustible materials should be removed from around the house. Dead leaves in rain gutters should be removed as well as dead branches and plants near a house. A defensible space of limited fuel around the house is recommended to make your resident resistant to wildfire.

The thin red line begins with local fire districts. In 2015, resources didn’t come fast enough and fires got out of control. Last year even with new firefighting techniques where the DNR deployed resources, including airplanes, much faster to strangle a wildfire in its crib, there was still a massive blaze near Kettle Falls that threatened many homes and destroyed some residences.

Fire Districts will relook at their procedures for this season and make upgrades to equipment this summer. Fire District 1 has added an additional brush rig and is starting to train new people and put current members through refresher training.

“We also prep them to start drinking more water—hydration is important to keeping our firefighters healthy,” Bucy said. “Drinking a lot of water on the day of a red flag warning is not the time to start hydrating.”

Fire District 1 starts reconning the area and when they respond to other incidents which can range from medical emergencies, car accidents and more, they take notes of conditions.

“This can help us ‘pre-plan’ a little as to where fire conditions are more volatile than other areas,” Bucy said We also work in trying to make wholesale changes state-wide to better enhance wildland coverage and responses. This is a very long-term and tedious process.”

One thing that has been omnipresence lately during the summer has been wildfire smoke. With the jet stream coming out of Canada this year, citizens should expect smoke to come with it as wildfires are currently burning up north.

And if you see smoke that isn’t just haze, report it.

“If you see smoke when things start getting really dry, don’t hesitate to call it in. We would rather go check it out, than to wait until it is too large to control,” Van Doren said. “Let’s have a safe and uneventful fire season.”

Since the majority of wildfires are started by humans, fire districts also urge people to use extreme caution. Many fire calls already responded to this year were from people burning things that got away from them.

“It is vital that everyone use extreme caution while burning. Check what the weather forecast for the day will be because many afternoons we pick up high winds,” Van Doren said. “You want to have your fire out completely before this happens. The wind can take small embers and start light, flashy fuels, or can reignite a fire that you assumed was completely out, so watch the area you have been burning.”

With burn scars up and down the Colville Valley now, fire season has become an all-to-real reality that doesn’t have an occasional appearance. Every year, fire danger is high, and residents need to be prepared.

FIRE THREATENS HOMES IN GRANT COUNTY
A wildfire grew from 300 to 3,500 acres overnight between State Route 26 and State Route 243 in Grant County on Monday. The fire is threatening homes and Level 3 evacuations have been issued. The fire is a mix of grass and sage. Three strike teams and air resources are being called in. As of Tuesday it was at 5,000 acres.