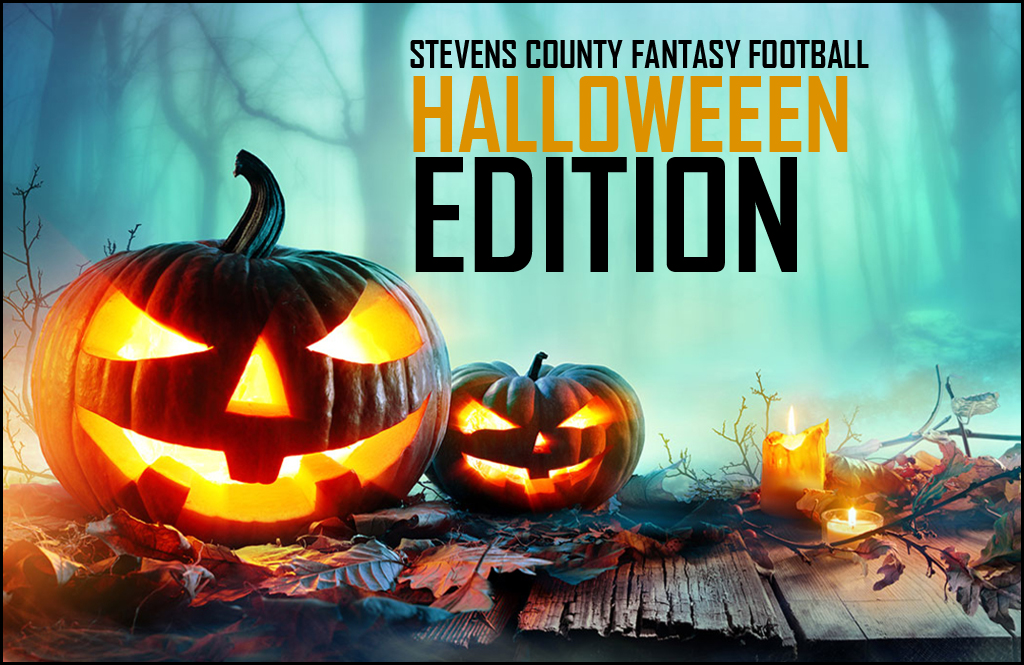 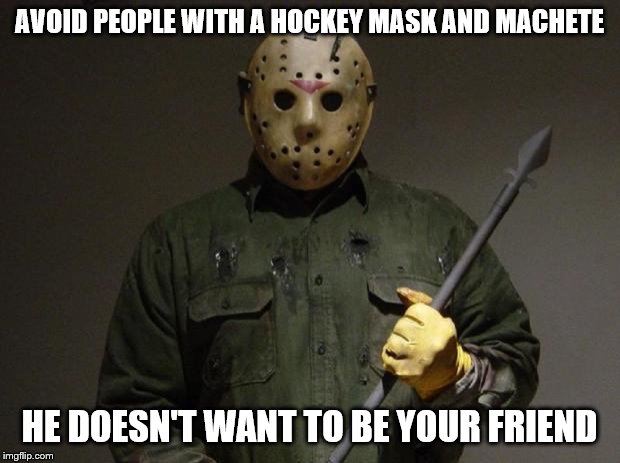 It’s Halloween! Annnnnd… it just so happens to be the day we do our Stevens County Fantasy Football Column. With the postseason looming, Friday’s round of games are the most important of the year. Chewelah will be playing for the NE 2B North title, welcoming in the Davenport Gorillas in the most important game being played in Eastern Washington. Selkirk will be traveling to Cusick to take on the Panthers in a battle for the NE 1B crown. Wellpinit will be playing Springdale in hopes of putting themselves in a better position for the league standings. Anything could happen! It’s pure mayhem! Enjoy it before it starts snowing and going to high school football games is pure ice pick torture!

There are some truely horrifying things in high school football and November tempretures in the second half of games are one of them. Call it the “weeks of not feeling your fingers or toes.”

Other truly scary things that happen in high school football…

1. The scoreclock doesn’t work, meaning nobody knows what time it is and what the score is. It’s pure torture.
2. Mud. Remember Colville’s field three years ago when Chewelah played them? It was so muddy you would stand on the sideline and keep moving because the mud/turf would keep moving from your momentum. I am not joking.
3. Parents calling pass interference every play.
4. Any football game that has 90 percent hybrid SUV/hatchbacks. Suburban parents will end up fighting in the stands.
5. “The game isn’t at the high school but some random field a long ways from there.”
6. A Cole Davis or Jake George sack of the quarterback. I feel like I’m watching the end of someone’s career right there.
7. Canadian football rules.
8. 40 percent chance of rain when you forgot your rain gear.

Now lets move onto our champion this week… 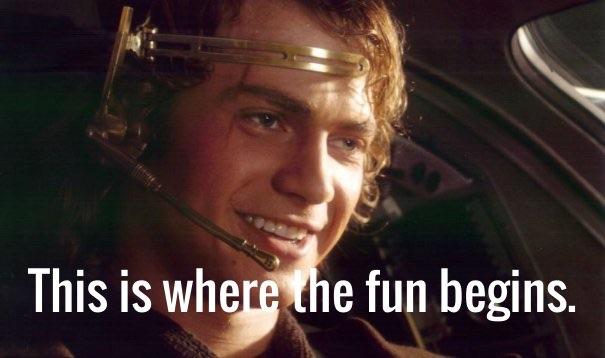 Okay, so it’s not Anakin Skywalker, but it might as well be. Selkirk QB Jay Link started out as a fun addition to our Stevens County Fantasy Football roundup with the high-flying Ranger consistently putting up big numbers. But now we’re getting very worried he might be a little TOO strong in the Force. He told me he likes playing as the Pittsburgh Steelers on Madden. WHO DOES THAT? This week he won the Stevens County Fantasy Football Championship for the third time and he played in just the first half against Northport.

Link threw for 285 yards, five touchdowns, rushed for 39 yards and scored three two-point conversions for a total of 40 fantasy points. He is always above 40 points in the fantasy scoring week in and week out and a lot of his teammates are in the 20 to 30-point range. This is how I feel every time I look at a Selkirk box score…

Anyways, here are some warning signs of Link becoming a Sith Lord from Star Wars just in case we’re worried…

1. Hates sand
2. Hates Jar-Jar Binks
3. Hates Mace Windu pointing a light saber at his face
4. Tends to not like rules set out from the Jedi Council.
5. Enjoys the color black for clothing.
6. Chokes people who screw up screen passes.
7. Has a lightsaber. Not sure anyone can afford a lightsaber in NE Washington.

TOP OTHER PASSER OF THE WEEK: Chewelah QB Jake Jeanneret 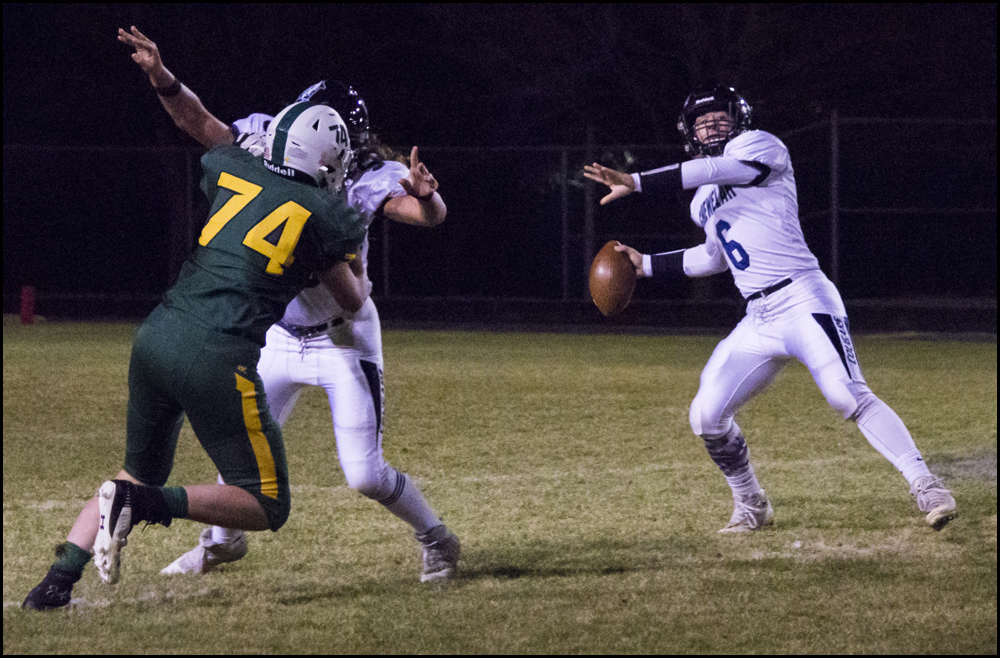 Link’s cousin Jake Jeanneret is second on the list with an eye-popping five-touchdown performance against Northwest Christian last Friday. Jeanneret rushed for 26 yards, passed for 241 yards, five scores and the longest two-point conversion run in Chewelah history. He finished with 34 news and made KXLY’s Friday Football special for laughing like the Joker after the longest two-point conversion play I’ve ever seen.

With Link and Jeanneret putting up numbers like this, who knows what that Jeanneret Thanksgiving Day backyard football game is going to be like. I hear Dan and Luke have strong arms as well.

This makes me really want to push for an AND 1 between Selkirk and Chewelah after the postseason. Cousin vs. Cousin! Stevens County vs. Pend Oreille County! 8-man vs. 11-man! It could be a bowl game or something and we could get Lions and Kiwanis burgers afterwards. I feel like this needs to happen because we’d have more pickup trucks in the parking lot than Wendle Ford at the Y.

Also having big games for the Chewelah Cougars – Bowen Middlesworth scored 22 fantasy points after running for 32 yards, gathering 65 reception yards and scoring two touchdowns. Is there a more exciting player than Bowen right now. Every scoring play he has goes for like 60 yards or is some ridiculous catch. Chewelah needs to gift Northport High School something for getting such a talented athlete on the roster.

Kaden Krouse had 15 fantasy points after the most ridiculous screen pass play ever against NWC for a touchdown, 82 reception yards and 11 rushing yards. If you were at the game, you know the play. He made 15 guys miss on his way to the endzone. Now I know there are only 11 guys on defense but I think he freaked out the chain gang, caused a few photographers to dive out of the way and stiffed up the ticket taker on the way to the endzone.

Michaeliszyn continues to help his team push towards the postseason. Against Medical Lake Michaeliszyn had 157 yards rushing and two rushing touchdowns for 27 fantasy points, while fellow Colville running back Tyler Baun had 22 fantasy points with 46 rushing yards and three touchdowns. I feel like the Indians have a very good shot of taking second in the NEA League standings, but there is also a chance there would be a Kansas City tiebreaker situation.

In which case, every sports writer in Eastern Washington would go “ooOOOohhh?” and drive to the tiebreaker to watch someone fumble the ball after just getting off the bus 10 minutes prior.

Is there anything better than a Kansas City tiebreaker for fans, but terrible for players? One mistake can end your season. Its like we just decided to skip things like quarters and went straight to overtime rules, while making everybody bus kids 20 minutes to a neutral field. It’s brilliant!!

For a game that wasn’t even scheduled a week ago, Avery Kitt put in a very nice performance for Springdale. With their game against Hunters cancelled because the Lions didn’t have enough players, the Chargers grabbed an extra game with Inchelium on a Tuesday. Kitt, a senior, scored three touchdowns, one rushing and two interception returns for a score to go along with 42 rushing yards for 22 fantasy points.