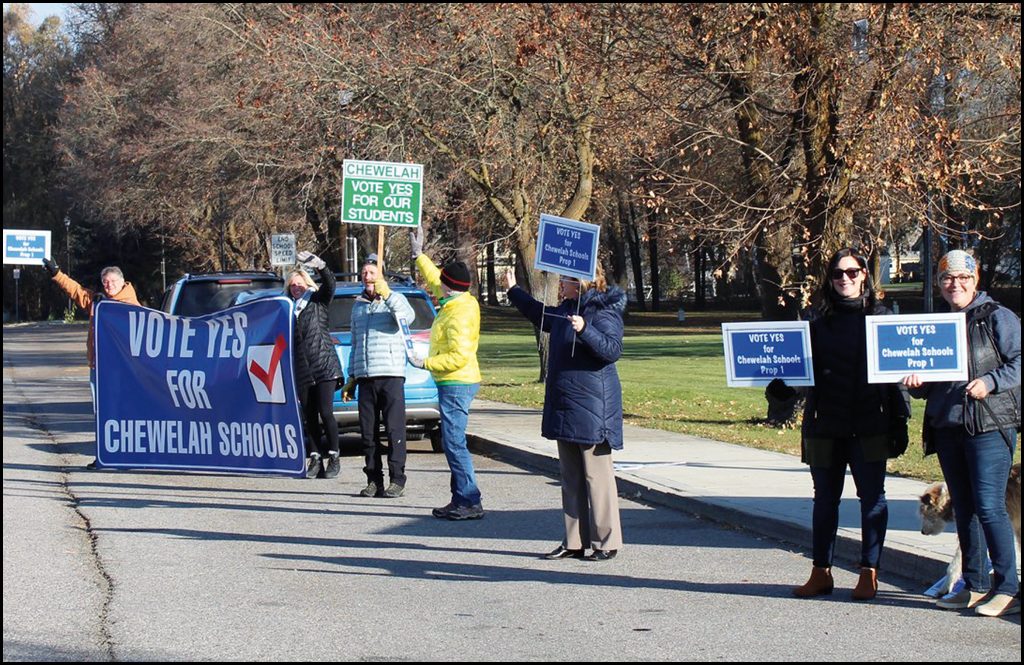 Supporters of Proposition 1, which will improve communication and safety in Chewelah Schools, demonstrate on Saturday. (Ruthanna Frizzell photo)

SAFETY ON THE MIND: Chewelah votes for levy that upgrades school building phones and intercoms while also helping improve technology and safety issues within aging structures…

Chewelah had approved a levy for a new track in 2016 after a couple decades of failed efforts to improve its Snyder Field Facilities. On Wednesday, people woke up to the news that Chewelah voters had approved another levy measure that would continue the same tax levels of the 2016 levy but be put towards improving intercoms, phones, technology and safety in the aging school buildings in the district.

The capital levy will raise $778,508 for the district to improve technology and safety in all school district buildings. This levy will continue the .70 cent tax per $1,000 assessed value on properties in the school district. It will also maintain the tax levels with the current levies and not raise them.

Telephone, intercom and emergency alarm systems are to be updated and modernized. Currently the telephone systems are so old at both schools, the district’s technology staff has to purchase spare parts off of eBay as they are no longer commercially produced. The school district is still using analog phones as opposed to digital phones.

The levy will also be used to upgrade safety and security systems. The levy could also be used to acquire instructional technology equipment and infrastructure such as computers, hardware and software.

SCHOOL BOARD
While Kyra Rolstad was essentially running unopposed as Sean Peterson was telling community members to vote for her, she won with 63 percent of the vote (491 votes) to his 270 votes (35 percent). Unopposed candidates Dan Krouse and Bryan Tidwell were voted in and TO Bakken earned 52 percent of the vote over Warren Stewart. This means four new members on the Chewelah School Board.

The following unofficial results are in from the 2019 General Election: