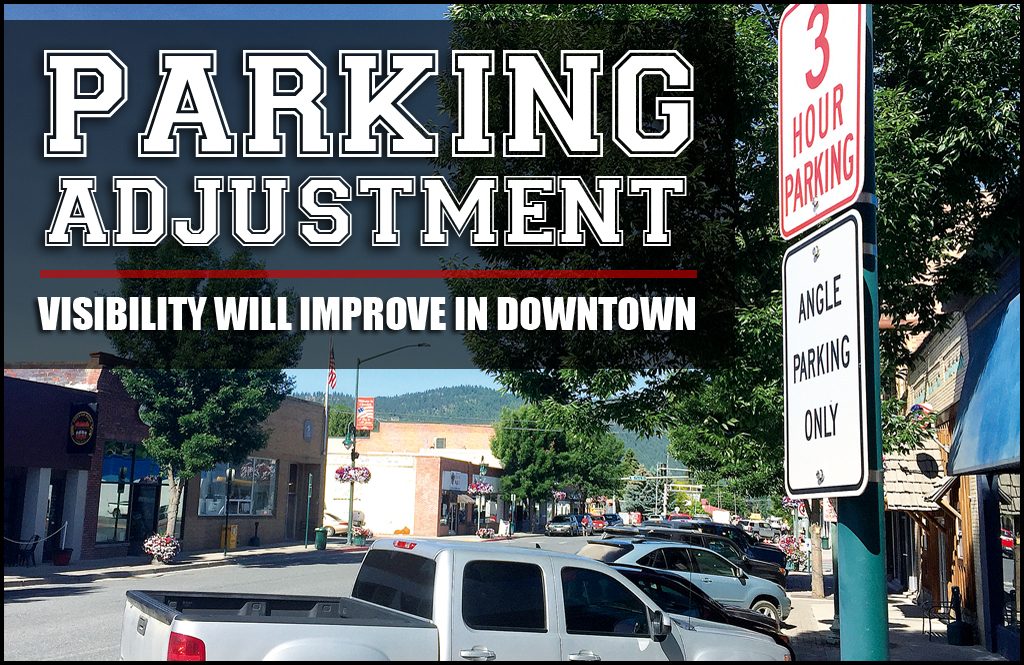 REDUCTION IN SPOTS: Council changes parking orientation to make it safer to see backing out…

After months of discussion, the council approved a new striping plan for East Main Avenue which they hope will improve safety along the busy retail corridor. Ultimately, those safety considerations trumped the desire of some on the council and in the community who wanted to see more parking spaces downtown.

Generally, the look and feel of parking on East Main between Highway 395 and 5th St. East will be mostly the same except the angle parking on the North side of the street will change from 45-degrees to 35-degrees, which will allow for a wider driving lane on that side.

Earlier options presented by Councilwoman Nicole Norvell would have increased the total number of parking stalls by converting the parallel parking on the south side of the street to angle parking. But the council opted to keep the parallel parking on the south side and decrease the parking angle on the north side which will result in a loss of four parking spaces in the area.

Both Councilwoman Carra Nupp and Councilman Evan Schalock questioned the shift from a design that would increase available parking spaces to a plan that actually decreases those spaces.

“I thought the purpose was to gain spaces?” Nupp asked Norvell.

“One of the purposes [of studying the parking] was to gain extra parking downtown,” Norvell said. “That was something that just couldn’t be done. One of the other purposes was to try to create a wider lane width on the north side of the road to make it a safer place. If we [decrease the] angle of that parking we’re going to have a wider lane width, we’re going to have more room for larger trucks. Because I couldn’t cram any more spaces in, like I thought I could at first, I went with the safety concern as my number one goal.”
Schalock also indicated that he felt the council was missing the point of the project.

“I have a feeling there’s going to be some backlash, given that we went into this and publicly everyone thought we were going to increase the parking, and now it’s decreased,” Schalock said.
Norvell and Schalock discussed the idea raised at a previous public meeting which would convert side streets such as 2nd, 3rd and 4th to one-way traffic with angle parking. The council believes that that idea would increase the number of parking spaces downtown, but they are not ready to start the planning for that at this time.

Additionally, the striping plan calls for a 18-inch solid yellow centerline which will make it clear that mid-block left turns, including U-turns and J-turns, are not allowed.
The council approved the new striping and parking plan by a vote of 6-1. Nupp voted against it.

Council revises building fees – again
The Council voted to lower the city’s building permit fees again after a new fee system was just adopted in December. This month’s change came after a $130,000 home remodel project revealed that the permit fees under the new rate structure would have cost the homeowner nearly four times more than the fees in place before last December.

In December, Chewelah adopted fees identical to the Stevens County Building Department in order to have consistency between the two agencies and generate new revenue for the city to afford a new part-time building inspector.

“We are going to have it in the budget to hire a part-time building inspector for the City of Chewelah and our current fees are so far below what will be needed to fund this position that we are going to have to get more in-line with the county,” councilman Payton Norvell explained in December when the fees were adopted.

Norvell did not indicate how, or if, the new lower fees would fund the new building inspector position.

Prior to December, building permit fees on the same $130,000 remodel project would have cost about $995. After December, those costs jumped to approximately $4000. Now, residential remodel work will be charged 3.3 percent of the project’s value, with a maximum of $660.

For comparison, that permit in Colville would cost $988; Deer Park is $1106; and Spokane is $1104. Stevens County Land Services Director Erik Johansen did not return numerous phone calls for comment on their fees.

The International Code Council provides guidance to municipalities in setting local permit fees. The ICC recommends setting the fee multiplier by dividing the whole year’s building department expenses by the total annual building value. They do not recommend copying the permit fees of another municipality.

The TIP is a short-range plan required by Washington State Department of Transportation that is updated annually and shows the sources and amount of funding for transportation projects planned for the next six years.

In relation to the TIP, Councilwoman Carra Nupp questioned City Administrator Mike Frizzell about a ramp that was built on top of the sidewalk on North 2nd St. West at the new Butcher Block Apartments.

“Apparently, there’s been a ramp built on top of our city sidewalk?” Nupp inquired.

Frizzell said that the owners will be constructing a new sidewalk around their ramp but did not elaborate on how the ramp construction was permitted or when the violation would be corrected.

“There’s enough room there between the curb and [ramp] that they’re going to pour a sidewalk that goes around that ramp,” Frizzell explained. “So, it’s not there yet, but it will be.”

Airport planning funds approved
The Council unanimously approved a $16,700 expenditure for matching funds in a planning grant application for the Chewelah Municipal Airport.

The $50,000 grant from Community Economic Revitalization Board (CERB), if approved, will be used by the city to hire T-O Engineers to complete a economic and engineering feasibility study for the airport property.

After acquiring the airport property last year from the Department of Natural Resources, the city has proposed to develop approximately 50 acres of adjacent property for both commercial and residential use.

Council hears electric customer complaint
Barbara Mowrey, a 26-year resident of Chewelah and former city councilwoman, lodged a complaint with the council over a $25 late penalty charge on her 49 cent electric bill. She claimed that “inattentiveness” of the billing clerk led to the problem.

Mowrey said that she paid her May bill at the city hall counter but was short by $5.49. Five dollars is allowed by code to be carried over to the next month without penalty and she said another woman in line offered to pay the 49 cents for her so that Mowrey could avoid the late charge. When Mowrey left the counter, she believed that her bill was covered for the month and a late charge would not be imposed. But, she was surprised when she received the late charge and disconnect notice in the mail. When she returned to city hall to inquire about the discrepancy, she was informed by the clerk that the 49 cents had not been paid by the other customer and that the late charge could not be reversed.

“I am asking the City of Chewelah to take into account that a mistake can and did happen,” Mowrey said. “[I] request that when a discrepancy like this does occur that the city change its bylaws to allow a citizen to be compensated by allowing reversal of the $25 late fee.”

The council did not take action on her request, but Mayor Dorothy Knauss did ask Mowrey to bring the matter to her office.

“This is clearly an administrative matter, so I suggest that you either deal with the city administrator or myself. I was not even aware of this,” Knauss offered.

The next regular council meetings are scheduled for Wednesday, June 19 and Wednesday, July 3 starting at 6:30 p.m. at Chewelah City Hall.