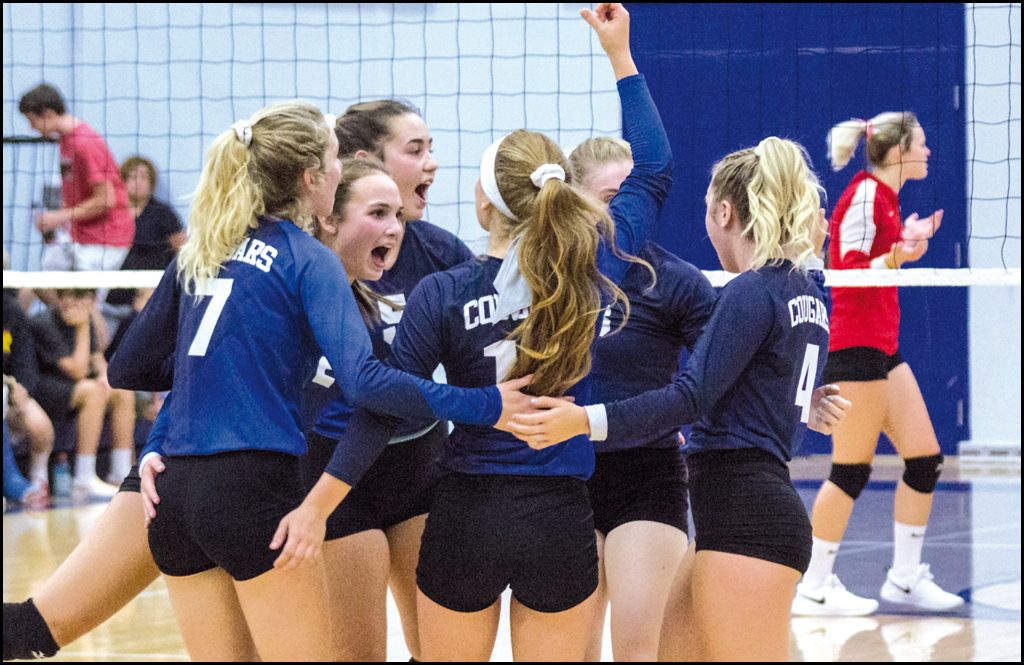 AGGRESSIVE OUT OF THE GATE: Lady Cougars have stints where they look downright scary in early season volleyball action against Colville, Davenport…

Alyssa Fitzgerald hammered 10 kills and Lily Kirry added seven as the Chewelah Cougars opened their league season last Thursday evening by defeating Northern Division rival Davenport in straight sets. The Lady Cougars made it look like it was going to be a short night in the gym by dominating the first set 25-8. However, the visiting Lady Gorillas were not eager to get back on the bus and made the Chewelah girls work harder to win the next two sets by much closer 25-20 scores.

The Cougars were a well-oiled machine when they settled into their offensive groove, but there were times in the last two sets when they entered the Twilight Zone where they were unable to sustain their rhythm. These unproductive interludes gave Davenport the opportunity to build a 15-8 lead in set two before the Cougars again found their tempo and came back for the 25-20 win.

The third set was similar to the first in that Chewelah held the lead from the first serve to the last point awarded, but the Cougars struggled to slam the door when their 24-13 lead was shrunk to 25-20 in the final minutes of the match. 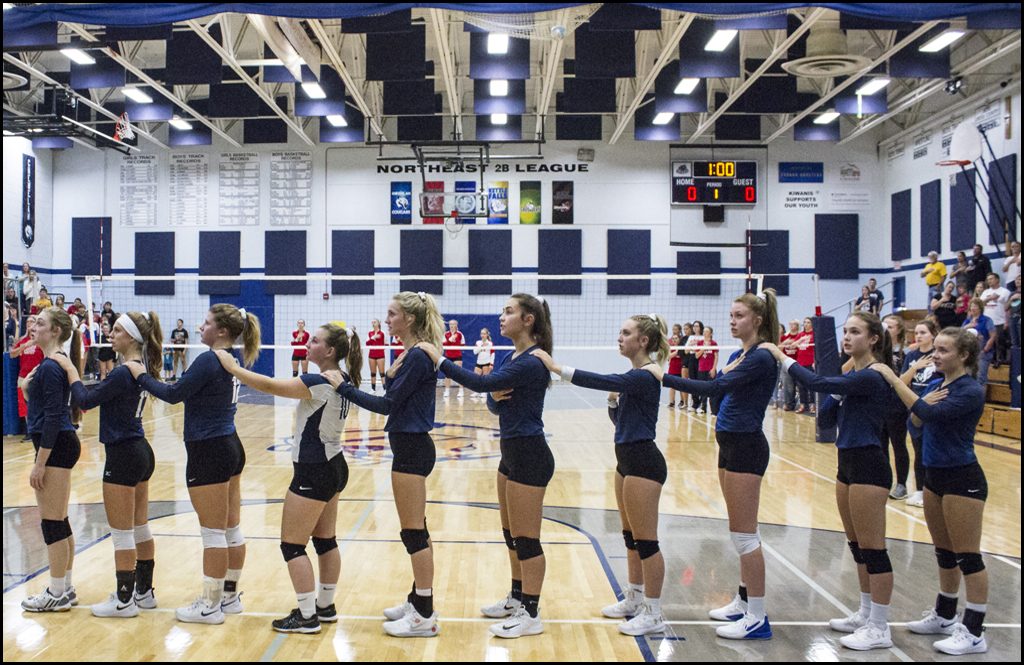 The goal for the Lady Cougars in their upcoming matches will be to spend more time in the groove. This means getting that first pass to the setter so she can feed the front row hitters. Altogether, they clobbered 33 kills spread over seven players in only three sets, with Elle Carpenter dishing out 20 assists. Veteran outside hitter Haven Rainer finished with five kills, and Carpenter had a pair. Sophomores Maili Masuda, Natalie George and Mia Bellevue combined for nine kills, demonstrating that the Cougars have young talent coming off the bench.

“In the Davenport match you could see a glimpse of what we are capable of in that first set,” Chewelah Head Coach Kaya Landers said. “We are still in the process of learning lots of new things and changing some habits, so at times it looks like two different teams as we are implementing new systems and still sometimes reverting back to old tendencies.”

Jesse Macrae and Masuda each served a pair of aces. Fitzgerald, Carpenter, Rainer and Taya Tapia each had one.

Defensively, Chewelah totaled 36 digs, topped by Lily Kirry with 10, along with seven apiece from Fitzgerald and Carpenter. Fitzgerald had the only two blocks on the Cougar side of the net. The Cougars limited Davenport to only nine offensive points through the match.

Chewelah scored the first eight points of the opening set behind kills from Fitzgerald and George. The Cougar lead grew to 17-3 through the middle of the set with Davenport errors posting points on the home side of the scoreboard. Chewelah’s offense got back into the swing of things with kills from Kirry, Rainer, and Fitzgerald bringing an end to the set at 25-8.

A more determined Davenport team returned to the court for the second set, somewhat catching Chewelah off guard. The Gorillas took an early 3-0 lead and refused to relinquish it. The Cougars answered with kills from Fitzgerald, Rainer, Kirry and Masuda to close the gap to 7-6, but a series of errant passes, serves and hits on the Cougar end of the court allowed Davenport to expand its lead to 15-8.

Then, Chewelah shifted out of neutral and into second gear. Three consecutive kills from Fitzgerald and an ace serve by Macrae highlighted the comeback, knotting the score at 16-16. The score was tied four more times until it got to 20-20 with kills by Kirry, Carpenter and Masuda matching the Gorillas point for point. The Cougars scored the last five points of the set behind kills from Rainer and Fitzgerald to claim the 25-20 come from behind victory.

Chewelah led the third set from start to finish and held a 24-13 lead, but the Cougars again fell into a funk that took seven more serves to score the winning point for the 25-20 win. Ace serves by Rainer, Fitzgerald, Carpenter, and Masuda were instrumental in this win, along with a rare crosscourt kill by Bellevue.

It was the first Chewelah win under new coach Kaya Landers, who is surprisingly not as animated during matches as she is in practice. The Cougars are 1-1 after losing a four-set match at Colville the previous Tuesday.

Fur and feathers flew last Tuesday night when the Chewelah Cougars and Colville Indians faced each other through the net to decide the winner of the annual volleyball game between the two traditional Steven County archrivals. As expected, every set was hard-fought to the end and all scores were close. The Lady Cougars won the first set 25-23, but the homestanding Lady Indians fought back to win the next three sets by scores of 25-20, 25-23, and 25-22.

“We played pretty rocky against Colville and still managed a very close match,” Landers said. “We lost that match due to our own errors, but I’m glad to have started the season with a good opponent like Colville to help set the tone with a little quicker pace.”

The Lady Cougars played at Springdale on Tuesday. They return home to Pein-Lynch Gym on Thursday, Sept. 19 to host a league encounter against nemesis Northwest Christian, and then Deer Park comes to Jenkins High School on Monday, Sept. 23. The Cougars crushed the Crusaders in four sets at last year’s home match and plan to do so again this Thursday. So, Cougar fans, it’s time to “Fill the Gym” again for this crucial match.

“I am asking a lot of these young ladies and they are working really hard to execute all of it,” Landers said. “We have a great team culture and chemistry right now, practice is really productive and I think we get better at each outing. We had two great sets against an excellent Northwest Christian team over the weekend so we are really excited to get to play them again at home on Thursday.”

‹ After years of service, St. Joseph’s Long Term Care Unit now officially closed › BEEHIVE: The 1960s are back in Chewelah