STRONG WORDS: Commissioners sign resolution criticizing I-1639, calling it an affront and insult to law abiding citizens and patriots…

The Stevens County Commissioners recently signed a resolution brought to them by community member Austin King, saying that Initiative 1-1639 cannot be reconciled with constitutional rights, cannot withstand judicial scrutiny and is an insult and affront to the law abiding citizens and patriots of Stevens County.

The resolution, voted in favor by the commissioners 3-0, directly criticizes the gun control initiative that raised the age to own a semi-automatic rifle to 21, required more background checks and opens gun owners to possible litigation if guns aren’t “properly stored” and are used in a crime by someone else.

The resolution cited Supreme Court cases and, according to King, has more teeth than a previous resolution criticizing gun control laws.

“The main message we are sending is to our citizens, the folks in Olympia and others that push these issues forward that the second amendment to the Constitution is an absolute right and it SHALL NOT be infringed,” Commissioner Wes McCart wrote in an email to The Independent. “We believe that I-1639 does infringe on your God given right to defend yourself and your family and property.”

Initiative I-1639, while passing with 60-percent of the statewide vote, was only approved in 11 counties, and voted down in 25 counties. It was criticized by several sheriffs around the state and Loren Culp, the police chief of Republic, earned national attention for refusing to enforce the law, suggesting Republic become a sanctuary city for gun rights. He has since announced his candidacy for governor.

King said that the initiative infuriates him and is an attack on constitutional rights.

“I, as well as so many others are tired ,tired of officials that think it is okay to violate the citizen rights for their own agendas,” King said. “What is it that they are planning? Disarm the people one bill at a time. A defenseless population is one that is easy to control when the government are the only ones with guns.”

Several gun-control bills are on the slate this legislative session as well. King criticized these bills saying that things like red flag laws are attacking 1st, 2nd, 4th and 14th amendment rights.

McCart told The Independent that the commissioners are very concerned about the gun laws being proposed, including the possible ban on large capacity magazines and certain types of fire arms.

“Law abiding citizens should not have to be punished because criminals commit crimes, they will simply get what they want anyway,” McCart said.

McCart also said that the initiative should be repealed and that commissioners believe the law will not hold up to a constitutional challenge.

“There is hope that it will work its way out of existence quickly by repeal or being overruled in court,” McCart said. “I believe we can be further ahead by just teaching more folks about responsible gun ownership and how to safely use their guns for protection and sport.”

King said that the attacks on the second amendment need to stop and said that the government cannot continue to take away people’s rights without consequence.

“The people need to stand together, follow due process, to keep our constitutional rights in place, when all else fails, it is the responsibility of every citizen to stand up and let the government know that we will not lie down anymore, that they will not hinder our rights, that we will no longer be sheep in the night.”

The full text of the resolution can be seen here 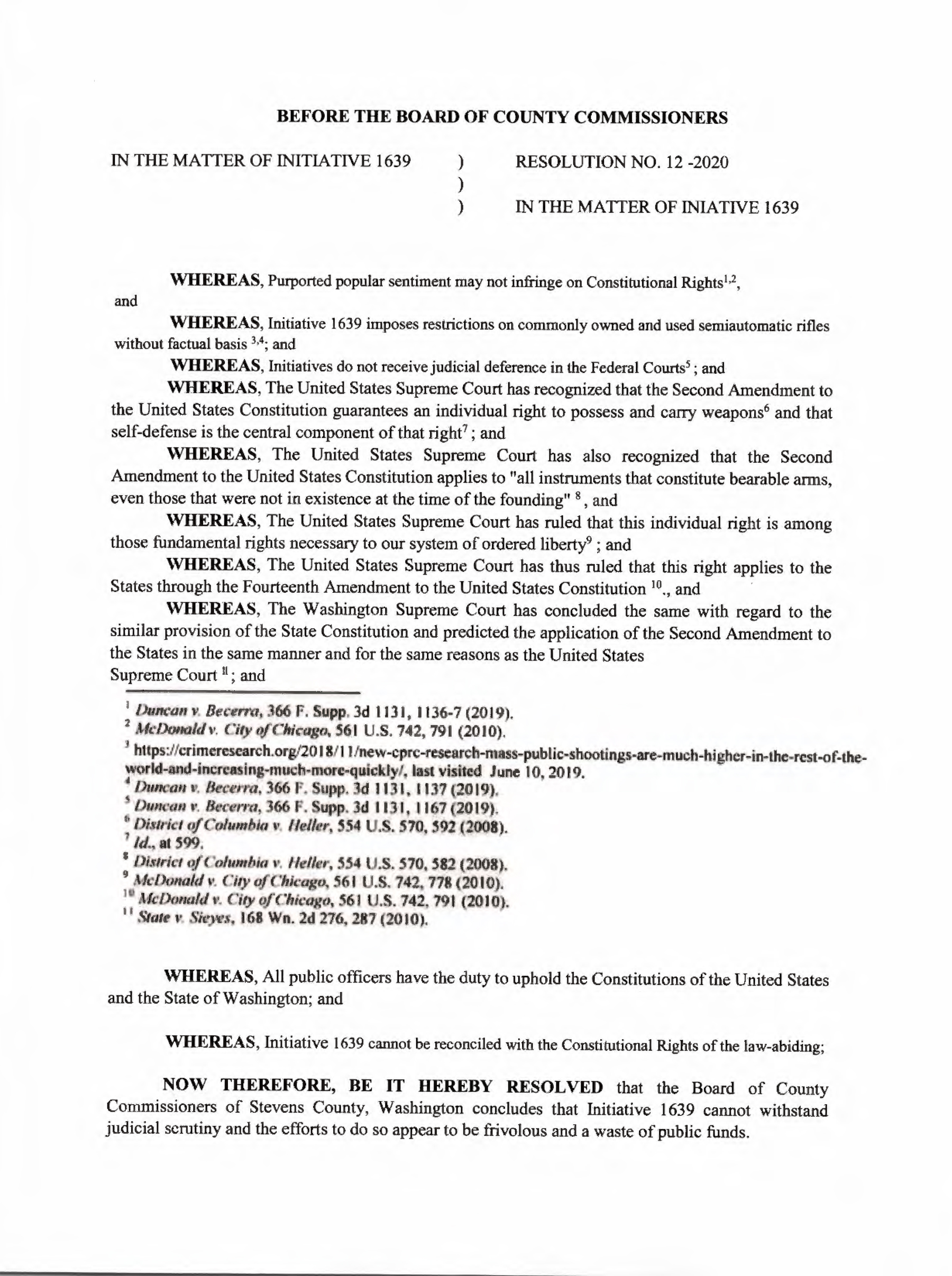 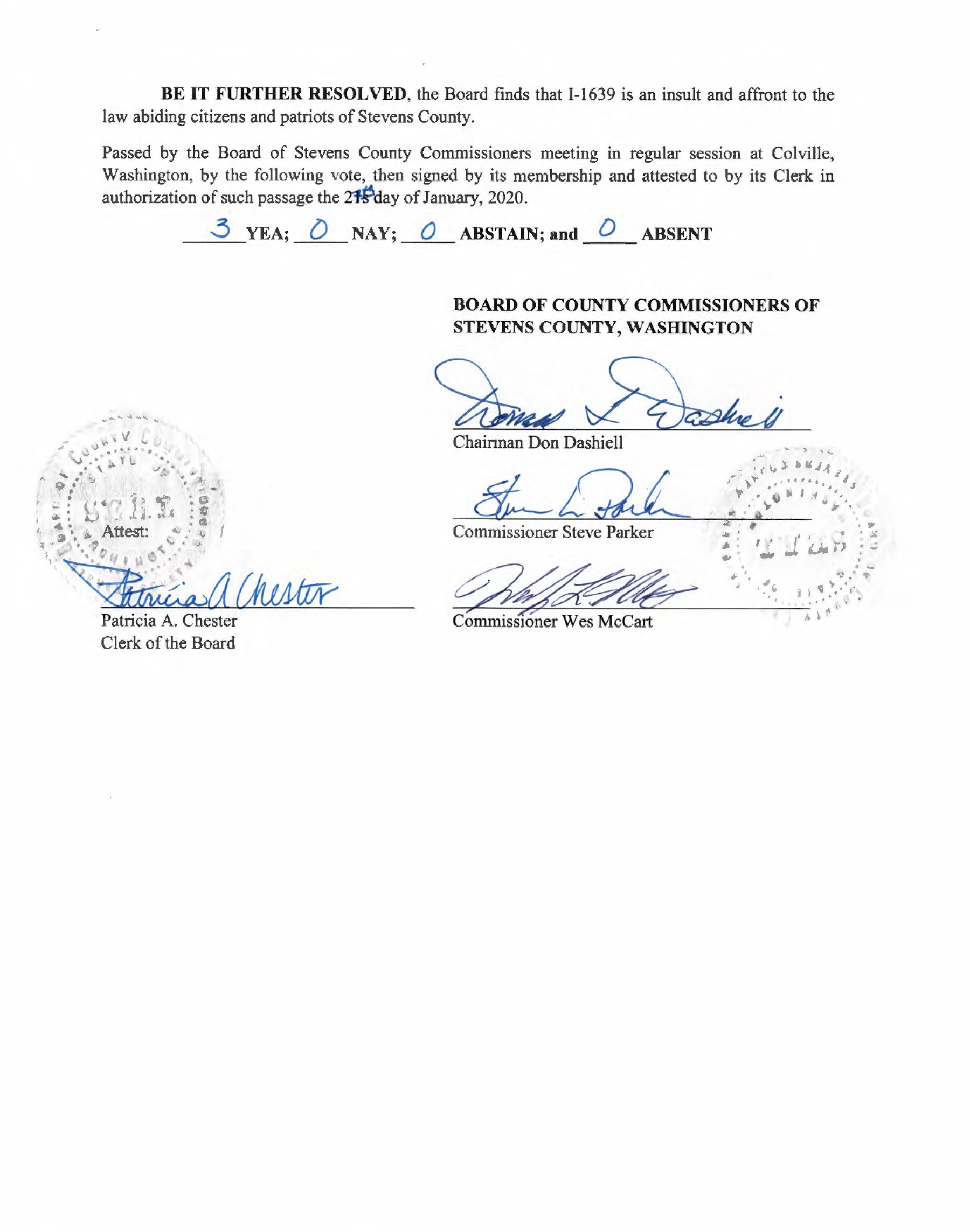 ‹ Police Blotter for Feb. 2-22, 2020 › FRIDAY EDITION: Former Coug leads Deer Park to state, and should you worry about the Coronavirus?