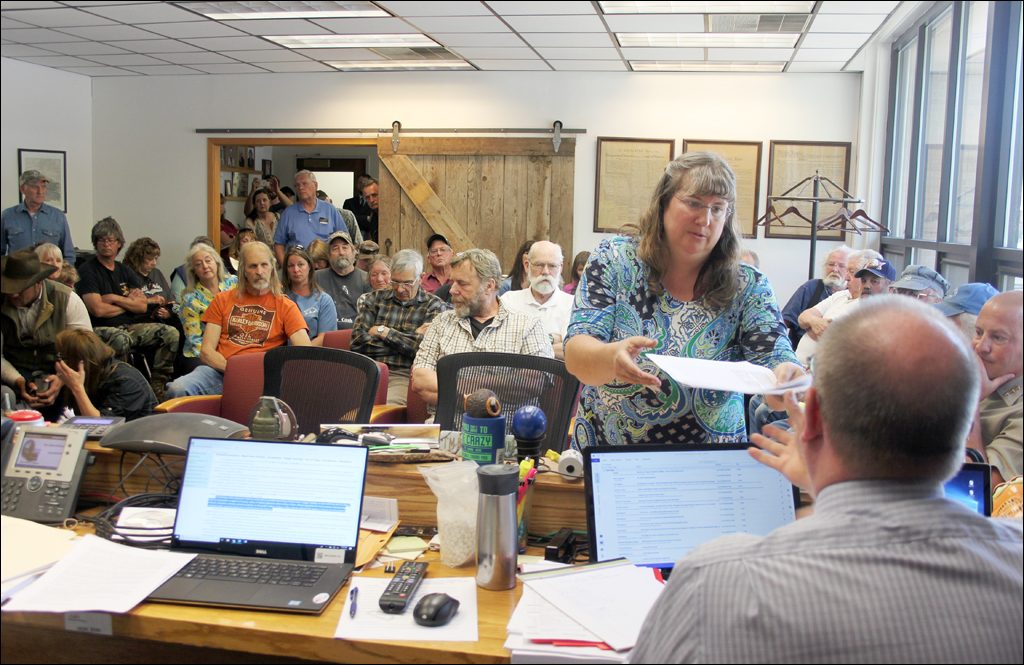 A group of citizens presented a petition signed by close to 400 people that asks the county leaders to utilize provisions in state law that allows the use of dogs to hunt down the dangerous predators and kill them. (Jared Arnold photo)

Dozens of frustrated Stevens County citizens packed the commissioners’ conference room last Tuesday morning, May 7, demanding the board and sheriff take action on the growing cougar problem in the county. The group also presented a petition signed by close to 400 people that asks the leaders to utilize provisions in state law that allows the use of dogs to hunt down the dangerous predators and kill them.

The petitioners showed a copy of a state law that allows local, state and federal agencies to hunt cougars, black bears, bobcat and lynx with the aid of dogs in order to protect livestock, pets, property or public safety. In normal hunting, the use of dogs for pursuing those animals is prohibited.

The group’s petition reads, in part: “We the undersigned, with full knowledge and understanding of the provisions made for the protection of county citizens and their property under RCW 77.15.245, paragraph 2, subparagraph a, do declare our right to expect our County Commissioners and County Sheriff to act in the best interest serving public safety. We also expect to have a team of private citizens from throughout the county to determine measures and act upon as necessary, for the safety of county residents. Child and property endangerment at this level is not acceptable, and will not be tolerated!”

According to data on the Washington Fish and Wildlife website, there have been 58 reported incidents over the last year with cougars in Stevens County. Wolf incidents are at nine during the same period. Incidents include confrontations or sightings as well as depredations on pets and livestock.

Donald Mally of Valley was designated as the first speaker to represent the group of citizens and gave the signed petitions to Commissioners Wes McCart, Don Dashiell and Steve Parker and to Sheriff Brad Manke.

Mally praised law enforcement agencies for their work to protect the public from impaired drivers, domestic violence, reckless endangerment and other criminal behavior but admonished them for not responding to threats from predator animals.

“However, when it comes to the ever so real threat to human safety and property due to public employees protecting their ever so precious apex predators (that being cougars today) no one is willing to step up and do the job that they were elected to do,” Mally said from his prepared statement. “Quit being concerned about state agencies that are never going to do anything that helps the people who are being victimized. The only thing they are going to do is threaten and intimidate the victims.”

Carol Long, along with her mother Thelma Fry of Chewelah, urged the commissioners to take action immediately against all predators and suggested that the declining population of deer and other ungulates is forcing the predators to find prey in the more populated urban areas of the county.

“We are asking you to quickly give [Stevens County Sheriff’s Wildlife Specialist] Jeff Flood the authority to advocate and watch out for the citizens of this county. We would like him to have the authority and ability to pursue with dogs and remove cougars that he feels are a threat to public safety even when WDFW officers do not agree with that assessment. We would also like him to have the authority to take action when WDFW is unable to respond to an incident in a timely manner, with dogs, as time is of the essence when pursuing cougars. I think we can all agree that ungulate populations, especially whitetail deer, are decreasing at an alarming rate in our county. This is forcing all apex predators to seek food in the more populated areas, greatly increasing the safety risk to the public,” Long stated, adding that the county should also move to control other predators including wolves and grizzly bears.

Russ McKinnon, Stevens County resident and member of the conservation group Northeast Washington Wildlife Group, gave his assessment on how the county has reached this point with predators and asked the commissioners to work with surrounding counties to develop an action plan.

“How did we get to this point? Why are we in the position that we are in right now? It is because of poor management policies by [WDFW]. Their philosophy, their agenda goes in a different direction from managing predators in any area of the state, but in particular up here, we don’t appear to have a voice,” McKinnon said, adding predator populations are exploding. “There needs to be a concerted effort by the tri-county area and their commissioners and law enforcement to challenge WDFW and their policies and how they regard our area. They need to know that they need to respond here, they have to react here. WDFW is about misinformation, which is politically correct for lying, and inaction. The root of the problem is management at WDFW and they are the ones that have to hear from whoever has the stroke in these counties to get their attention,” McKinnon explained.

At least 18 people spoke publicly to the commissioners about their personal experiences with cougars, including many stories of attacks on their pets and livestock.

Commissioner McCart said that he is well aware of the cougar issue, especially two past attacks on children in this area, and is determined to make sure WDFW takes action.

“Just so you know, I sat with a bunch of the environmental community, a couple hunters and the department over two summers talking about public safety. When I was told, point blank, that there was no issues with cougars, I came unglued. I remember both of those incidents, so I want to assure you that I’ve not just sat back and let this go without fighting the department on this over and over again. And we’re not going to stop,” McCart said.

Sheriff Brad Manke weighed in and assured those in attendance that he and his office will be working to resolve the issue cooperatively with WDFW. If that does not work, he is willing to have his office take on cougar removal.

“I just want you all to know that I’m not opposed to the Sheriff’s Office taking the steps and doing public safety cougar removal. But my first priority was to make sure WDFW is aware of the problem, that we want to cooperate, we want to work together and we want them to be accountable to us as citizens as well. I’ve had numerous meetings with lots of officials over the last month and finally had a face-to-face with the director and chief law enforcement officer a week ago and we’re discussing all of this. My first option was to hold their feet to the fire. Give me the opportunity to do that. If that doesn’t work, we’ll take the next steps,” Manke said.

Steve Getz of Chewelah questioned Manke about why, if the sheriff is the highest ranking authority in the county, the WDFW is telling the county what to do.

“They have an entire agency dedicated to this. The predator problem is a part of all the issues the Sheriff’s department has to deal with. When [WDFW has] five guys to deal with one issue, and I have 20 [officers] to deal with 30,000 issues, I would rather hold their feet to the fire and make them do their job,” Manke responded.

Commissioner Parker also responded to the concern, blaming the state legislature for giving equal authority to the state agency.

“The state legislature has given WDFW enforcement officers the same status as the Sheriff in the way that they wrote the RCW. So, when they come into the county, they are not obligated to report to the Sheriff, they don’t need to come under the Sheriff. They consider themselves that way. They come in under their own authority, backed by their own agency, with the covering of the legislature and the RCWs. Our Sheriff then has to become the intermediary to assert his position and he has do it on an equal footing. And I think that is absolutely wrong,” Parker said.

“We’ve been letting the WDFW play this game with us for three years now. They’ve had more than ample opportunity to address this issue and they’re not doing it. It’s time for Stevens County, you commissioners, to step up and do something. The department’s not going to, they’re going to continue along the same lines they’ve been doing for years,” Al Martz said to applause from the audience.

The commissioners did not indicate how exactly they would act in response to the petition or comments made in the meeting, but they did thank those in attendance for making their concerns known.

“I want to thank all of you for coming and sharing this with us, I mean that sincerely,” McCart said and reminded everyone to report any predator incidents. “If you see an incident, you have to report it. We don’t know what you don’t tell us. Having that information helps us, whether we’re taking care of it ourselves or if WDFW is taking care of it, we need to know about it.”

“I’m glad you all showed up. I kept thinking ‘okay, this has built to critical mass’ and we know this goes back to when hound hunting was eliminated and the department tends to now veer towards, I guess, a favorable view of predators, somehow or another. I don’t know if they were going to balance the ecosystem or what their goal was,” Commissioner Dashiell said before describing his personal experiences with cougars and other predators over the decades. He also talked about past methods of controlling the cougar population that are no longer allowed.

The commissioners reminded and urged all to report their predator incidents to both WDFW and the sheriff’s dispatch center so that accurate data could be collected and used. Emergency incidents should be reported to 911, while non-emergency situations should be phoned in to the sheriff’s office at 509-684-2555. Non-emergency dangerous wildlife complaints should also be reported to WDFW at 877-933-9847 or online at https://wdfw.wa.gov/about/enforcement/report#.