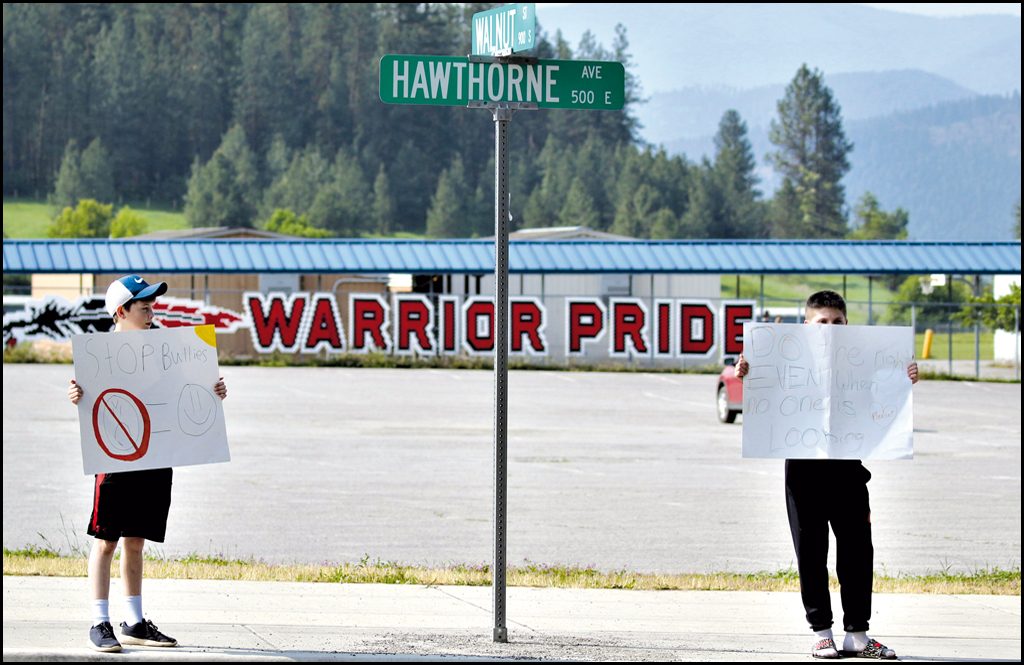 Colville Junior High School students have been holding demonstrations just off school grounds on the south end of the county seat to protest bullying, beginning last week and continuing into this week.

Parents and kids commented to an Independent reporter on scene that bullying has been a constant thing they face and that they feel not enough is being done.

Colville Superintendent Pete Lewis said that this is part of a national issue of kids being bullied. Administrators and other staff members have met with the kids to talk to them about the subject of bullying.

“The most important thing is that kids are safe and they’re not worried about the situation they’re in,” Lewis said. “We have seen nationally where these situations have escalated and we’re continuing to work on dealing with things peer to peer. We want them to be able to learn.”

Randy Cloke, the district’s Harassment, Intimidation and Bullying (HIB) officer talked to the kids about bullying in school and especially over the internet. Both Lewis and Cloke feel that social media has taken bullying to a new level for kids, as now they can be bullied outside of school as well.

For the kids protesting, it was a show of frustration. Student Daniel Miller said, he was out holding signs because he felt bullying needs to stop.

Kids talking with an Independent reporter said they get bullied for a wide variety of reasons including appearance, sexual orientation and that altercations would get physical. They said that the bullying is rampant, and they would like to see more action taken when incidents of bullying happen. They also felt like in the school district, there are favorites in the system and discipline is being enacted unevenly.

While there are anti-bullying signs in the school, the students protesting said that they felt the enforcement was not being carried out. The administration said they can understand the frustration of kids and think moving forward they would like to create a group or club within the school district to help deal with bullying.

Since the protests began, administrators have met each day with the students to seek out possible solutions.

The protests lasted all day with parents bringing the students food.

“That’s my daughter being bullied,” said parent Cheyanna Cook, who said she would like to see more response from administration concerning bullying.

The protesters said that a couple of people also walked by them, ripped up the posters and wrote cuss words on them with a sharpie.
A school counselor also met with students to discuss safety while at the park.

Along with this, the students have been collecting signatures to present to Colville City Hall to help stop bullying.

They will have to deal with the ramifications of missing school, the school administration said, but added some students would only protest for a period or two and then go back to class.

“Student discipline will be handled on an individual basis,” Lewis said. “It is important to be open with kids and understand what they are feeling and respect that.”