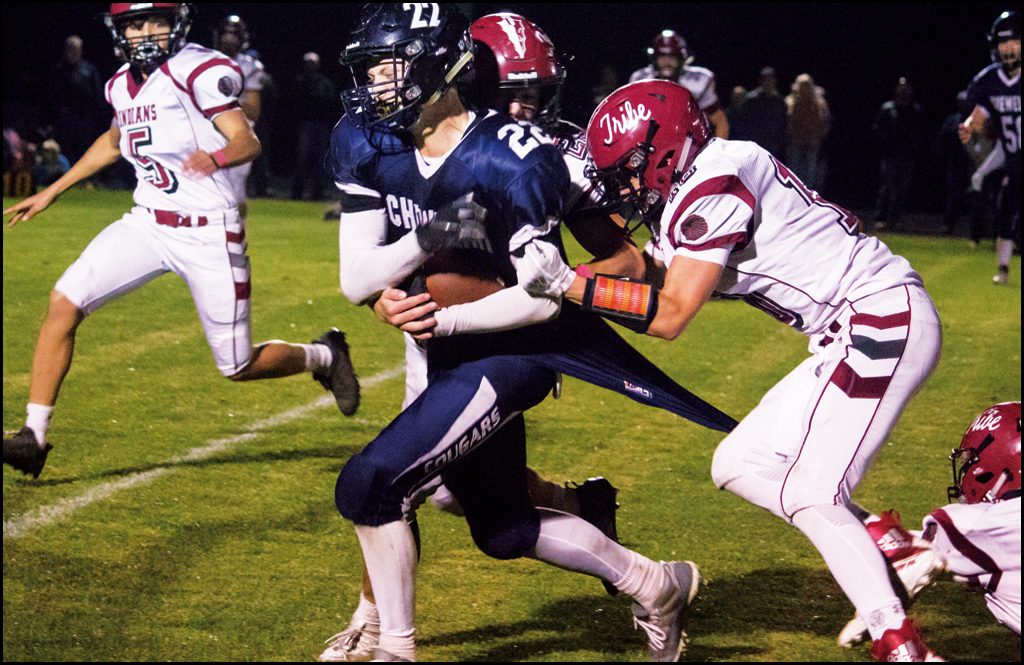 TRACK MEET: Colville pulls away in rivalry game which began as a track meet for the Chewelah Cougars…

Looking only at last Friday night’s final score, the game was a blowout. Comparing the final stats, however, shows that the game was much closer than the scoreboard indicated. Chewelah trailed only 28-20 at the end of the opening quarter, but defending state 1A champion Colville exploded for four more touchdowns through the remainder of the game to take home a 57-20 nonleague win. A look at the ending yardage stats show the Indians with 465 yards and the Cougars at 407 yards, so the fight on the field was more intense than the scoreclock displayed.

The difference in the outcome was that Colville scored on seven of its eight possessions and added a pass interception return for another touchdown. The Indians punted only once. While at the other end of the field, Chewelah scored on three of its first four possessions but then turned the ball over four times on downs and had a second pass intercepted. After the first quarter, the Cougars consistently moved the ball from one end of the field to the other but failed to put the pigskin across the goal line, turning the ball over three times within the red zone. Instead of taking the ball to the house, they left it on the front porch. And that was the bottom line.

Chewelah played its best football of the season in the opening quarter. The Cougars matched the Indians score for score through the first 10 minutes of play and trailed only 14-12 with 2:20 left to play because of two failed extra-point attempts.

Colville scored first when Sam Anderson threw a 59-yard touchdown pass to runningback Grant Michaliszyn with 11:01 left in the first quarter. Anderson went to the air only six times, completing four passes with three being touchdowns. Lucas Michaelson added the first of his eight straight extra-point kicks to give the Indians a 7-0 lead.

Chewelah instantly replied with a 65-yard touchdown pass from Jake Jeanneret to fullback Kaden Krouse to make it 7-6. Krouse ran a vertical route down the middle of the field and Jeanneret put the ball into his hands in stride. Krouse then outsprinted Colville pursuers the remaining 40 yards to the endzone with 9:28 left in the quarter. However, the extra-point kick missed, so the Cougars trailed 7-6.

Only two-and-a-half minutes had blinked off the clock and the ball had been snapped only five times, but two touchdowns had already been scored. That was only an introduction to the rest of the quarter.

Colville scored again on its second possession, covering 70 yards in eight plays. The drive was fueled by two Anderson completions to Paul Skirko, one that covered 22 yards and the other that for 23 yards that went all the way to the endzone. The Michaelson kick gave the Indians a 14-6 lead with 5:10 remaining in the first quarter.

“Watching Paul score on passes is satisfying and makes my job easy,” Anderson said about Skirko. “He’s a great athlete and I’m looking forward to connecting with him and the rest of my weapons in the future.”

Again, Chewelah responded quickly. Jeanneret threw a 30-yard pass to a leaping Jaron Baldwin that moved the ball inside Indian territory. Jeanneret then made a pair of air mail deliveries to Nick Franks for 17 yards and 32 yards, giving the Cougars a first down on the Indian two-yard stripe. Three plays later, Jeanneret and Franks connected on a throw into the endzone for a touchdown, but the extra-point attempt failed, leaving Chewelah two points short at 14-12 with 2:20 left in the quarter.

“The first quarter for us was pretty good,” Cougar WR Nick Franks said. “Our team was marching the ball well. I think Kaden was able to get down field because I don’t think they were expecting our all state running back to be running the fade so I think that caught them off guard. As for me, I was able to get past the corner on several plays.”

Colville quarterback Sam Anderson said it felt like the team started the slow in the first half, adding that he had a lot to improve on this season. His statistics, however, look impressive and he had a few passes that were placed exactly where they needed to be for a score.

After Chewelah pulled within two, the Indians wasted no time in scoring their third touchdown of the quarter. It came on a 63-yard run by Michaliszyn with 1:17 remaining on the clock and was followed by Michaelson’s extra-point kick that widened the Indian lead to 21-12. Colville scored again when Dale Martin picked off a Cougar pass and ran 28 yards across the goal line. Michaelson’s fourth extra-point kick of the quarter left Chewelah on the short end of a 28-12 score with less than a minute to play on the scoreclock.

This was all the time Chewelah needed to add one more touchdown to its score. A 51-yard completion from Jeanneret to Franks plus a horse collar penalty gave the Cougars a first down on the Colville five-yard line. Krouse ran the ball just short of the goal line as time expired to end the opening quarter, but Jeanneret ran the ball to pay dirt on the first play of the second quarter.

Unfortunately, that was the final time Chewelah crossed the goal line. Colville scored four more touchdowns during the remainder of the game. Anderson launched a 54-yard pass to Skirko in the second quarter that gave the Indians a 35-20 halftime lead. Colville scored three more times after the intermission. Anderson ran a quarterback keeper 57 yards to the endzone, Michaliszyn scored on a 19-yard counter play, and Dale Martin scored on a nine-yard run.

During that same time, Chewelah marched the ball up and down the field from one end to the other through 36 minutes without crossing the goal line. In the third quarter the Cougars started on their 30-yard line and used the Fisk air raid offence to quickly get to the other end of the gridiron. Krouse caught four Jeanneret passes covering 8, 30, 8, and 26 yards to advance the ball to the Colville five-yard line. There, the drive bogged down and the Cougars turned the ball over on downs less than five yards short of the endzone.

Chewelah received the second half kickoff and used a 37-yard wingback pass from Jake George to Franks to fly the ball over the midfield stripe. Three plays later, the Cougars turned the ball over on downs less than six inches by measurement at the 34-yard stripe.

Near the end of the third quarter, Chewelah gave up the ball on downs at the Colville 13-yard line to end a 65-yard drive that featured a 24-yard catch by Jaron Baldwin, an 11-yard grab by George, and an eight yard snag by Baldwin. However, Jeanneret’s seven-yard fourth down run came up short of the turf needed to move the chains.

Then he threw to Franks for a 10-yard pick up that was aided by a block from Cole Davis. Nonetheless, four plays later Chewelah yielded the ball on downs on the Indian 19-yard line. It was the third time the Cougars relinquished the ball inside the red zone.

The loss dropped Chewelah to 0-3 in pre-league play and into eleventh place in the class-2B rankings. Colville improved to 2-1 and moved into eighth place among 1A teams in the latest MaxPreps listing.

For Chewelah, Jeanneret completed 20 of 31 passes for 340 yards and a pair of touchdowns. George added one completion for 37 yards. Krouse topped Cougar receivers with nine catches for 153 yards. Franks had six receptions for 147 yards. Baldwin caught four passes for 66 yards, and George had an 11-yard catch. In all, Chewelah completed 21 of 32 passes for 377 yards.

“I was able to get the short and long balls because of the execution of the routes and the perfect ball placement by Jake,” Franks said.

Chewelah’s ground attack sputtered. The Cougars ran for only 30 yards from 17 carries. Jeanneret gained 16 yards, Krouse had 8, and Nick Skok had 6. This will definitely be on Coach Jim Fisk’s “fix it” list for this week. Altogether, Chewelah totaled 407 net yards.

Michaliszyn was the workhorse for Colville. He carried the ball 16 times for 154 yards and scored twice. Anderson had four carries for 77 yards, Martin gained 52 yards from seven carries, Tyler Baun had 18 yards from eight totes, and Takoda Morrison had a carry for 10 yards. The Indians finished the game with 319 rushing yards.
Anderson completed four of six passes for 146 yards and three touchdowns. Skirko had three catches for 87 yards and Michaliszyn had one catch for 59 yards. Colville’s total for the night was 465 yards.

Davis led the Chewelah defense with 10 tackles. Krouse and George each had 9, Gunnar Hofstetter had 8, Jake Jeanneret had 6, Franks had 4, and Clay Jeanneret and Eli Larson each had 3. Nic Shierloh, Sam Triplett, Titus Tapia, and Baldwin each had 2. Nick Skok and Cole Piepgras had one apiece.

The Cougars travel to Reardan to meet the ninth-ranked Indians this Friday night. The Indians are undefeated so far this season with wins over Davenport, 56-34; Kettle Falls, 41-0; and Northwest Christian, 41-14. All three are Chewelah’s northern division opponents. Reardan runs the ball out of a wishbone offense with two tight ends and the fullback as the lead blocker. The Indians widen into a spread look to pass. Colville travels to Lakeside for its first league encounter

“As for our record my team and I are not worried,” Franks said. “I think playing those tough teams have prepared us for the rest of the season. These games have been very important for us, so we can see what we need to improve and implement that coming into league play.”