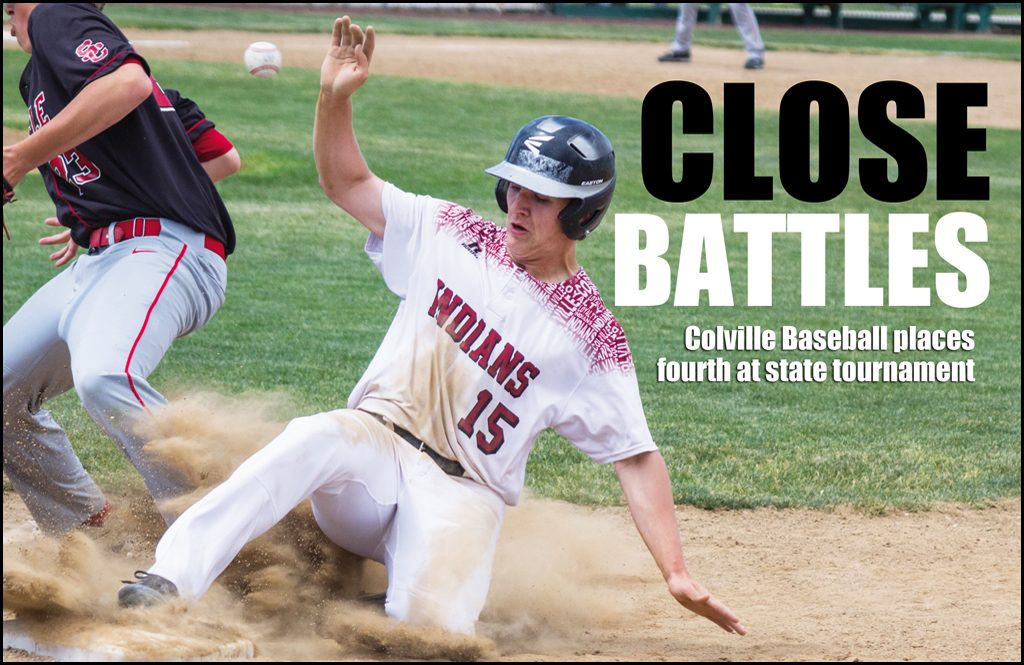 CLOSE BATTLES: Indians have best finish in school history at State 1A tourney…

Nolen Stevenson pitched a great game for Seattle Christian and handed Colville their first loss in six games at Yakima County Stadium at the 1A State Semifinals on Friday. Saturday brought a 7-2 loss at the hands of Chelan as the Indians finished fourth at State, their highest mark ever as a program.

“The players, coaches and I am sure even parents were expecting us to walk out of Yakima holding the State Championship trophy,” Colville Coach Blake Sjordal said. “It was a tough way to end such a successful baseball season. What this group of young men did was change the thinking for future players. A final four appearance, or a state championship, only sounds like a dream until you are there competing for it.”

Colville led Seattle Christian 3-2 in the top of the fifth before the Warriors notched a three-run rally and would hold on to win 6-3. Both teams had seven hits including a two-hit performance by Colville’s Jake Lindquist and a triple by catcher Grant Michalizsyn.

“The score does not quite reflect how close that game actually was,” Sjordal said. “Most of our baserunners reached with two outs which took our bunt game out of the equation. They also swung the bat well. They put a lot of balls to the outfield and made us work for each and every out. It was a good club we faced. I feel that we had every opportunity to blow the door wide open in that game.”

Against Chelan on Saturday, the Goats got out to a 5-0 lead in the first inning, added two more in the top of the third and kept Colville off the scoreboard until the bottom of the seventh when they scored two runs.

John Knight did his best to help his team, going 2-for-4.

“Chelan is a very good offensive club,” Sjordal said. “We knew they could swing the bats, and they did just that in inning one. We had to make a pitching change, not because Jake was throwing bad, but because Chelan was red hot out of the gate.”

Sjordal added that with a few different bounces of the ball, Chelan and Colville could have been facing off for a state championship.

Colville finished the year with an 18-4 record. Senior leadership played a big part of that, and the Indians had lots of intangibles this season.

“That is something this group of players can remember for years to come,” Sjordal said. “I truly believe they set a new trend.”

There will be some new faces next year for the Indians, but as high school baseball season goes — it usually just morphs into summer Legion ball.

“We graduated our 1-2-3 pitchers, 1st base, 2nd base, shortstop, and two outfielders. There are a lot of areas we will need to fill,” Sjordal said. “Next year starts now for baseball. Legion baseball takes place this week.”

Colville has developed a “next man up” mentality in its football and wrestling programs, so no doubt it will carry over to baseball. Sjordal will be looking for the next round of players who aren’t afraid to get dirty and push Colville High School to the next level.