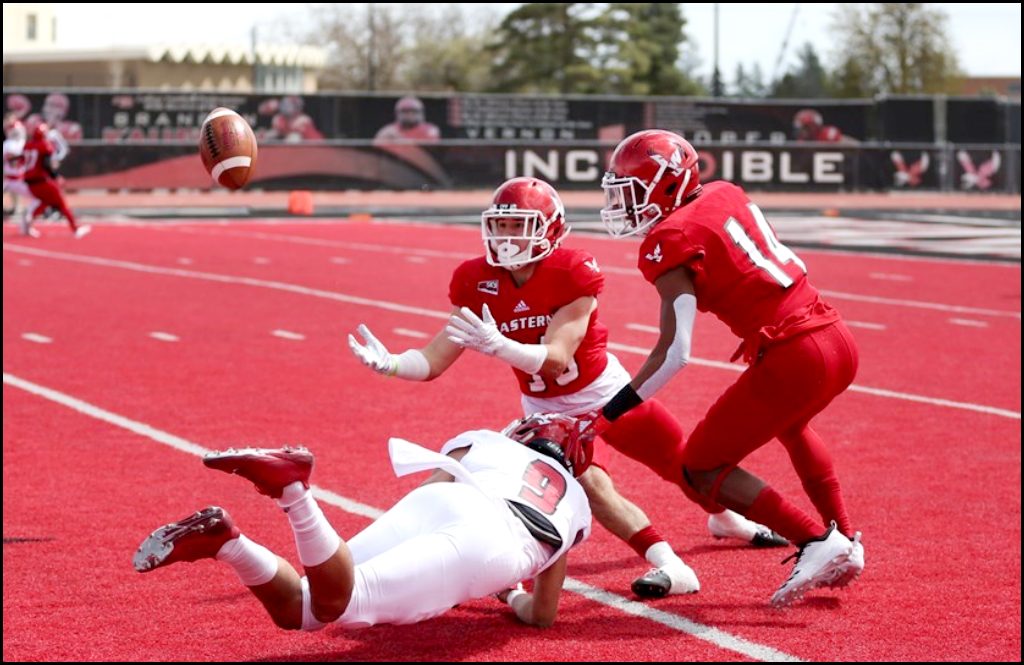 The Eagles are coming off an appearance in the FCS National Championship Game. (EWU Photo)

Eastern Washington begins season ranked No. 4 in the country…

In just his second season as Head Coach for the Eastern Washington football team, Aaron Best guided the Eagles back to the NCAA FCS Division I championship where they fell to powerhouse North Dakota State.

Despite heavy losses in leadership and experience, the team lost 25 seniors from the 2018 team, expectations for the Eagles are still very high as they start the year off ranked No. 4 in the STATS FCS preseason poll behind the Bison, James Madison, and South Dakota State.

On the plus side, the Eagles will return junior Quarterback Eric Barriere, who starts the season as one of 25 players on the Walter Peyton Award watch list as the best player in FCS.

In total, five players return on offense and four on defense, and the Eagles have ten players on the 2019 roster that received all-league honors in 2018 or in previous seasons.

Joining Berriere, Blackburn, Levao, and Schlichting as an offensive returner is Sophomore receiver Andrew Boston, who garnered Freshman All-American accolades in 2018. Levao and Schlichting earned second-team All Big Sky honors in 2018, and they will be joined on the line by senior Tristen Taylor, an all-league selection in 2016 and 2017, who played in just three games before an injury cut his 2018 season short.

A potent running attack in 2018, more than 250 yards a game, sees four main contibutors return in 2019, lead by junior Antoine Custer Jr., and all-league honorable mention in 2018 and second team honoree in 2017.

The defensive side features experience in most every facet and is anchored by the linebacking group lead by junior Chris Ojoh, who finished 2018 ranked 27th on the Eagles’ all-time single-season tackles list with 105, and senior so-captain Jack Sendelbach, who missed 2018 with an injury.

The defensive backfield is a mixture of experience, with the cornerback position seeing the most turnover of any unit, but the safety positions featuring two seniors and three juniors. Senior Dehonta Hayes was the team’s third leading tackler in 2018 with 87 and added an interception on the season. Junior Calin Criner joined the starting group late in the season, but turned in a solid 2018 with 76 tackles and three interceptions.

Despite all the experience amongst the defense, the defensive line may hold the most. Senior co-captain in 2019 Dylan Ledbetter, a 2018 honorable mention all-league selection, anchors the line from the Nose Guard position coming off a campaign where he had 45 tackles, 1 ½ sacks, and three blocked kicks. Ledbetter is joined by senior Jim Townsend at Defensice End, and Sophomore Mitchell Johnson, a Freshman All-American and second team Big Sky selection in 2018, at the “Buck” End position.

Eastern will start their 2019 season with a strong test on the road against FBS preseason No. 12 Washington on August 31.