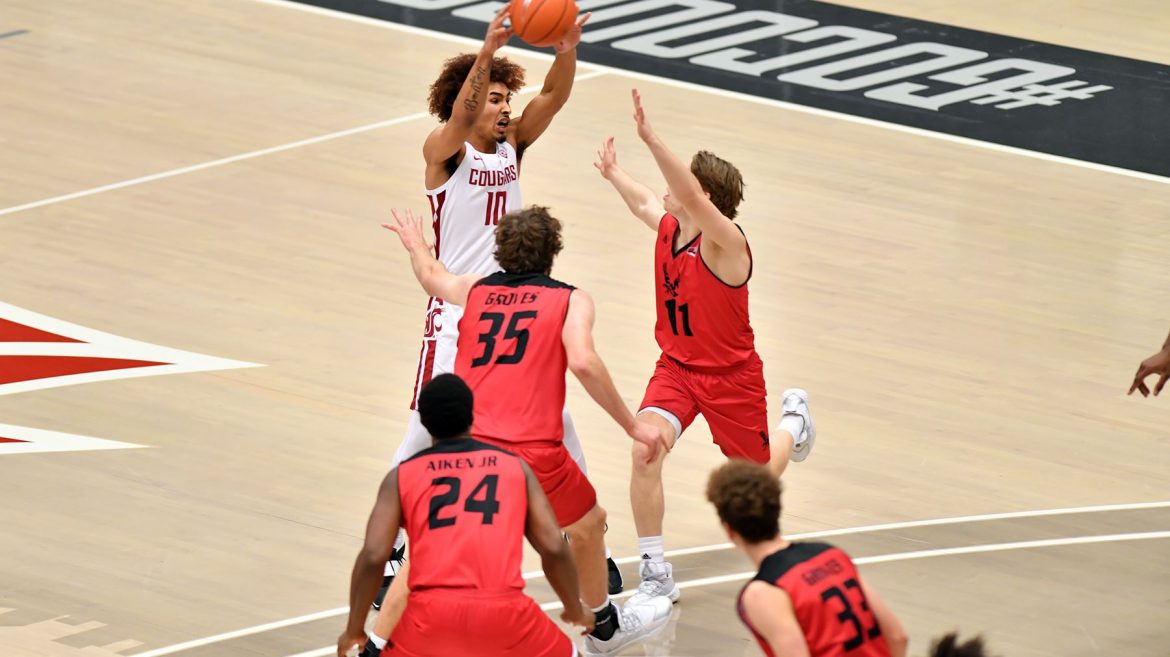 In a pandemic kind of way, Northern Colorado’s loss was Eastern Washington’s gain.

The Eagles, who were looking for an opponent to play their second contest of the season after the cancellation of a home game, will play at Arizona of the Pac-12 Conference on Saturday (Dec. 5). The game is broadcast by the Pac-12 Networks at 11 a.m. Pacific time (noon MST) from the McKale Center in Tucson, Ariz.

Eastern games are aired live on radio on 700-AM ESPN, 105.3-FM, via the web at tunein.com and via mobile phone app, with pre-game coverage starting a half-hour prior to tipoff. Larry Weir serves as the play-by-play broadcaster.

Eastern opened its season with a 71-68 loss at Washington State on Nov. 28, and that same day had its home opener versus Montana Tech for Nov. 30 cancelled because of Covid-19 concerns within the Orediggers program. Northern Colorado, meanwhile, announced on Nov. 25 it was pausing activities in its program, and that led to EWU replacing the Bears on Arizona’s schedule for Dec. 5.

The Eagles have played the Wildcats once before, a 79-45 loss on Dec. 28, 2004, in the Fiesta Bowl Classic in Tucson, Ariz. Arizona was ranked No. 14 nationally at the time, and EWU went on to beat Butler 67-62 two days later to finish third in the tourney.

In the loss to Washington State, Eastern led for 33:07 of the game before a late 13-5 Cougar run turned the tide. Eastern had only eight players available for the game and just six played. The Groves brothers out of Spokane’s Shadle Park High School – Tanner and Jacob – combined for 33 points and 17 rebounds in the loss.

The Eagles enter the 2020-21 season with four starters back from last year’s squad which finished 23-8 overall and 16-4 in the Big Sky. The Covid-19 Pandemic resulted in the cancellation of the season, including the conclusion of the Big Sky Conference Tournament and the entire NCAA Tournament.

“We’ve been able to see how they’ve gelled so quickly, and obviously, the comradery and chemistry of the team knowing each other so well is great,” said Eastern head coach Shantay Legans, whose team returns 10 total letterwinners. “Now we just have to start defining roles, and being able to get that established will help us a lot. I think they pretty much understand each other’s games and that is important. And it’s our job as coaches to just make sure that we are pushing them in the right direction and they are getting everything done in the right manner and the right sense. I do think we have a pretty good ball club.”

Legans, the reigning Big Sky Conference Coach of the Year, led EWU to a final record of 23-8 overall and 16-4 in the league in the 2019-20 season. Legans is now 59-41 in his three years as head coach for a .590 winning percentage. In league games, he has directed EWU to 13, 12 and now 16 victories, winning 71 percent for a record of 41-17. Both percentages are currently the best among the eight men who have been head coaches in EWU’s tenure in the league, and his 41 league wins is the best three-year stretch in school history.

More recently, in the spring of 2020, Legans was selected to ESPN’s “40 Under 40” list of the top NCAA Division I basketball coaches under the age of 40. He was selected No. 11 — eighth among head coaches — in the list of coaches ranked by achievement and potential.

Eastern’s school-record 16 Big Sky wins a year ago included sweeps over seven of the league’s 10 other teams, and a split versus Idaho State and Idaho. Eastern was swept by Montana, which had won the two previous regular season and tournament titles. The Eagles had just two seniors – Mason Peatling and Tyler Kidd – so EWU has high aspirations for 2020 and beyond.