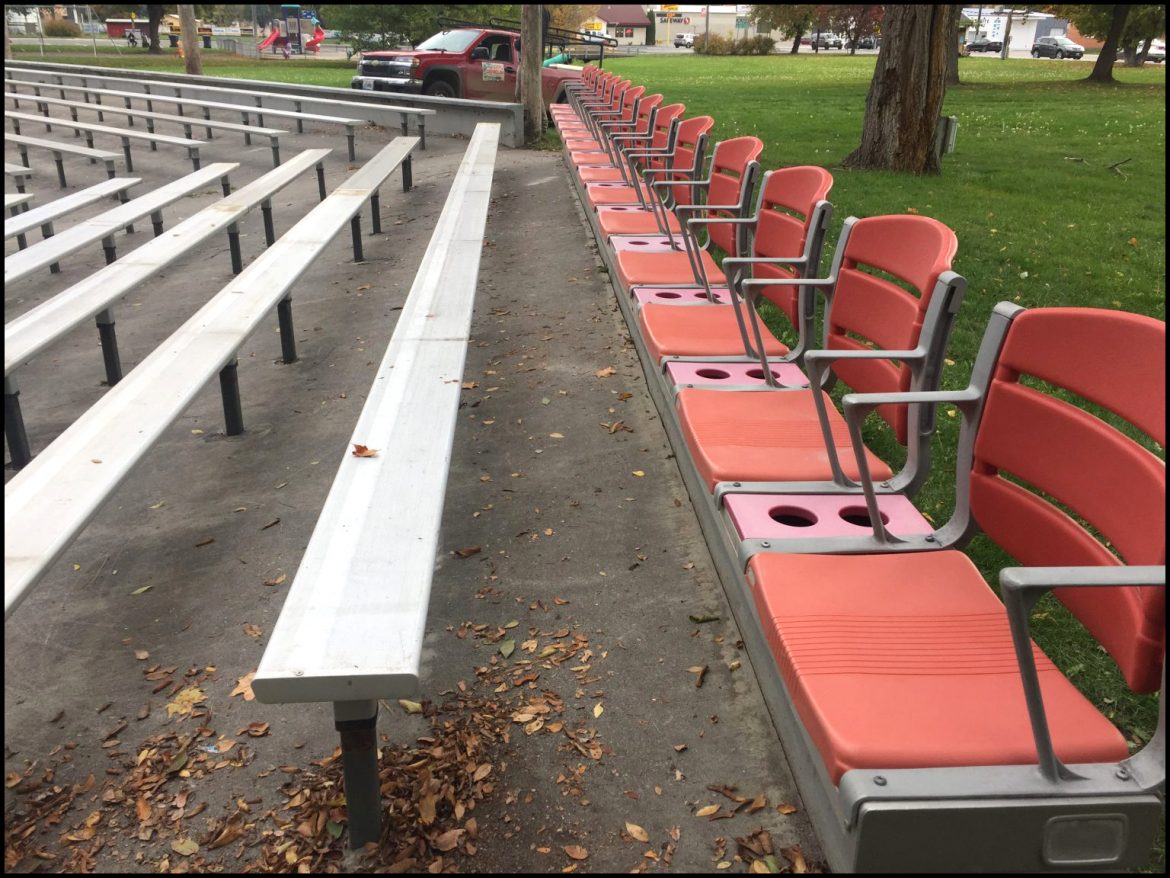 CenterStage in the Chewelah City Park has been a gathering point for the community. Primarily serving as the main entertainment venue during Chataqua along with other events during the year – the small amphitheatre has hosted movies, veteran events, plays, concerts, Allen Stone and even a screaming contest.

The concrete bleachers, however, were showing their age and becoming tougher to maintain for the city.

“The concrete seats were falling apart,” Public Works Director Mike Frizzell said. “We patched a few together every spring. But the patches were just a bandaid and not a very good one at that.”

An opportunity arose as the construction company in Spokane that was tasked with the demolition of Joe Albi Stadium had some surplus bleachers and seats left over. The city was able to get these items and bring them up to Chewelah last month for installation.

Most of the public works crews for the city helped with the project. First the cement bleachers needed to be removed, with crews having to use all sorts of equipment and elbow grease to remove the re bar-reinforced seating.

Once removed, Ken Grimm ordered, cut and welded a bracket system for the new seating. He then welded the new brackets to make the benches work for the metal posts sticking out of the concrete floor.

“Everyone else provided the muscle to disassemble the concrete benches with sledge hammers and haul off the rubble,” Frizzell said. “Then they assembled the new seating.”

There will now be metal bleachers along with plastic seats with backs and cupholders.

Frizzell said that the new seats should handle the weather much better than the previous concrete bleachers.

“The slightest crack in the concrete would allow moisture to get in and freeze, causing further cracks and disintegration,” Frizzell said. “The concrete only lasted about 30 years and the benches in Joe Albi have lasted much longer.”

Kenny, Will, Colby, Jason, Zach, B and Frizzell worked on the installation. Since the seats and chairs did not cost anything, the city also saved on having their own crews install them.

Mayor Dorothy Knauss said she was happy and grateful for the work that crews put in to provide another upgrade to Chewelah City Park.