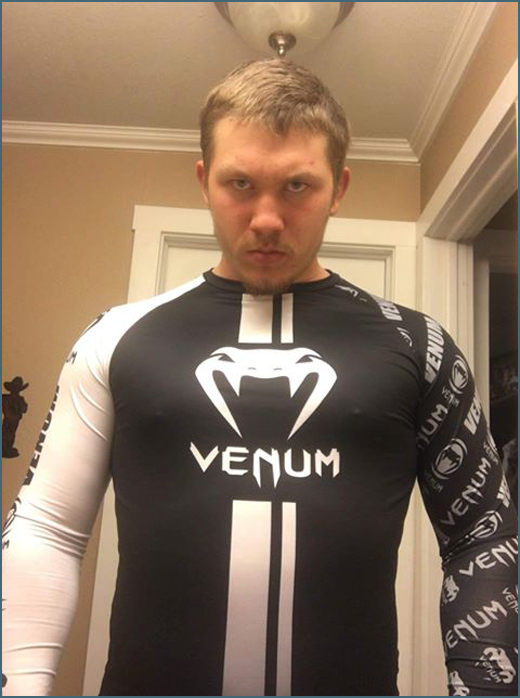 Josh Dehnel will be defending his MMA title this weekend. (Courtesy photo)

Chewelah’s Josh “The Blue Collar Brawler” Dehnel will be defending his MMA title this weekend, taking on Kevin Sanchez out of Sacred Scars. Dehnel began fighting in MMA in 2018 and currently had a 5-0 record along with the Amateur Heavyweight Belt for Proving Grounds Amateur Cage Fighting.

Dehnel’s title defense will be held on July 26 at the Hub Sports Arena in the Spokane Valley at 7 p.m. Tickets are $20 and there are three title fights on the card.

“Josh has been training for this event for about two months at our gym,” Chewelah Jiu Jitsu and MMA instructor Kris Rancourt said. “We don’t know much about his opponent other than he is a big, athletic dude.”


“Trustin’s fight will be a rematch of his last fight where he tapped his opponent in the first minute of the first round,” Dehnel said. “Bo’s has two opponents in mind but it will be his first fight and his background is a tough kid out of the Navy so far, but he shows great promise for the future.”

The Spokane area has become something of a hotbed for MMA fighters with many of them moving to the bigger circuits like Belatore and UFC. Dehnel said that seeing stories of Spokane area fighters make it only serves to push him and make train harder.

Chris Rancourt oversees Chewelah Jui Jistsu and trains adults as well as kids. Working with friends and fellow classmates, Dehnel says its a lot of work under Rancourt’s watch.

Dehnel works out three times a week and as many as four times while also juggling a construction job down in Deer Park.

“It gives me a reason to stay active and we’re all friends working out so it’s great camaraderie,” he said. “Chris is a great coach, he’s very cautious and makes sure we don’t get hurt.”

Dehnel noted Rancourt’s observant nature and how he always shows interest in how his fighters are doing.

“He’s always our cornerman and always very supportive and making sure we’re doing everything right,” he said.

Dehnel added that learning a martial art helps with discipline on all levels along with being a way to defend yourself.