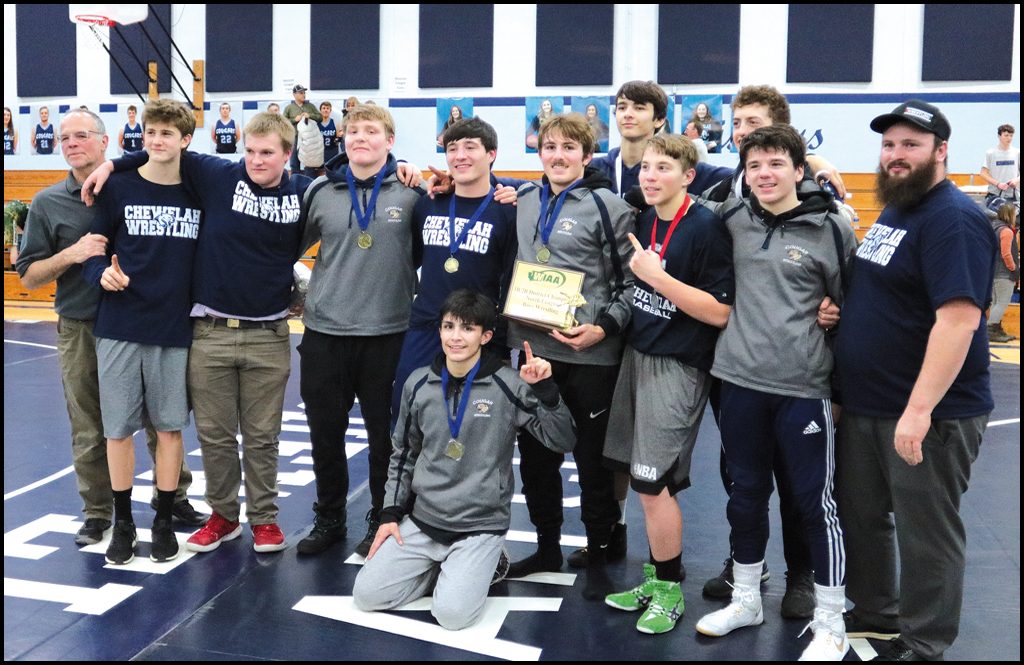 In addition, Cougar 120-pounder Kristen Erickson placed third at the District 7/8 Girls Sub-Regional Tournament hosted by Liberty over the weekend. Erickson won four of her five matches, pinning all four opponents. Her lone loss was to fourth-ranked Maizy Feltwell from Liberty. Erickson is the state’s ninth-ranked 120-pounder. She now advances to the district tournament in Othello this weekend.

Erickson won her first two matches, pinning Joally Ortiz (Kamiakin) in 0:35, and then pinning Mattison Stayrook (Southridge) in 2:33. After losing to Feltwell in the semifinals, she pinned Maria Gardner (Hanford) in 2:36, and finished the day by pinning Stayrook for the second time in 2:48 to earn the third-place medal.

Last Thursday’s tournament here was set in an eight-man bracket format, but several weight classes did not have a full bracket. Some champions had to make only two trips to the mat to earn their title.

Acosta won both of his bouts on his way to al 132-pound championship. He pinned Luke Erickson (Mary Walker) in 1:20 of his semifinal match. He then scored a 9-0 major decision over Tristen Wood (Almira-Coulee) in the finals. Acosta will face Reid Bartels from Liberty in his first bout of the regional tournament in Reardan.

Crocket had to wrestle twice on his way to his 138-pound championship. He pinned teammate Jonathan Thompson in 1:47, and then he pinned Wrangler Wagner (Wilbur Creston) in 1:57 to earn his first place medal. Crocket will meet Trevor Waterbly from Northwest Christian in the first round of regional competition.

Clay Jeanneret pinned both of his opponents en route to his 145-pound championship. First, he pinned Tristan Smith (Almira-Coulee) in 2:00. Then, he pinned Michael Small (Mary Walker) in 3:54 in the finals. Cody Jenkins from Davenport will be his first regional opponent.

Defending state 170-pound champion Kaden Krouse pinned his first opponent Braxton Edwards (Mary Walker) in just 24 seconds. It took him a little longer to pin Sven Rasmussen (Selkirk), but he got the job done in 3:57 to win his weight bracket. Colfax’s Trentin Ensley will be his first opponent this Saturday.

Cougar 182-pounder and defending state champion Jake Jeanneret did not have to wrestle at all to be presented the first place medal in his weigh division. He was the lone competitor in his bracket. On the other hand, Jeanneret will not have the opportunity to defend his state championship as he will be having knee surgery to repair a torn meniscus.

Davis pinned both of his 220-pound opponents on his way to a first place medal. He pinned Skyler Schurger (Mary Walker) in 1:31, and then pinned Nolan Haddenham (Republic-Curlew) in 2:12 to win his bracket. Davis will be paired against John Bernardi from Davenport for his first regional bout.

Chewelah had two second place medalists. Hunter Gilroy placed second in the 152-pound weight bracket and Cole Piepgras was the second place 160-pounder. Gilroy pinned teammate Levi Miller in 3:47, but lost his championship bout to Logan Strozyk from Wilbur Creston. Piepgras pinned Jadin Benson (Almira-Coulee) in 4:44 and then lost a decision to Bert Burnett (Selkirk) in the first place match.

Two Cougars earned third place medals. After losing his first bout, 152-pounder Miller won his next two matches, he pinned Nathan Burgess (Mary Walker) in 0:19, and followed up by pinning Bryce McDaneld (Kettle Falls) in 0:51. Likewise, Rainer lost his first bout, but pinned Tristan Smith (Almira-Coulee) in 1:31 to earn his medal. Johnathan Thompson placed fourth in his weight bracket to earn his trip to the regional tournament.