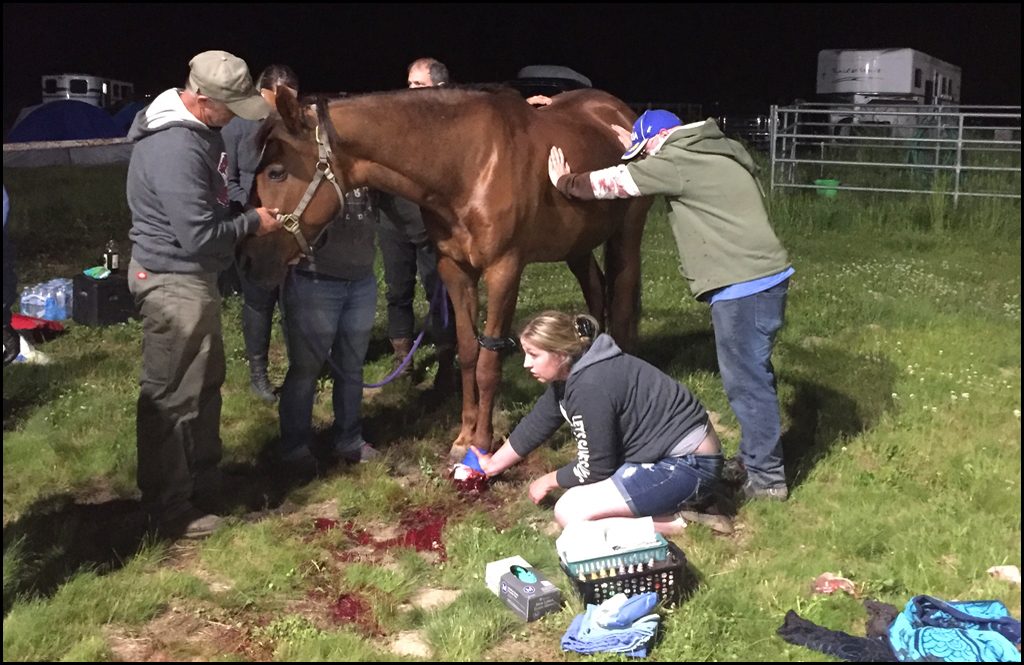 Cass Ward, a Chewelah Vet Clinic Assistant helped tend to an injured horse after it injured itself on a horse trailer. (Brandon Hansen photo)

Saturday nigh’t jousting had to be postponed at the Tournament of the Inland Empire last week to Sunday after a non-jousting injury to one of the horses. Before the jousting event at the Clayton Fairgrounds was set to take place after 9:30 p.m., something had apparently spooked one of the horses, Sienna, which banged her hoof up against a horse trailer, cutting it deeply.

The horse’s owner, Sarah Compogno and jousting competitors immediately realized there was an issue and it was a joint effort by the group to stop the bleeding. Tieg Thornton immediately put pressure to the wound and Robert Odekirk applied a tourniquet to Sienna’s leg, while Carson Hentges kept timing on the application of the tourniquet for blood flow. Melinda Leach also played a big part in stabilizing the horse and instructing others what to do. With the horse losing blood however, the other horses became skittish and it was apparent that jousting would not be possible.

When the public address system announced to the crowd that a horse had been injured and an artery nicked, Chewelah veterinary assistant Cass Ward, in the audience, offered her services.

“We love being in a community like this and we have been very spoiled by the amazingly talented and kind individuals we have come across in our crowds,” Tull said. “This isn’t the only time we’ve had a crowd member help. We’ve had an instance of an actor at one of the festivals we have performed at turn out to be a retired farrier and assisted us when we had a horse throw a shoe before during a show.”

When Ward approached Sienna, she observed how calm the horse was in what was otherwise a chaotic situation.

Ward noticed blood on the ground and while a large amount in human standards, she said that horses can lose a considerable amount of blood before it becomes life-threatening. After seeing the damage, which included two arteries nicked and several veins also bleeding above the hoof, she worked on applying pressure to the wound and when EMTs from Stevens County Fire District No. 1 arrived to help tend to a jouster who had been kicked while tending to the horse, a more substantial tourniquet was put on Sienna.

Ward said the danger to the horse was averted thanks to the immediate pressure put on the wound.

Deer Park Veterinarian Larry Gay arrived within an hour of the call and sedated the horse then sowed up the wound. After all was said anddone, a night expected to be spectating jousting turned into a four-hour episode for Ward who has been called into action while off the clock before but never as a spectator at an event.