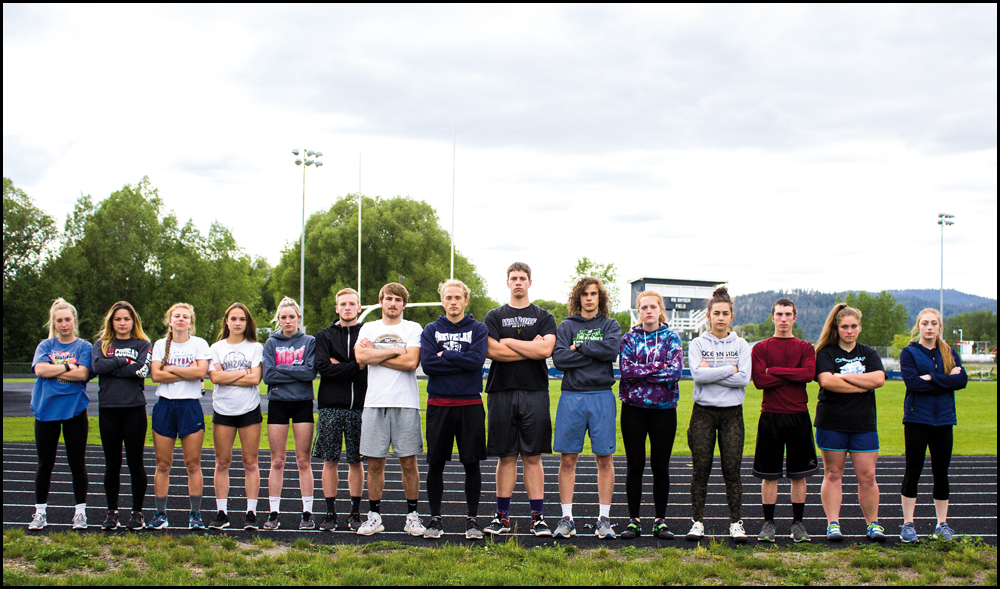 Roll out the Roos Field red carpet. The Chewelah Cougars are on their way to Eastern Washington State University for the 2019 State 2B Track and Field Championships.

The wet and windy weather at Central Valley’s track and field complex provided the backdrop for some hot and humid numbers as Chewelah qualified a record total of athletes to compete in this year’s state championships. Fifteen Cougars will make the trip to Eastern Washington University this Thursday through Saturday, led by district champions Lily Kirry and Wade Baker.

“We are thrilled,” Track and Field Coach Shirley Baker said. “Our team has been affected by the low number of state allocations we had in 1A. We only had two allocations from our district last year, whereas in the 2B district, we have four allocations. So our third and fourth place athletes, who in some cases were only hundredths of a second out of second place, this year are at state. We are so proud of all of them and we are excited to see what they can accomplish.”

Chewelah will be sending a young team to Cheney. Only Baker and Ethan Rowe are seniors. There are no seniors among the Cougar girls, half of which are freshmen.

Kirry won the 100-meter hurdles, the 300-meter hurdles and the 200-meter sprint, and is the top contender to win state championships in all three events. She has already won state 1A championships in both hurdling races—one as a freshman and one as a sophomore—with the goal of standing at the top of the awards stand this year in each event. She is the prime contender for three first place medals going into this week’s championships.

Kirry won the 100-meter hurdles in 15.20 seconds, a second-and- a-half ahead of second place finisher Darby Soliday from Davenport. She is the state leader going into this week’s track and field finale with her personal-best time of 14.98 seconds at the Pasco Invitational. She has not been challenged since that day in April, but Elizabeth McMullen from Ilwaco is expected to give her a run for the gold at Cheney.

Kirry crossed the finish line first in the 300-meter hurdles in 46.72 seconds, nearly two seconds ahead of Soliday who was timed at 48.69 seconds. Kirry has run this distance in 45.96 seconds. Soliday has the second-best time in the state at 46.42 seconds.

In the 200-meter, Kirry outsprinted Ayden Krupke from Reardan down the final straightaway for the win. Her time was 26.75 seconds, while Krupke came in at 27.00 seconds. She ran her best time of 26.32 seconds at the league championship meet the previous week. Her top challengers at the state meet will be Lorin Cox from North Beach (26.48) and Fair Niven from St. George’s (26.66).

Baker launched the state’s third best shot put throw at Central Valley when he won the event with a personal-best distance of 47 feet, one inch. The throw was over a foot further than his previous best heave of 45 feet, 9 inches at the league meet. Steven Flowers from Lake Roosevelt is currently the state 2B leader with a distance of 49 feet, 10 inches, followed by Keith Olson from Napavine at 47 feet, 10 inches.

Baker then won the district discus title with a top toss of 142 feet, 8 inches, which is now the second-best throw in the state. The discus leader going into the state championships is Jeremiah Nubbe from Rainier at 156 feet, 0 inches.

Hartill also set a personal record in the shot put, placing second with a distance of 32 feet, 3 inches. Rose-Sheppard placed third with her personal-best throw of 30 feet, 10 inches.
Two-time state wrestling champion Kaden Krouse punched his ticket to the state meet with a third place throw measured at 43 feet, 11.75 inches. This was nearly three feet farther than his previous best throw of 41 feet, 1 inch.

On the blacktop, Chewelah’s 4×100-meter girls’ relay team placed second with the running of Kristen Erickson, Keelin Middlesworth, Maili Masuda, Mia Bellevue and Kirry passing the baton. Elle Carpenter has been a member of this relay team throughout the year. Masuda also qualified in the triple jump.

The Cougar boys’ 4×400-meter relay team will compete at the state meet after placing fourth with a time of 3:42.37. The team is made up of Wyatt Collins, Judah Katona, Ethan Rowe,and Krouse. Their time was four seconds faster than their prior best time for the season. Levi Miller has been a member of this relay team during the season. Rowe will also run the 1600-meter after running the metric mile in 4:47.03, which was 11 seconds faster than his previous best time.