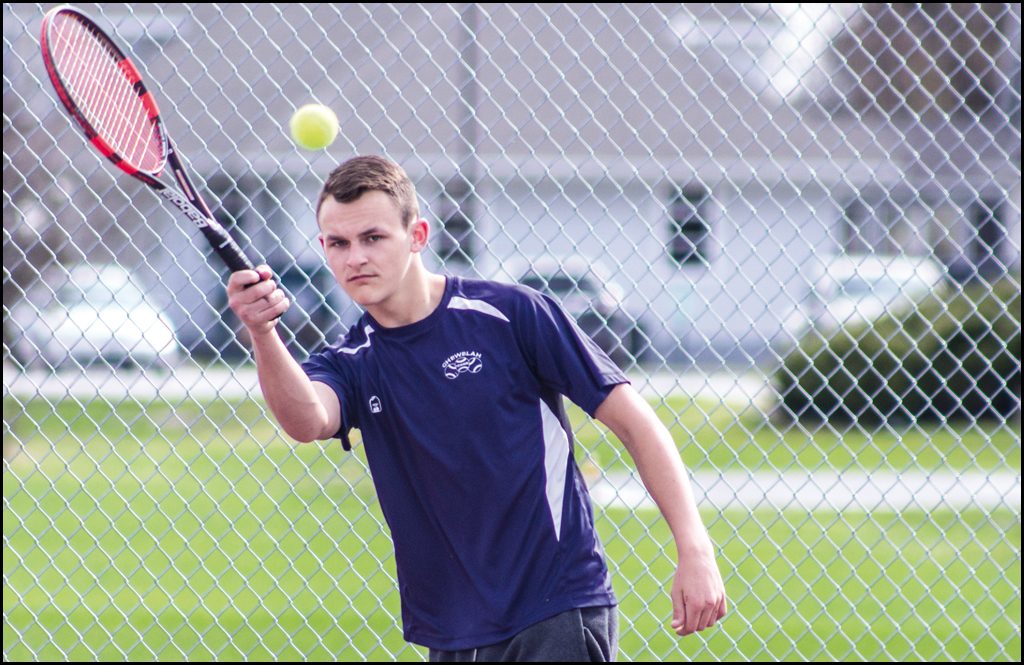 Joe Dreiszus and Keith Justice remain undefeated in doubles play for the Chewelah tennis team. As a whole, both the boys and girls teams are still undefeated. (Brandon Hansen photo)

CLAWS ARE OUT: Chewelah tennis continues to bull their way through league…

The Cougar tennis teams got in two league matches last week in spite of the rain, overpowering Reardan and Davenport in both the boys and girls divisions to remain undefeated this season.

Chewelah got its fourth sweep of the season last Friday against Reardan and remains undefeated in league play with six straight wins. Although the weather started out at 52 degrees and cloudy, after a half-hour warm up and one-and-a-half-hours of play, a downpour soaked the courts and the players to cause a delay. The Cougars waited 20 minutes and then squeegeed the courts for another 20 minutes before play resumed. They then won the remaining three matches in 15 minutes for the league victory.

Josh Grooms remained undefeated on the season at number one singles with a huge win over Andrew Alsept. He returned almost every shot with his half-swing and slow demeanor and made very few mistakes. Grooms got behind in the first set, but fought back to cause a 6-6 tie to force a tie breaker. He came from behind in that too for an 8-6 win.

“I told him between sets to use more slice, hit to the protected backhand more, and get to the net at the correct time so he wouldn’t get lobbed over so much,” said Coach Denise Smith. “Using these tactics and taking the ball out of the air to lessen the time his opponent had for each shot helped him win the second set 6-4.”

Juston Hyden and Ben Frizzell both got forfeits at singles positions and the rain caused their matches to get cancelled after they waited hours for a play back match.

Keith Justice and Joe Dreiszus also remained undefeated in number one doubles with 6-1 and 6-3 set wins.

“They got a bit too relaxed at many points in the match and didn’t play anywhere close to their ability level,” said Coach Smith, “but their natural talents and skill kept them ahead of the competition.”

Tim Kamm and Gage Smith hadn’t played a doubles match together in quite a while due to spring break and the rainy weather, but the two combined for a 6-3, 6-3 win with solid cross-court shots.

In girls court action, Hailey Crise got her first win at number one singles. She used solid ground strokes and a “get it done” attitude to take the match in straight sets, 6-1 and 6-3.

“I was proud of Hailey for stepping up in this role and really working hard and using determination, said Smith. “Sometimes it is easy to get psyched out in these situations, but Hailey took control of the match from the beginning.”

Jenny Kiefer also remained undefeated on the season with another convincing 6-0, 6-2 victory.

Coach Smith said, “Jenny is one of our smallest players, but she plays with such intensity and pride that she is fun to watch as she rolls over opponents who wonder how this tiny girl can hit the ball so hard and have such a consistent serve. She is relentless with her game and doesn’t get down.”

Natalie George played again at the number three singles spot, but her opponent forfeited during the rain delay citing a fall on the court as the reason.

“George is a freshman who has worked her way up the JV ladder and is the go-to substitute for the varsity,” Smith explained. “She has a hard serve and is picking up the game very fast. As soon as she believes in herself as much as I do, she will start becoming a great player.”

The doubles team of Breonna Martin and Ava Hartill won 8-4 while waiting and playing through the rain. Taylor Erickson and Madison Siegel may have looked pretty wet, but the smiles on their faces told you they were crushing the competition as they won 8-4 in a short match with consistent strokes and serves.

The Chewelah girls defeated the Lady Gorillas 5-1 earlier in the week, while the Cougar boys swept their Davenport counterparts 6-0.

With Karilee DesAutel away at lifeguard training, Hailey Crise was moved up to play the number one singles match against Davenport. Unfortunately, her veteran opponent was the coach’s daughter. Even though she played well in the second set she lost the match to the more experienced player. Jenny Kiefer played number two singles against Davenport’s lob queen, but stuck to her own style of play and won 6-1, 6-0.

Natalie George played her first varsity match of her life and received a forfeit, but she played an exhibition match against the Reardan number two singles player and had a record number of smashes in her 8-0 win. Breonna Martin and Ava Hartill defeated their inexperienced opponents 6-1, 6-2 with Martin burning shots down the alley on service return and Hartill playing steady tennis. Taylor Erickson and Madison Siegel smiled their way through an easy 6-0, 6-0 number two doubles match with deep returns and consistent serves.

In boys play, Josh Grooms defeated Tyler Groom 6-0, 6-0 with consistent forehand strokes and smashes to remain undefeated in league play at the number one singles position. Juston Hyden played impressively in a dominating number two singles win 6-0, 6-0 with lots of slices and low-flying serves that his opponent couldn’t handle. Ben Frizzell received a forfeit in the number three singles match, but he played Davenport’s number two singles player in an exhibition match and dominated 8-0 with a wide variety of extreme spin and extreme angle shots that frustrated his opponent.

In number one doubles play, Chewelah’s Keith Justice and Joe Dreiszus defeated Sweetland and Smith 6-0, 6-1 in a quick two-set match with lots of well-placed smashes and big serves which kept the points short. Tyler Dahl and Myles Krisik received a forfeit in the number two doubles match but played an exhibition match for fun against the Davenport number one doubles team.