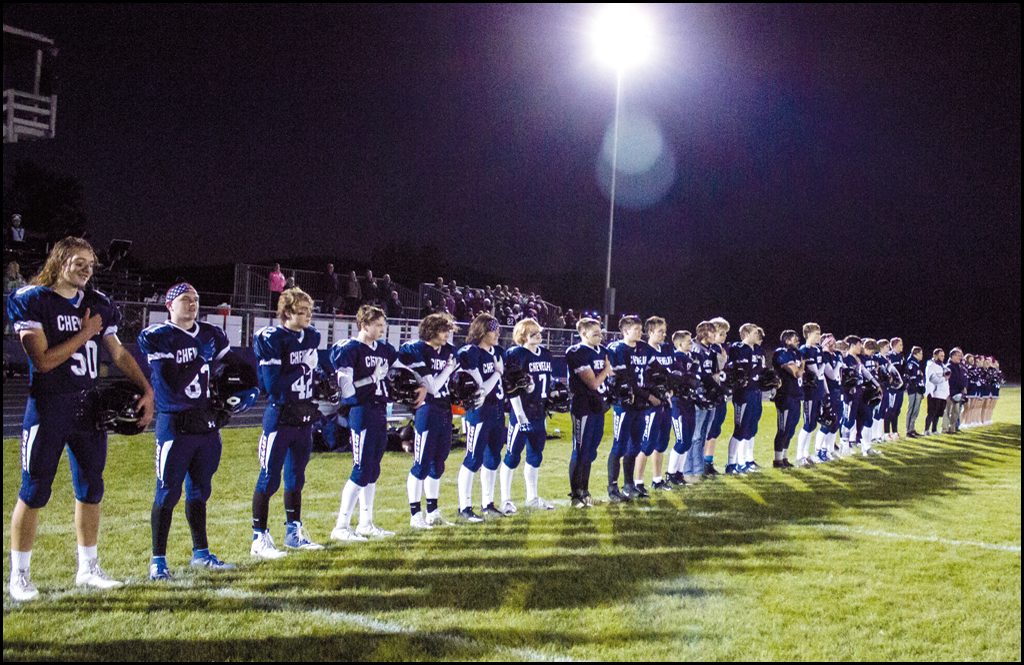 The Chewelah football team advanced to the State 2B quarterfinals for the second year in a row and had 11 players named All-League. (File photo)

CHEWELAH RECEIVES ACCOLADES: Cougars honored after another historic season in the 2B ranks…

One of the final indications of how good a football season turned out is by the number of your players opposing coaches name to the all-league team. This season, 11 Chewelah football players have been selected to fill 21 positions on this year’s Northeast 2B All-League Teams. Of those, six were chosen on both sides of the ball and three were named to a trio of positions. Congratulations, Cougars!

On the defensive end of the ball, the league selected linemen Shierloh, Davis, and Hofstetter’ linebackers Krouse, George, and Bowen Middlesworth; and defensive backs Baldwin and Franks.
The all-league special teams squad is made up of kicker Sam Triplett, punter Shierloh, and kick returner Franks.

Seniors
Jeanneret completed 146 passes for 2,324 yards and 23 touchdowns in his senior season, and he gained 449 yards from 96 carries. Last year as a junior, Jake completed 152 passes for 2,160 yards and 21 touchdowns and carried the ball 95 times for 467 yards. Over two seasons, he generated 5,400 yards of Cougar offense. You can put that in the Jenkins High School record book.

George was chosen as the tight end on the offensive unit where he was a valuable receiver and lead blocker. He had 22 carries for 85 yards rushing and caught 11 passes for 301 yards. But Jake was also a kingpin on the Cougar defensive front at outside linebacker where he hung up a sign that read “Road Closed”. He made 88 tackles, of which seven were for a loss of yardage, plus a sack, a pass interception, and tipped some passes in crucial third down situations.

Baldwin caught several passes this season, most of which were thrown by Jeanneret, but also some thrown by opposing quarterbacks. However, the exciting part came after he caught the ball when he showed off all his dance moves to avoid tacklers on his way toward the goal line. This guy can do the twist, the mashed potato, the swim, and the locomotion all at the same time. In all, he grabbed 40 passes totaling 479 yards. On defense at cornerback, Jaron had 25 tackles and three pass interceptions. He also was given all-league status as a kick returner. Shierloh became a stalwart on both the offensive and defensive sides of the ball this season, and it did not take him much time to do it. He was Jeanneret’s back-up quarterback last year, but made the change to the trenches this season at right tackle and nose guard. He finished the season with 51 tackles and three quarterback sacks. He was also the Chewelah punter.

Triplett made the all-league team as a kicker. The senior center was also the anchor of the Cougar offensive line and became an effective defender through the latter part of the season. He made 20 of 27 extra-point kicks after Cougar touchdowns. On defense, he made 40 tackles.

Juniors
Krouse was selected as a runningback and a linebacker. As such, he led the Cougar in both rushing yards and tackles. He carried the ball 128 times, gaining 687 yards and averaging 5.37 yards per carry.

He also caught 38 passes for another 625 yards. Altogether, he generated 1,312 net yards. Krouse again led the Cougar defense at middle linebacker with 150 tackles, of which six were for a loss of yards.

Franks was Chewelah’s leading receiver with 47 catches for 700 yards as Jeanneret’s favorite target at wide receiver. He averaged 14.89 yards per catch, with his longest grab being 67 yards. On defense the Cougar safety made 25 tackles and intercepted two passes. Franks was also chosen to the special teams squad as a kickoff returner.

Davis was named to the all-league team on both the offensive and defensive lines. He lined up between Triplett and Hofstetter on the left side of the Chewelah offensive front. On the other side of the ball, Davis led the Cougars in quarterback sacks with five and in tackles for a loss of yardage with eight. In all, he totaled 81 tackles for the season.

Hofstetter anchored the left side of the Cougar defense at outside linebacker where he made 53 tackles through the season, including two for a loss of yardage. He was credited with one quarterback sack. Hofstetter also made the all-league offensive team as a lineman at left tackle.

Sweat played in only nine games because of an injury, but he made an impression on opposing coaches who voted him to the all-league team as a member of the offensive line. Sweat started at right guard for the Cougars when he was healthy. He also took over as a right side linebacker on defense where he totaled 58 tackles.

Middlesworth was selected to the all-league team as a linebacker. He played the entire season at left side linebacker where he made 53 tackles that included one for a loss of yards and another as a quarterback sack. Middlesworth played slot receiver on offense for the Cougars where he caught nine passes totaling 217 yards.

Of the 11 Cougars selected for all-league honors, six are juniors and will return next fall as the team leaders for the new season. The weak area in next year’s Cougar roster will be the small class of four incoming juniors unless more decide to play in the fall. However, there were nine freshmen on the team, including five who enjoyed significant playing time and one who earned a starting role on defense. In addition, Cougar coaches expect to get a large crop from this year’s eighth grade class that had a winning season.