CHEWELAH BASEBALL PREVIEW: The boys of summer are back and they’re ready to set the 2B’s on fire 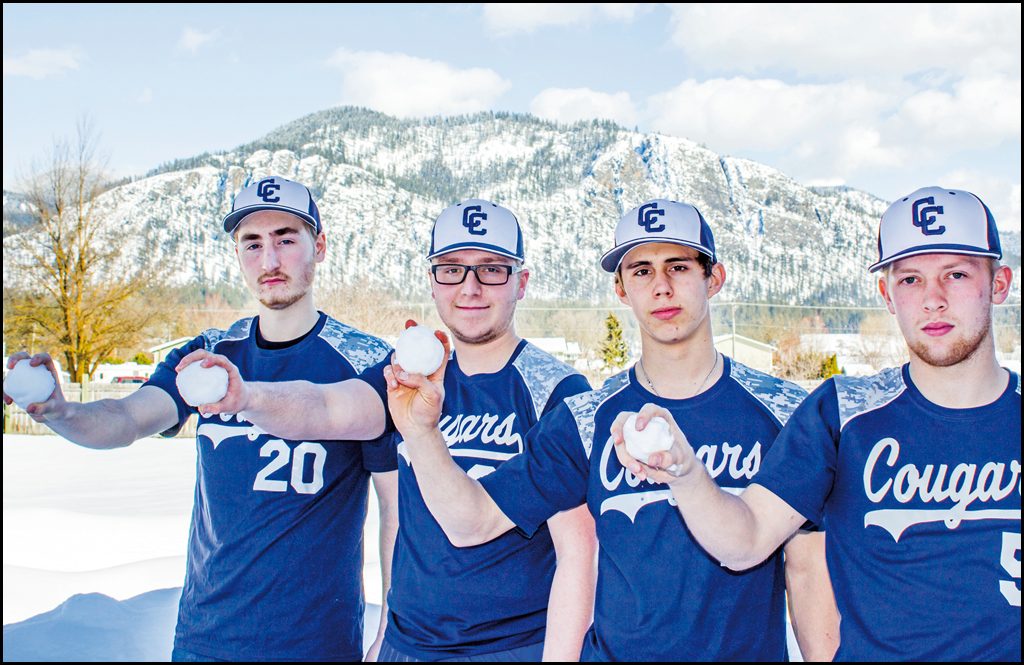 Justin Rollis, Zak Kubik, Carl Oman and Johnny Larson have been dealing with snowballs in this late spring season for the Chewelah Cougars. (Brandon Hansen photo)

It will not take long for the Chewelah Cougars to discover how competitive they are within the northern division of their new league. The defending division champion St. George’s Dragons will visit the Barbour Complex on March 29 for a doubleheader to open conference action. And, with the field still blanketed with a foot of snow, this may be the first home game of the season. Two nonleague games with Colville and Deer Park have already been cancelled, with games against Riverside, East Valley, Colville and Springdale in jeopardy this week because of field conditions.

Coach Sawyer Bardwell has had 22 ballplayers practicing in the middle school gym and at the Body Shop fitness center for the past two weeks, and early estimations indicate that the Cougars will be strong in all positions, but they have yet to be outdoors.

“This could be the best hitting team we’ve had since I’ve been here,” said Coach Bardwell, “but they still have not seen any live batting practice. We have been able to take cuts with a real ball, but we still have not faced live pitching. Right now, we are spending three days at the Body Shop and two days in the gym. We are doing what we can, including conditioning and lifting weights, but there is only so much we can do inside.” 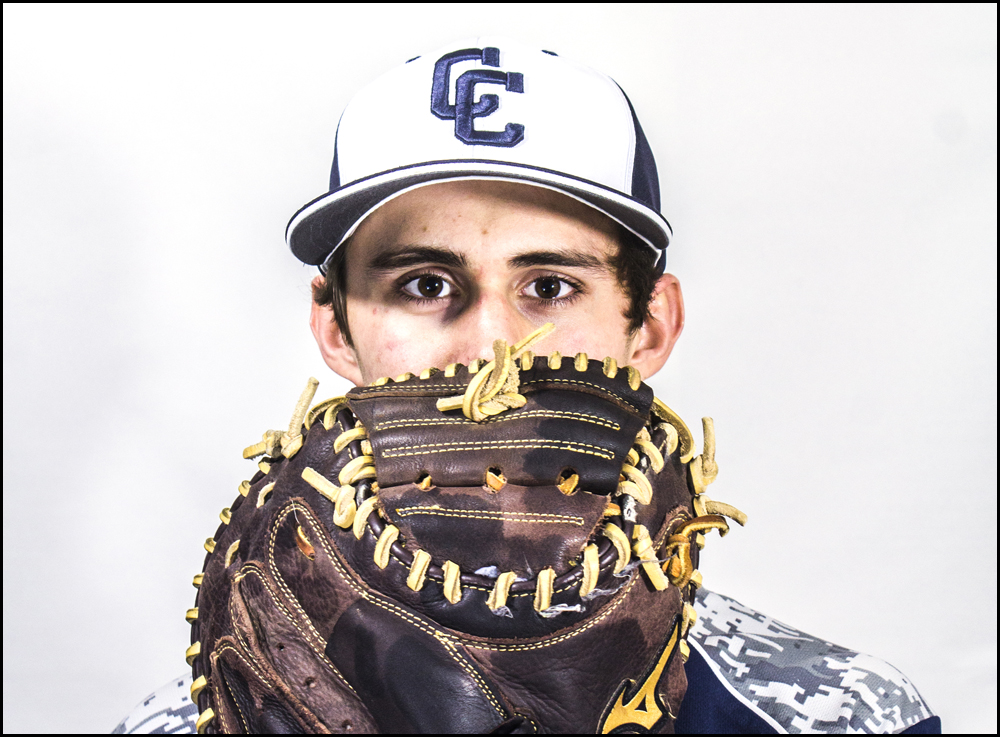 CARL OMAN is the kind of catcher everyone wants behind home plate for their team.

Bardwell plans to fill his varsity roster with 11 veteran players and assign the remaining 11 to the JV club coached by Ken Chartrey, whose team went undefeated last spring. There will be times when the JV team will not be playing on the same days that the varsity has games, so he will bring a couple of younger players up to the varsity squad to bolster his numbers.

Four all-league players return to the lineup. Justin Rollis with a 1.49 earned run average and Andrew Sweat at 2.30 will be back on the mound as Chewelah’s starting pitchers. The two combined to win eight games last season. All-state first baseman Zak Kubik and all-league catcher Carl Oman will also be back in uniform. Kubik hit .446 last year and Oman batted .355 as the leading Cougar hitters.

The infield will have Cole Davis at third base, Johnny Larson at shortstop, Luke Kubik at second base and Zak Kubik at first base. In the outfield, be Jake Jeanneret will be in leftfield and Jake George in centerfield, with rightfield still undecided, but Bowen Middlesworth and Nick Skok seem to be the leading candidates for that position.

Sammy Triplett, Jeanneret, Davis and Larson will be Chewelah’s relief pitchers, and maybe Oman and Luke Kubik will see some time on the bump if needed.

“St. George’s will again be the team to beat this year,” said Bardwell. “They have a solid lineup again this season. Kettle Falls seems to be the other strong team in the northern division, and Northwest Christian has its best pitcher returning. On the other hand, Wilbur-Creston had to cancel its baseball season because not enough players turned out. In the southern division, both Asotin and Colfax look like they will again be on top.

“We have a lot of veteran players. We just need to play up to our potential. But what we need most right now is to get out onto our field. We need to get outside as soon as we can. Hopefully, we will be getting some warmer weather. The first home game is against Colville was on March 22, but it has been cancelled. Springdale came in on March 26 but that was cancelled as well, and Friday’s St. George’s matchup on March 29 was moved into Spokane. All of our league games will be doubleheaders.”

By Monday last week , Bardwell could wait no longer. He had his players throwing out in eight inches of snow. 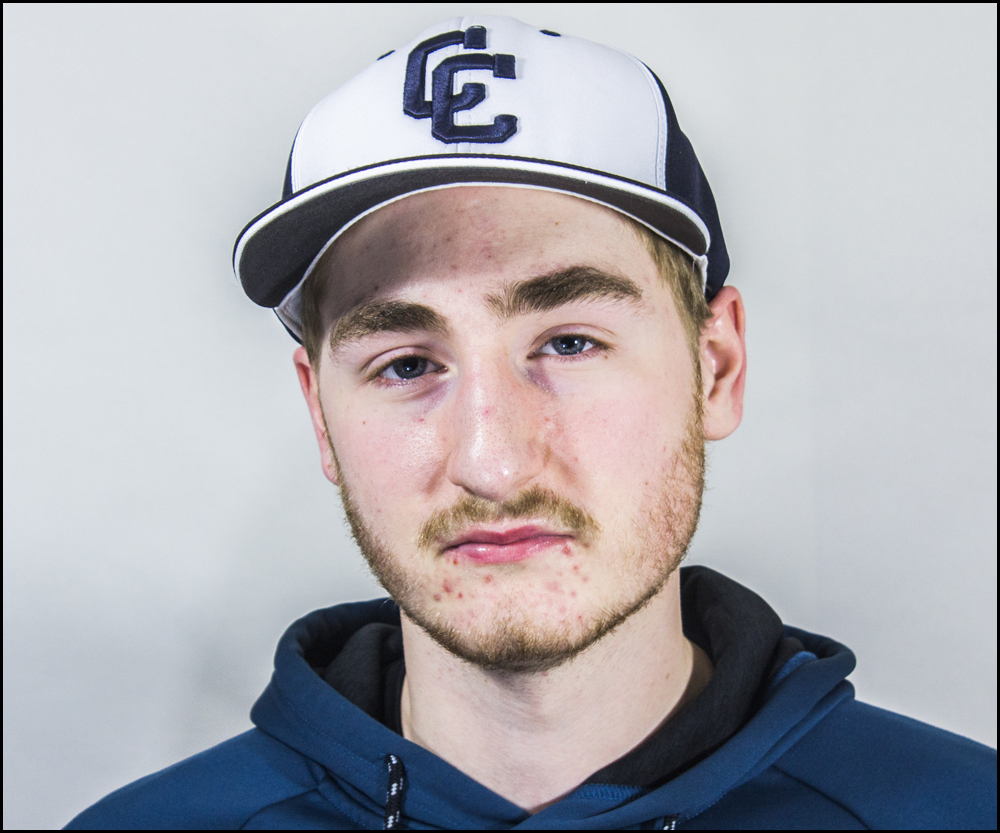 JUSTIN ROLLIS is part of a deep pitching rotation that the Seattle Mariners would be envious of.

No jersey numbers since the Cougars are getting new unis/numbers this year.