Chataqua part of the grind for many musicians 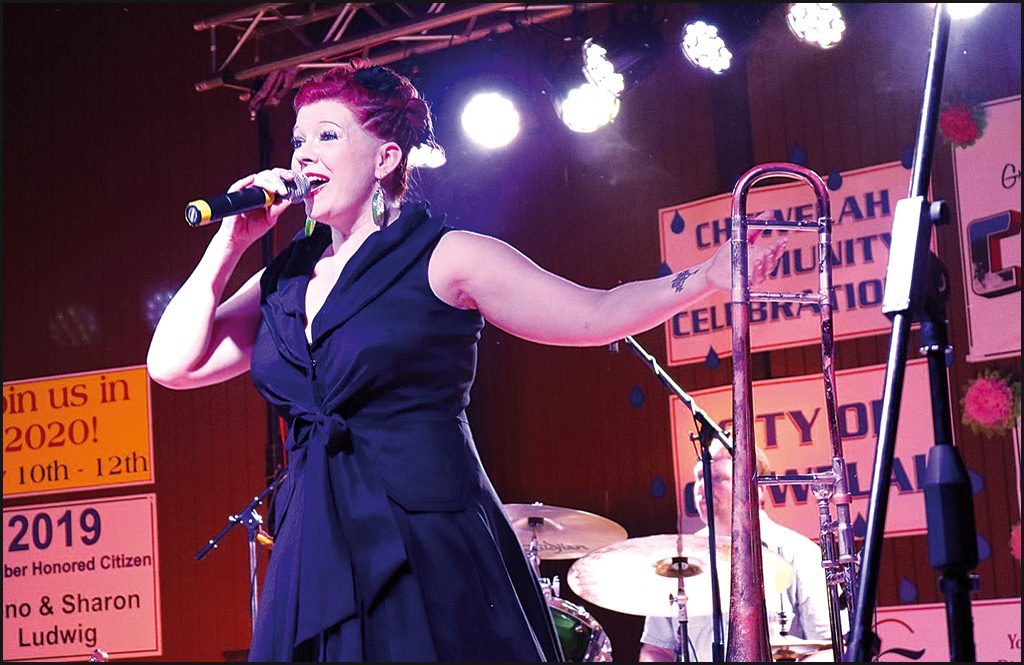 The Sara Brown Band has become a draw in Stevens County and beyond with Sara’s unique style and her band’s distinct act. (K.S. Brooks photo)

BEHIND THE MUSIC: Passion fuels area artists a lot more than the money…

The music is part of the attraction to Chataqua, with a wide variety of acts both locally and from out of the area. Some you might recognize, as these touring musicians will end up performing at other establishments, venues and festivals.

While the lights are bright, you might even find a new favorite band that you end up following on social media, but the truth still remains that most indie artists have to find alternative forms of income to supplement their musical aspirations.

“Most musicians have multiple jobs,” Sara Brown of the Sara Brown Band said. “The dream for many of us musicians is to be able to eventually cover all of our financial needs by making music.”
Chewelah musician Craig McQuain is under no ideas of grandeur when it comes to making money for music. He picks and chooses his gigs as it matches up with the rest of his family life.
“I am lucky to be able to pick and choose,” McQuain said. “If it was my only source of income, I would be on the street every day looking for more gigs.”

Income can vary for musicians who get paid to perform. A variety of factors, including the number of band members, the size of the venue and how much the owner is willing to pay.

“To get paid, a musician must find a venue that needs talent to draw in customers,” McQuain said. “The business owners need to make money when you play. If they don’t you’re not going to keep the gig.”

Chataqua has a budget to pay the evening headliners to come in, but it’s obviously a different financial scale than say someone performing at the Knitting Factory or Spokane Arena.

“There are many different venues to play for and many different businesses in need of entertainment,” Brown said. “It is important to figure out your time invested in your performance, what gear is needed or you will be providing, your gas, food and your experience level.”

Fame can be a bit misleading for musicians on social media as well. A large number of followers doesn’t mean money and money is what pays the rent.

“I don’t really understand how any musician can afford to stay in one place,” indie veteran singer-songwriter Cass McCombs told Vulture magazine earlier this year. “We don’t make enough money to afford an apartment. I know pretty much half of the musicians in existence have a side job of some sort.”

Throw in that music requires equipment – and a lot of it – along with a van or bus for touring, along with the income being split up between a group of people.

“Costs include instruments, cables, speakers, mics, gig trailers, licenses (required to play for certain gigs) and more are just a few of the things we have to maintain and hold up to a level of excellence,” Brown said. “Food and lodging are also expensive and must be considered and planned for properly.”

For Chataqua, headliners are getting a fair market value for festivals of that size. For mid-level musicians with some degree of fame who are on tour and may have a following and be able to play in larger venues, the payout still isn’t great and could equal $1,000 per musician. While that sounds great, indie musicians may be able to perform 25 times a year and it’s not always at a high-paying venue.

When a backup musician plays for a more famous musician, the pay can still be less than great since the crowd isn’t there to see the backup musician but rather the star. Market size can also be an issue. Spokane is obviously a bigger market for places to play, but that isn’t always a good thing.

“Spokane is hard,” McQuain said. “Lots of bands are willing to play for free. Venues tend to take advantage of this. Cover bands get paid and original music bands play for free or for the door.
Which is barely anything after it gets split between the bands.”

Supply and demand doesn’t necessarily match up and while there are more gigs to play in a bigger city, it’s not necessarily more lucrative.

“An example of this is the Whiskey A Go Go in Hollywood,” McQuain said. “They don’t pay because they figure you as a band are getting exposed to a potential audience that could be record executives.”

The world of record deals and music labels is a completely different world than perhaps the bands you see touring around a great number of festivals and places. That is also when the music can seem more like a job than a passion. For those still doing the long trips, the small venues and the small paychecks, it’s still a labor of love.

“I believe wholeheartedly that musicians should be willing to put in hours and hours of time (consistently) learning new material, writing, researching, challenging themselves and cultivating their art,” Brown said.