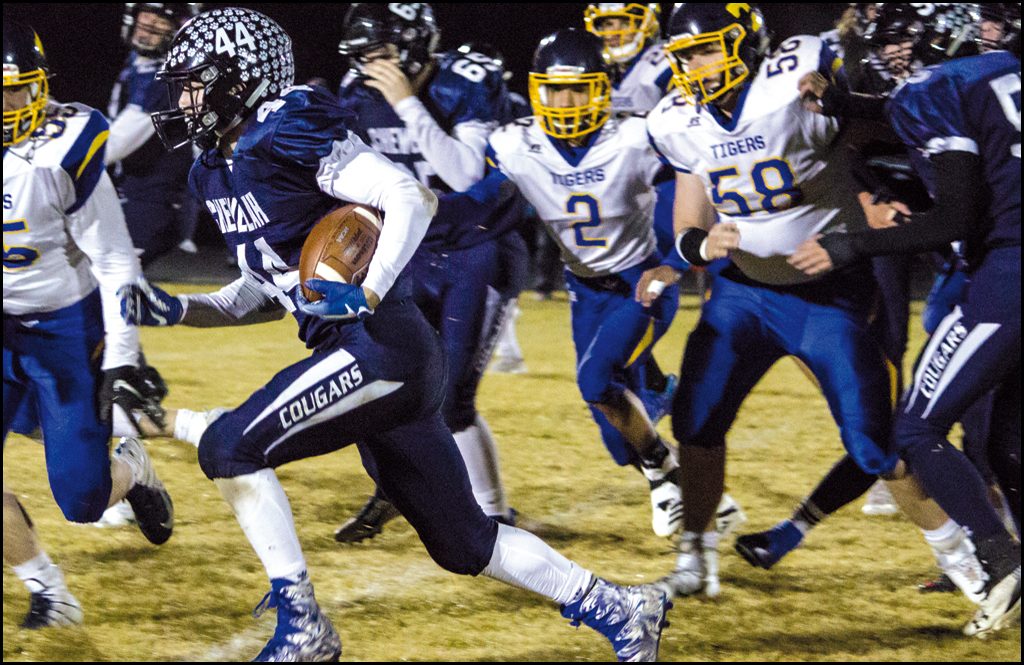 BOOMING BACK TO THE QUARTERFINALS: Chewelah muscles Tonasket 36-7 to advance to the State 2B Quarterfinals for the second year in a row…

Kaden Krouse gained 196 yards and scored twice while a downright brutal Chewelah defense barricaded all entrances to the endzone last Friday night when the Cougars defeated the visiting Tonasket Tigers 36-7 in the opening round of the 2019 2B Gridiron Classic Football Tournament.

The fourth-ranked Cougars will now face the fifth-ranked Adna Pirates this Saturday, November 23 at 1 p.m. at Gonzaga Prep in Spokane in the state quarterfinals.

“This is going to be a dogfight,” predicted Coach Cameron Gump. “Adna is a lot like us. They run a lot of the same plays that we do. They run and throw the ball with equal ability. So, we have to be physical like we were against Tonasket, and we have to play with the same intensity. There is no doubt that both teams are going to put points on the scoreboard. The winner will be the one that wants it more.” END_OF_DOCUMENT_TOKEN_TO_BE_REPLACED 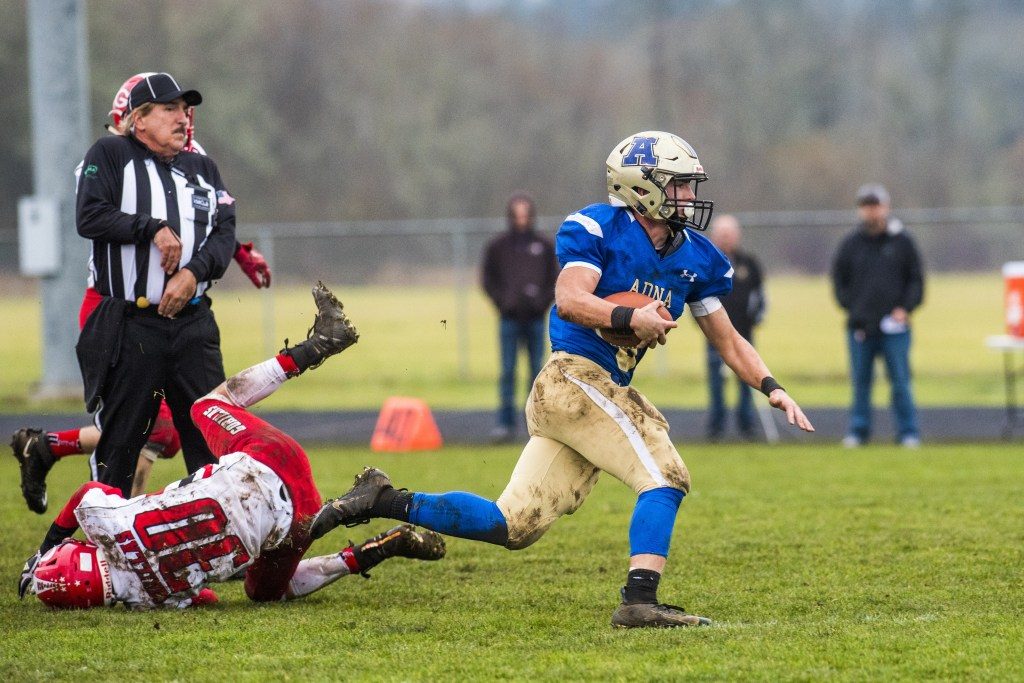 Adna’s Cole Fay runs the ball on Saturday during a State 2B football game in Adna.

The third-place team in a five-team league traditionally finds itself in tight situations when the postseason rolls around.

For Adna, though, the first two weeks of the playoffs have felt more like a cool-down lap.

The Pirates, the No. 3 team in the SWW 2B League Mountain Division, followed up a 54-14 crossover dismantling of Ocosta with a 51-7 win over Davenport last Saturday afternoon to advance to the State 2B quarterfinals.

“It’s been nice. We played such a tough division and schedule anyway, and we play that for a reason,” Adna Coach K.C. Johnson said. “We know we might get beat early in some games, but look at Toledo (which beat No. 7 Colfax) today. You play in this league, in this division, and it makes a difference.” END_OF_DOCUMENT_TOKEN_TO_BE_REPLACED 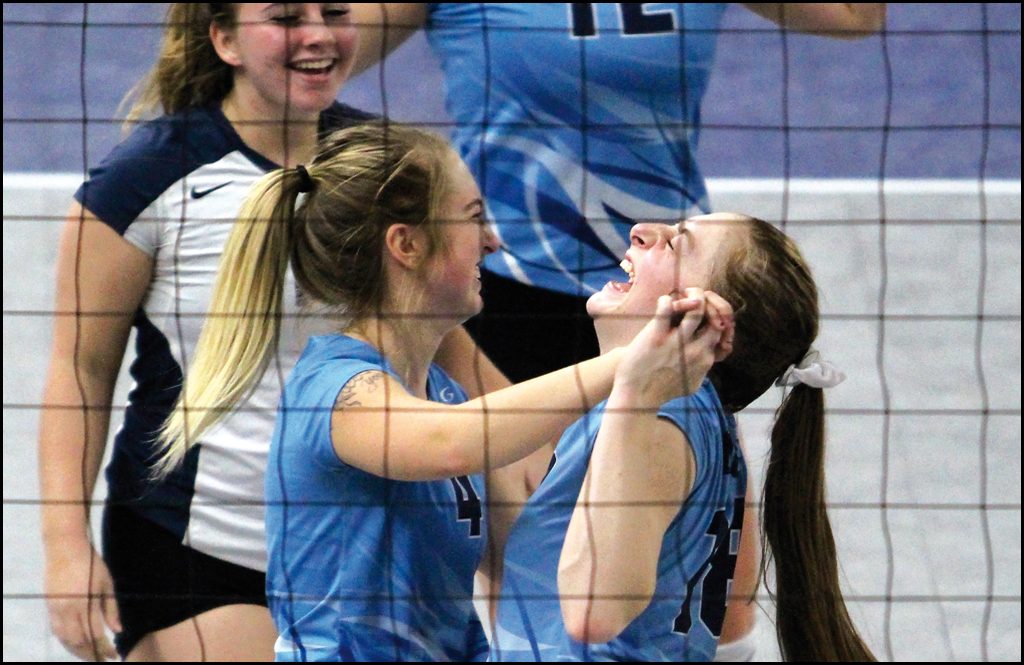 Jesse Macrae, Elle Carpenter and Lily Kirry celebrate a point by the Cougars during the State 2B Tournament. (Roger Harnack/Cheney Free Press photos)

IMPRESSIVE CAMPAIGN: You have to hand it to the Lady Cougars, they had one heck of a season in 2019…

A Cinderella season came to an end in Yakima last week for the Lady Cougars. That is the place where the Cougars were determined to finalize their volleyball campaign, and the Chewelah gals made their wish come true by being one of the sixteen teams from throughout the state that got to compete in the 2019 Washington State 2B Volleyball Tournament. And, furthermore, they proved they belonged there by defeating Lake Roosevelt on the opening day of the event.

Although the Cougars lacked the height of all their opponents during the season, Coach Kaya Landers developed their skill levels as a team and as individual players so they could compete with the taller teams.

During a home match against Lind-Ritzville a couple of weeks ago when the Lady Broncos came off the floor, one of their taller players was noticeably frustrated.

“How can those little small girls jump so high and hit the ball so hard?” she asked her teammates. “They are only this tall,” she continued, raising her hand to chest level.
END_OF_DOCUMENT_TOKEN_TO_BE_REPLACED 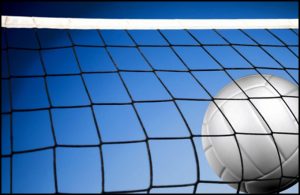 1B FOOTBALL PLAYOFFS: Selkirk racks up 600 yards of offense in 56-20 win over Pomeroy 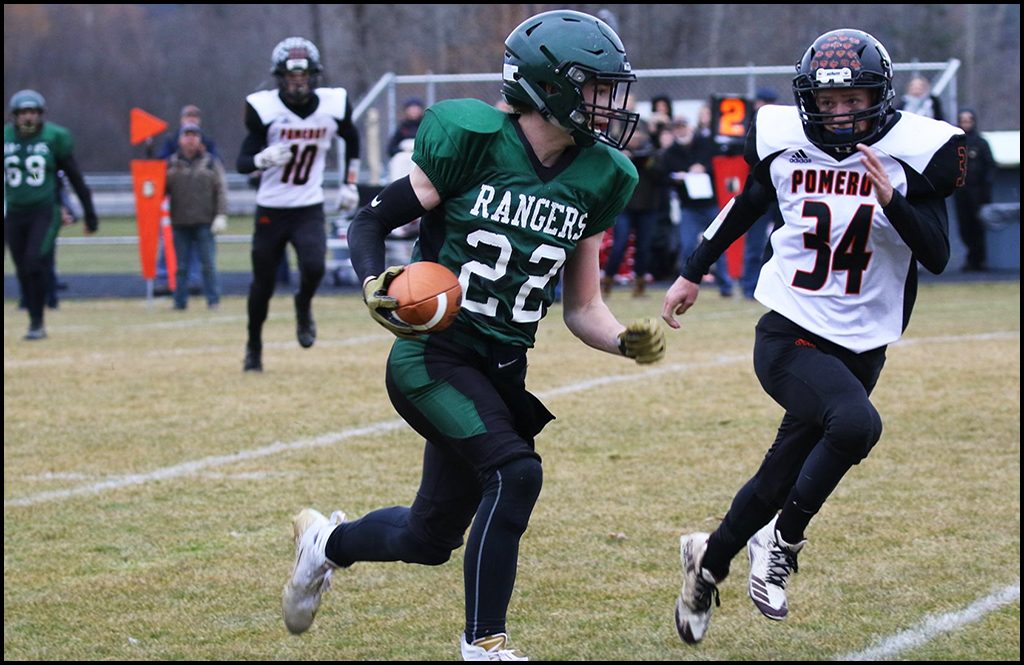 The game scoring started with a three-yard touchdown pass from Link to Davis, before Pomeroy answered back. The Rangers’ Aiden Penney punched it in from four-yards out to make it 16-6 after on quarter. END_OF_DOCUMENT_TOKEN_TO_BE_REPLACED 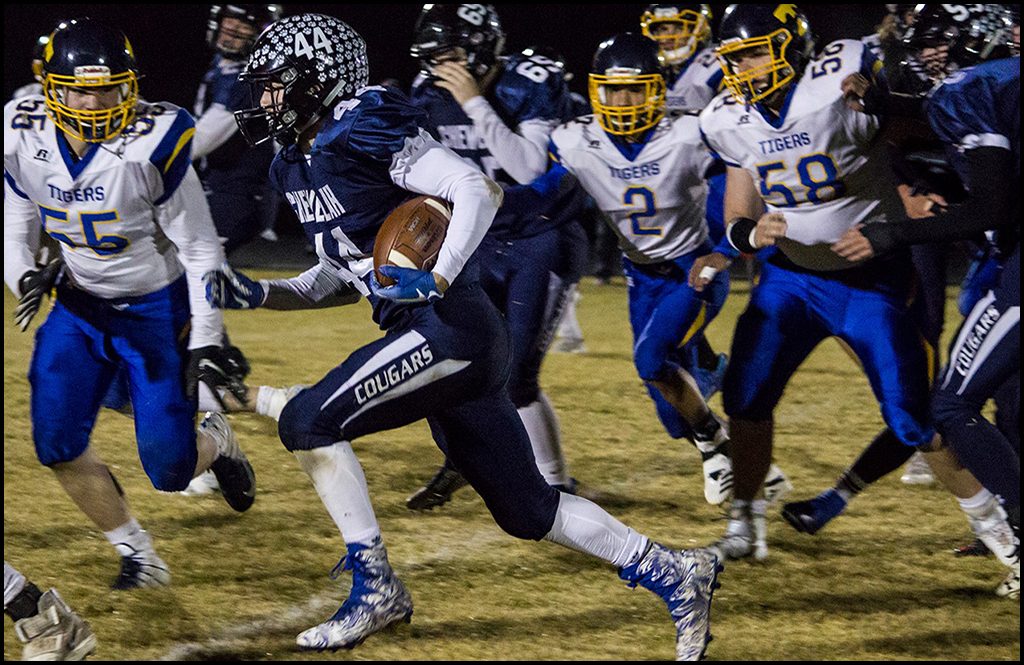 Cougars reach final 8 for second year in a row..

Chewelah has been here before, they just took a slightly different route this season.

The trip to the State 2B Quarterfinals this year was peppered with a dose of doubt about the Cougars after an 0-3 start, but the guys that started the season extended it on Friday night with a punishing defensive performance and seemingly everybody coming up big in their own way for the Chewelah. Now at 7-4, the No. 4 seeded Cougars will play No. 5-seeded Adna in the state quarterfinals next week.

Chewelah fans watching on Friday night probably were conflicted with their reactions. END_OF_DOCUMENT_TOKEN_TO_BE_REPLACED 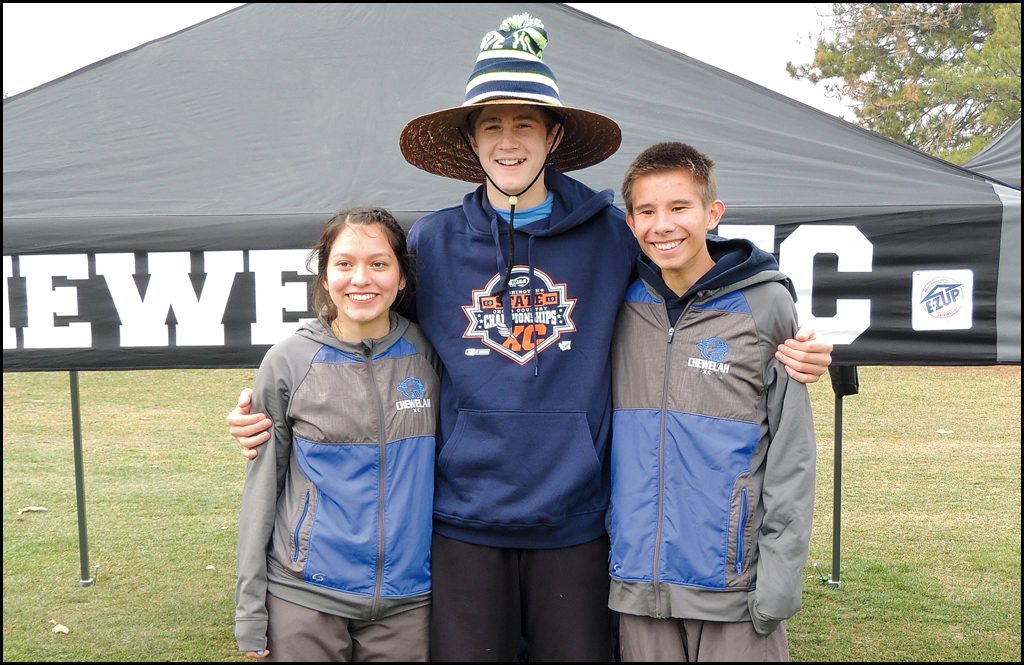 Zeke Crockett ran his career-best time and Cole Foster ran under 18 minutes for only the second time as a rookie freshman, to showcase a bright future for Cougar cross country at the State 2B Cross Country Championships in Pasco. Crockett ran the 5000-meter course at Sun Willows in 17 minutes, 42 seconds, placing 47th overall as a sophomore. Foster toured the course in 17 minutes, 59 seconds, finishing 64th among the 154 runners in the race. It was the first appearance at the state finale for both young Cougar runners.

“I thought they did as well as they could have,” Coach Ed Anegon said. “To have two run sub-18s as underclassmen is stellar at this point and bodes well for the future of the boys program.”

“Zeke PR’d on the Sun Willows course, a course that is a much tougher go than the course they saw at Chewelah last weekend. Cole came away a bit disappointed in his race as he didn’t look or feel all that good throughout much of it, but he pushed through and still managed to run just under the 18 minute mark, a remarkable performance for a freshman. He may be one of the best freshman Chewelah has seen in quite some time.” END_OF_DOCUMENT_TOKEN_TO_BE_REPLACED 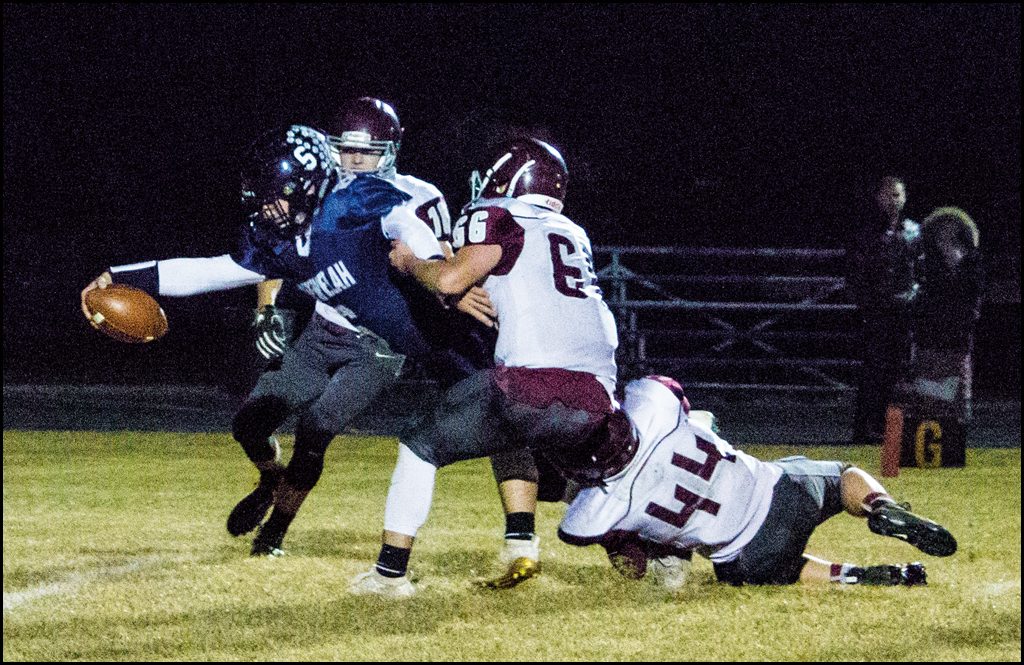 Jake Jeanneret reaches out for the goaline to score against Reardan. Chewelah won their district crossover 36-23 (Brandon Hansen photo)

Cougars down Reardan 36-23 in rematch…

It was three weeks before the traditional eating of the Thanksgiving turkey, but Chewelah got to break the wishbone early. The Reardan wishbone, that is.

On a chilly fall night at Snyder Field, the Cougars used a balanced running and passing attack to defeat the visiting Indians 36-23 in crossover play with the winner earning a ticket to the State 2B Football Championships. Chewelah will host the Tonasket Tigers at Snyder Field on Friday night, November 15, with kickoff time set at 6 p.m.

The Cougars went from being ignored by the football polls to being seeded fourth into the 16-team state bracket. They had never been ranked in the Seattle Times, the MaxPreps or the Associated Press top ten. However, the WIAA 2B bracket seeding committee gave Chewelah the best seed from the eastern side of the state behind westsiders Onalaska, Napavine, and Kalama. Tonasket entered the bracket as the 13th-ranked team.

“We’re all pretty excited,” said Coach Cameron Gump. “We got a good seed into the tournament. The seed means nothing. Now, we have to prove that we deserved it. Some teams on the west side may be upset with our seeding, but there is no doubt that we are the best team from this side of the state. How we do from here on out will depend on how much effort we put in. We have to stay disciplined and keep rolling. END_OF_DOCUMENT_TOKEN_TO_BE_REPLACED 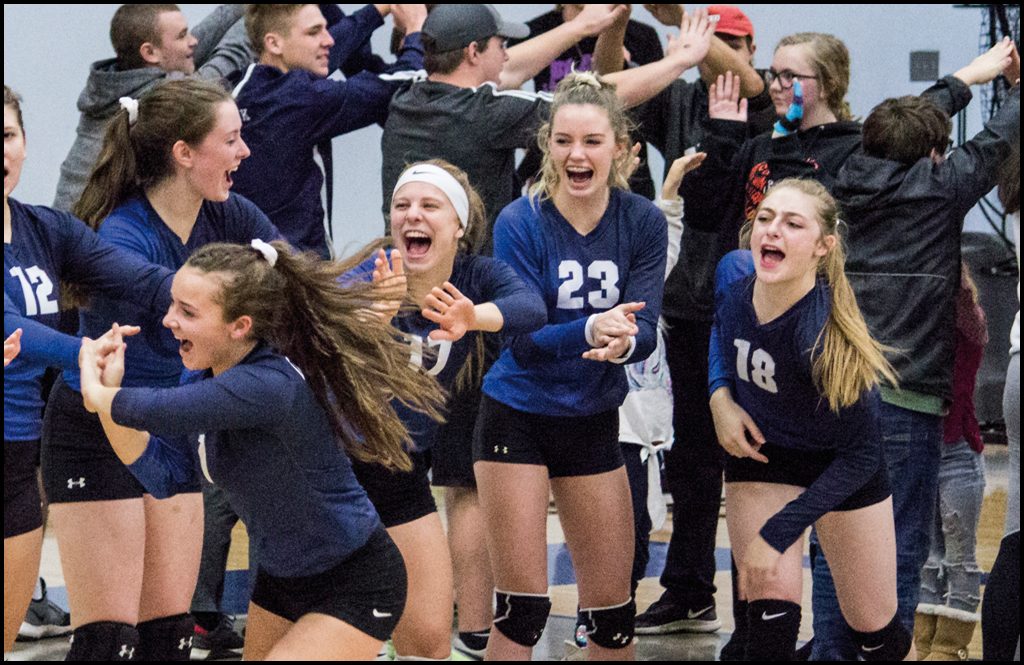 Chewelah volleyball gets pumped for the district playoffs.

The day Chewelah volleyball coach Kaya Landers took the job, her family made hotel reservations in Yakima for the state tournament.

Now, the Chewelah’s Lady Cougars will be competing in the State 2B Volleyball Tournament at the SunDome in Yakima, beginning this morning, November 14, and continuing until a state champion team is crowned on Saturday afternoon. The Cougars won two of their three matches at last Saturday’s District 7 2B Tournament at Liberty High School and will now face Tri-Cities Prep in the opening round of the 16-team state championships. They will play again this afternoon against either Lake Roosevelt or Kalama.

“We were all really excited to punch our ticket to state, but honestly, we had set that intention from the very beginning so I very much expected to be getting a berth,” Landers said. “I think it’s important to have more than a goal but to have an expectation and an intentional action plan to do what you set out to do.” END_OF_DOCUMENT_TOKEN_TO_BE_REPLACED 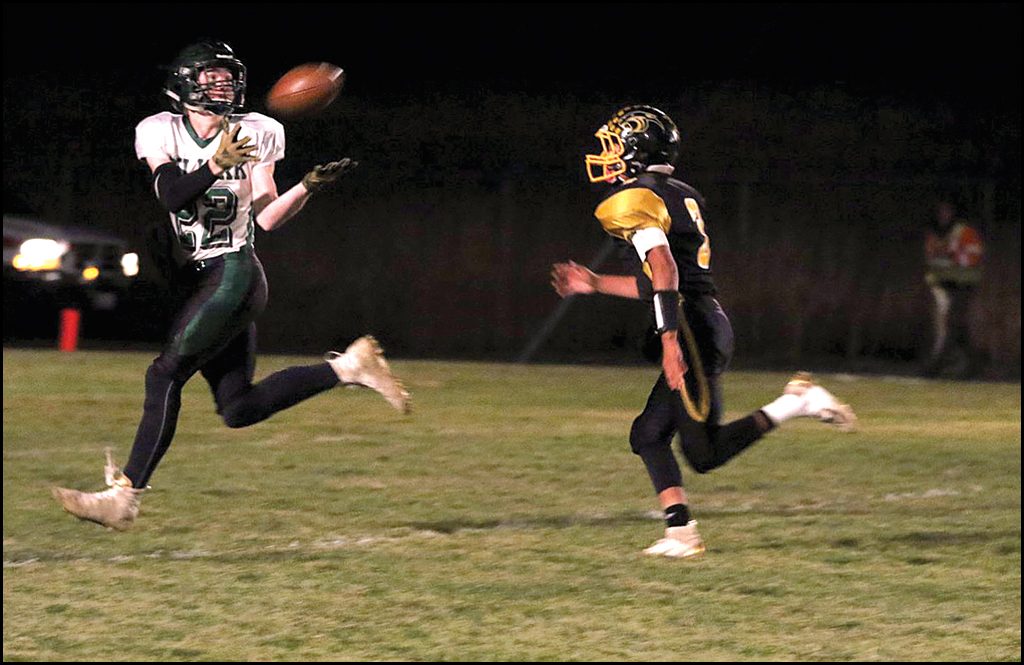 Zech Curran hauls in a pass from Jay Link in Selkirk’s big win over Cusick for the NE 1B North title. (KS Brooks photo)

Last Friday was a historic night for the Selkirk Rangers. Their 62-20 win over Cusick was the eight-man program’s first win over the Panthers, and it just so happened to clinch its first ever NE 1B North title.

At 7-0 in league and 7-1 overall, Selkirk has one more game against winless Curlew and will then be at the mercy of the WIAA seeding committee as to whether they host or travel for a 1B playoff game.

“It’s an awesome feeling winning a league title after what we have been doing as a team through the years,” Selkirk Coach Jeremy Link said. “I am super proud of the kids they worked really hard to get to this point.” END_OF_DOCUMENT_TOKEN_TO_BE_REPLACED