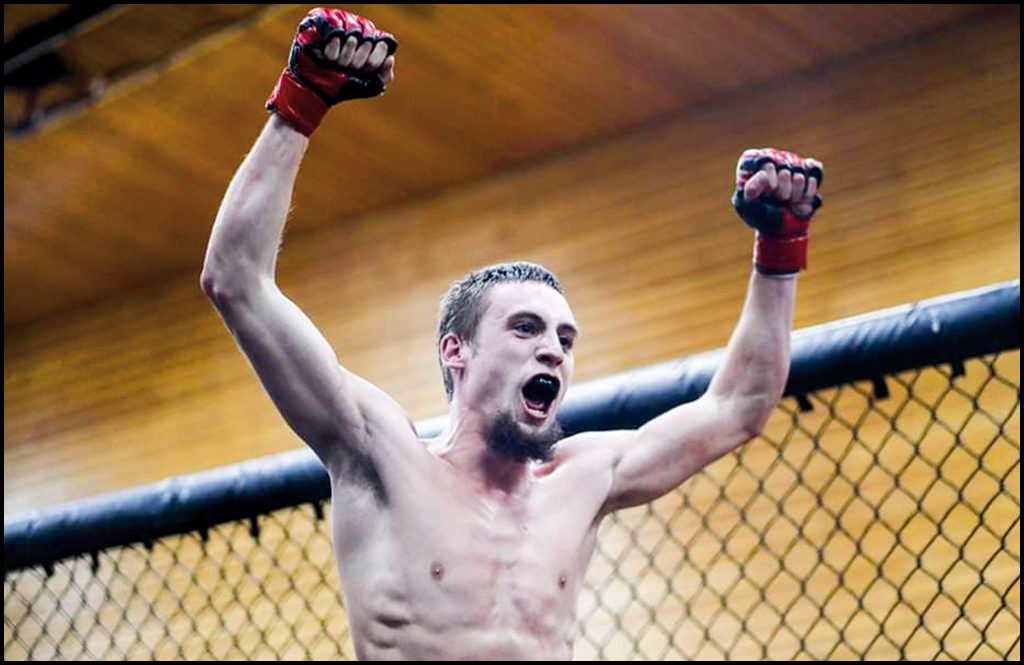 Trustin Taft has become the latest MMA champion to come out of the town. At this month’s The Beatdown at the West Central Community Center, Taft defeated previously undefeated Tyler Walker for the 125-pound championship. He improved his record to 3-1 and is the new Flyweight Champion for The Beatdown’s promotion company.

Taft won by arm triangle choke and will now have the opportunity to fight for another title in the Proving Grounds Promotion in a few months.

“His strengths are his toughness and iron will,” Chewelah Juu Jitsu instructor Kris Rancourt said. “Trustin has been training for about a year with me and is becoming well-rounded.” END_OF_DOCUMENT_TOKEN_TO_BE_REPLACED 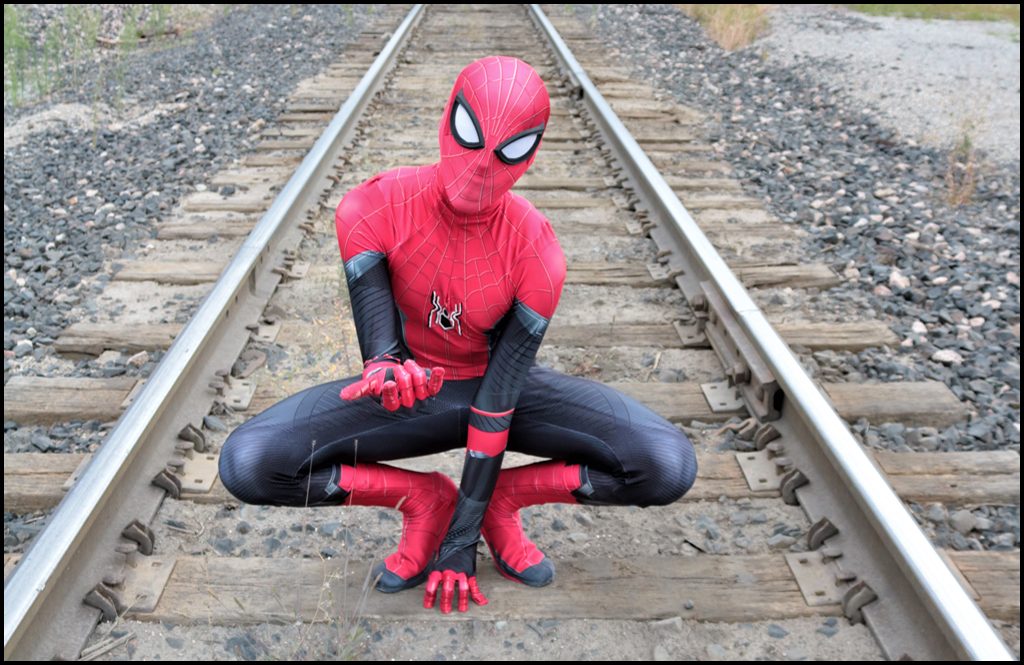 Spiderman can appear at a birthday party near you as Colville teen Shawmus Sargent has started Cosmic Characters. (KS Brooks/Silverado Express photo)

While he hasn’t been bit by a radioactive spider … yet… Colville student Shawmus Sargent has a superpower: the ability to bring superheroes to Stevens County.

After seeing how some businesses offer a superhero visit for a few hundred dollars, Shawmus thought he could provide the same service for the kids of Stevens County at a much more affordable rate.

“I grew up in Inchelium and my family has been poor and wouldn’t have been able to afford something like this,” Sargent said.

Sargent started Cosmic Characters last April and has been available for parties at a lower rate between 25-30 dollars an appearance. END_OF_DOCUMENT_TOKEN_TO_BE_REPLACED

GIRLS BASKETBALL: Chewelah turns its attention to the south 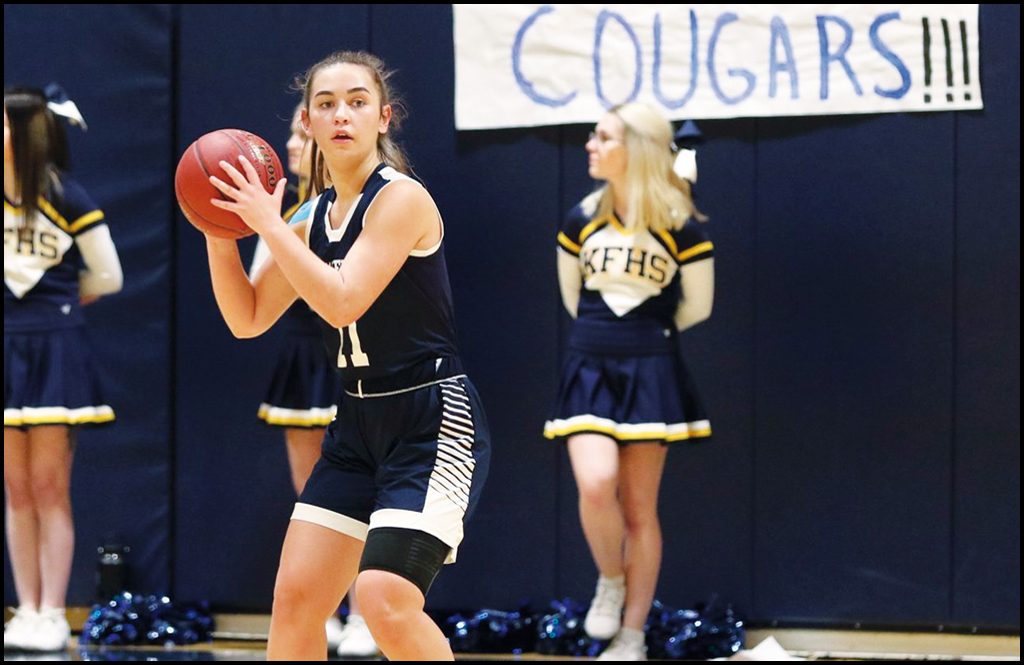 POSTSEASON LOOMS: Lady Cougs will play in opening round of district tournament on Feb. 10 against Reardan…

Although Chewelah’s Lady Cougars went into last week’s final league game with a 1-8 record, they have earned an entry into this year’s district tournament. The Cougars will meet the Lady Indians from Reardan in the opening round of the tournament on Monday, Feb. 10 at 8 p.m. The Indians are the fourth-seeded team from the southern division of the league and will take a 6-5 record into the tournament.

This Friday at 6 p.m., Chewelah could end their regular season with a win. They host Wilbur-Creston, which is the only team Chewelah outscored this season. The Cougars defeated the Wildcats 54-41 in their first meeting and hope to bag their second win this Friday.

Over last weekend, the Lady Cougars lost 46-29 at Kettle Falls and returned home to endure a 58-41 loss to St. George’s. They stayed with the Bulldogs through the first half and held a 19-18 lead early in the third period before Kettle Falls pulled away late in the game for the win. Against St. George’s on Saturday, the Lady Cougars were outscored 22-4 in the second period on their way to a 58-41 loss. END_OF_DOCUMENT_TOKEN_TO_BE_REPLACED 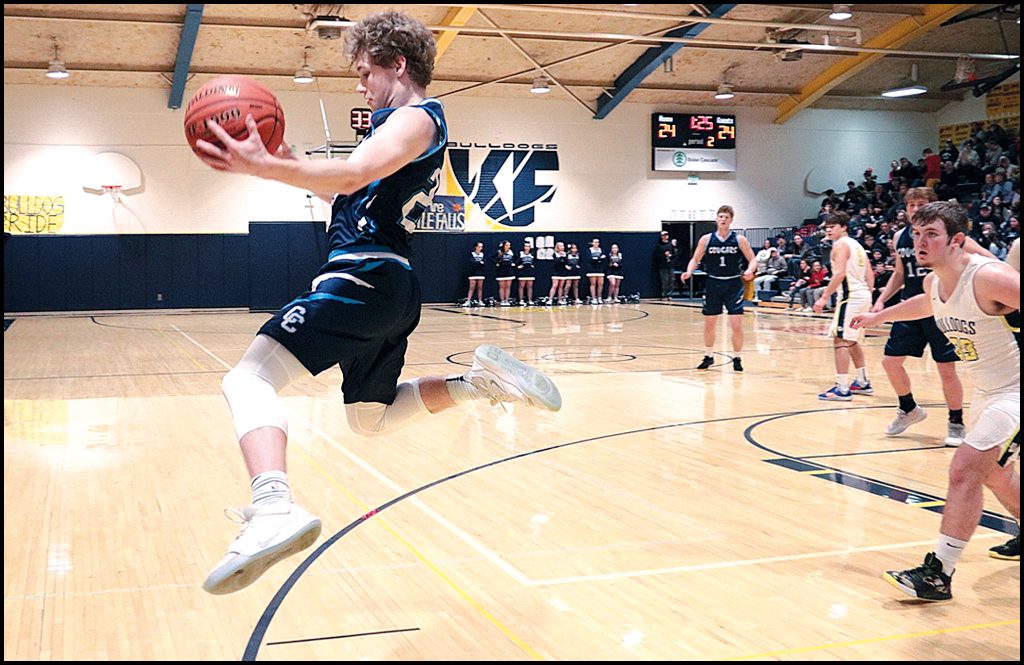 Chewelah’s Jaron Baldwin snags the ball while in the air during league play against the Kettle Falls Bulldogs. (KS Brooks photo)

Chewelah watched its 10-point third period lead flip into a five-point deficit by the end of the game on Friday night at Kettle Falls as the homestanding Bulldogs solidified their grip on second place in the northern division standings with a 64-59 win. The Cougars scored the first 10 points of the third period and led 38-28, but the Bulldogs caught up by the end of the period and fought off a final Cougar rally to savor the league victory.

This was a game Chewelah had to win to remain in contention for a second place finish in the final league standings. The loss, coupled with Saturday evening’s 73-52 shortfall against St. George’s, plunged the Cougars into fourth place. They have now lost three consecutive league encounters, beginning with the previous week’s unexpected 63-59 deficit against Davenport.

Second-ranked St. George’s stands alone at the top of the northern division standings with a 9-0 league record. Kettle Falls holds onto second place with a 6-3 record. Davenport, which now sits in third place with a 5-3 conference record, still has to face Kettle Falls and St. George’s this weekend. The three straight losses tumbled Chewelah into fourth place with a 4-5 record with one game remaining on the schedule. END_OF_DOCUMENT_TOKEN_TO_BE_REPLACED

Congresswoman Cathy McMorris Rodgers responds to State of the Union

Here is video of Congresswoman Cathy McMorris Rodgers, who released this following statement via Facebook Live after President Donald J. Trump delivered his State of the Union Address to a joint session of Congress on Tuesday evening…

Here are some historical events that happened on this day, February 2, in history…

END_OF_DOCUMENT_TOKEN_TO_BE_REPLACED 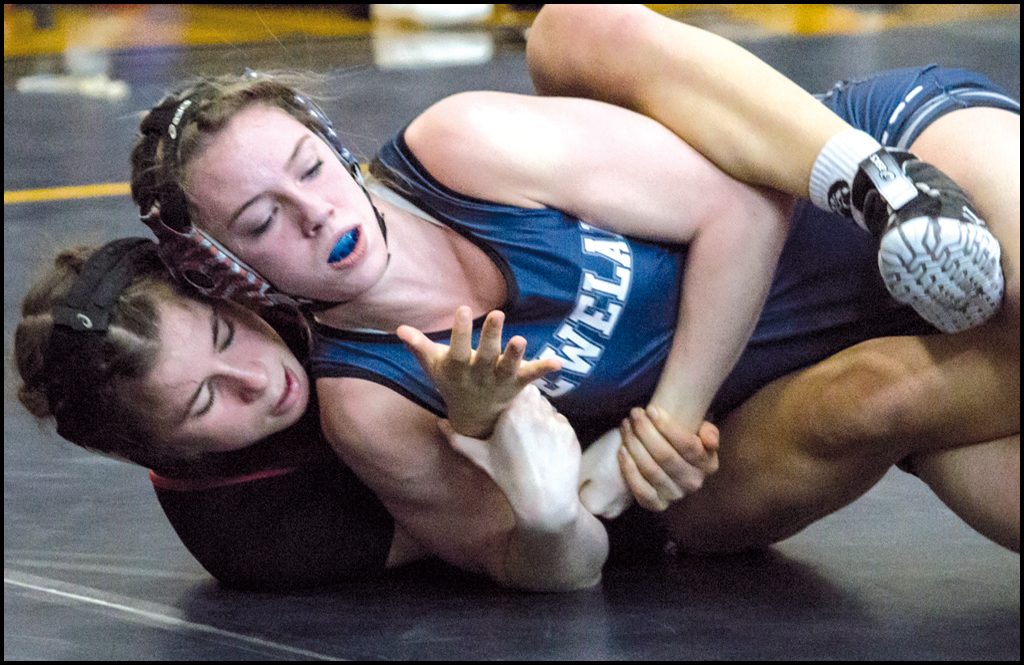 Postseason begins for wrestlers on Thursday…

“We will have an eight-man bracket format for this tournament,” said Coach Kim Hogan, “but only a couple of the brackets will be full. Some of the brackets will have only three or four wrestlers in them. In all, we expect to have between 50 and 60 matches wrestled here on Thursday night, beginning at 4:00. They will be fought on two mats, so they will go fast.”

Wrestlers were seeded into their respective weight brackets after the league meet at Kettle Falls on Saturday. The results of this meet and the results from an earlier league meet at Wilbur were used to seed the brackets. Three Cougars were seeded first into Thursday’s tournament without having to wrestle at Kettle Falls. They were Justyce Acosta, Jake Jeanneret, and Cole Davis.
END_OF_DOCUMENT_TOKEN_TO_BE_REPLACED

A proposed cap and trade program is under consideration in the senate as lawmakers continue to explore ways to meet the state’s greenhouse gas reduction goals.

Senate Bill 5981, with Sen. Reuven Carlyle, D-Queen Anne, as its primary sponsor,  would put a limit on the amount of greenhouse gases certain industrial facilities and practices could produce.

Companies would then bid for their projected portion of produced emissions through an auction process. The total amount of emissions allowed will decline each year to achieve the state’s emission reduction goals. Under the bill, emissions in the state must reach targets set in previous legislation, which means they must decline to 25% below 1990 levels by 2025 and by 50% below 1990 levels by 2050 or be 70% lower than expected that year. END_OF_DOCUMENT_TOKEN_TO_BE_REPLACED

HAVE YOUR VOICE HEARD: Government agency asking for public input for the upcoming hunting seasons…

The Washington Department of Fish and Wildlife (WDFW) is seeking public comments on proposed recommendations for 2020-2021 hunting seasons.

From Feb. 6 through Feb. 26, WDFW will accept written public comments to help finalize hunting rules and regulations proposed for the upcoming year. The proposals and comment forms will be posted on the department’s website at wdfw.wa.gov/hunting/regulations/season-setting.

Most of the proposals address minor changes in special permit levels and hunting area descriptions proposed since the Washington Fish and Wildlife Commission approved the state’s latest three-year hunting package. More substantial proposals, including several options related to cougar season setting, are also under consideration during this process.

END_OF_DOCUMENT_TOKEN_TO_BE_REPLACED

MORE WOLF DRAMA: Investigation singles out two range riders who filed hours for work in Stevens County when they were allegedly in Spokane…

The Spokesman-Review is reporting that a WDFW investigation alleges that two range riders were in Spokane when they were supposed to be in Ferry County as part of nonlethal deterrents against wolves. WDFW has turned in their investigation findings to a Thurston County prosecutor, Eli Francovich reports.

The range riders denied the allegations to the Spokesman-Review.

According to the investigation, range riders Arron and Jolene Scotten said they worked and were paid for days they did not work.