FROM THE EDITOR: Movies and TV shows that should be shot in the county

While everyone talks about the Stevens County economy like it’s some magical Rubik’s Cube that could be solved if we just sent Jay Inslee on vacation, I keep thinking “what if one cottage industry we could establish is a vibrant film community?” Other places have done it by making it easy to get permits and giving companies a nice tax break in turn for bringing in temporary jobs and a good shot of money to the area from the cast and crew.

Think about it; here are the films that COULD have been filmed in Stevens County. END_OF_DOCUMENT_TOKEN_TO_BE_REPLACED

FROM THE EDITOR: Thanks to all those logging dads in Chewelah

Father’s Day is just around the corner and while the more famous dads out there might be Sith Lords trying to chop off their son’s hand (looking at you, Darth Vader), there needs to be a bit of spotlight put on the logging dads out there.

You know the type: the greasy, shirtsleeve missing, diesel pickup truck that has more dents than chrome driving guys who work more than they sleep.

It’s no shock or surprise that Chewelah is a blue collar town — heck it’s in our school colors — and many guys are the wake-up-at-the-crack-of-dawn-and-lace- their-work-boots-up types. From the guys working in the mills, to the drivers in the log trucks, to the operators out in the brush – your efforts don’t fall on the deaf ears of your kids.

The logging industry is something of a contradiction; it’s both family-friendly in providing family-supporting jobs but also gives our logging dads a schedule that is busier than the Chataqua beer garden on a Saturday night. END_OF_DOCUMENT_TOKEN_TO_BE_REPLACED

(DON C. BRUNELL/Don C. Brunell is a business analyst, writer and columnist. He retired as president of the Association of Washington Business, the state’s oldest and largest business organization, and now lives in Vancouver. He can be contacted at theBrunells@msn.com.)

Last January, Boeing was poised for another record year. The company’s order book burst at the seams. Things seemed to be going Boeing’s way.

In 2019, Boeing planned to step up deliveries of KC46 aerial refueling jets to the U.S. Air Force, and the new 777 composite-wing jumbo jet was entering its critical test phases with plans to begin deliveries within the next two years. Boeing’s contracts for new aircraft climbed to 1,500 Dreamliners (787) and over 5,000 Max (737) jets.

The company is capable of handling increased production. Its mammoth manufacturing facilities in the Puget Sound Region are unlike any other in the world. The 64,000 workers assemble every Boeing jet used by airlines in those plants. Only Charleston, S.C., shares 787 production. END_OF_DOCUMENT_TOKEN_TO_BE_REPLACED

END_OF_DOCUMENT_TOKEN_TO_BE_REPLACED

FROM THE EDITOR: Friendly suggestions for our legislators

I’m not sure why the legislators of the Washington 7th District put up with me, but they do. Representative Joel Kretz even hopped on a spinning flower-printed lounge chair at Jean Bean’s Coffee in Chewelah during their annual legislator’s media tour two weeks ago.

Regardless of your political leanings, this kind of access to lawmakers is telling. I can meet my representatives in a casual coffee shop setting and talk politics with them freely. In other forms of government, we’d just have a photo of our leader on the wall and a stern reaction from a military person if we did something wrong.

It’s something we shouldn’t take for granted, nor should we take our role in government for granted. As people, we should always be communicating with our reps, giving them suggestions and telling them what we’re experiencing. The squeaky wheel gets the oil.

So without further delay, here are my friendly suggestions for our legislators to work on next year. END_OF_DOCUMENT_TOKEN_TO_BE_REPLACED

FROM THE EDITOR: Move to 2B has been resounding success

The final out of the Chewelah Cougar softball team bookended the school’s first season in the Class 2B Classification. As the girls finished up getting photos taken to the trophy, a sunburned, travel-weary self commented to new Statesman sports guy Taylor Newquist, who had to cover more games than I had to, “Boy, I think that’s enough softball until next year.”
And then it dawned on me, Chewelah had just finished its first year in the Class 2B ranks, a move that had caused a bit of hand-wringing. But I can tell that this move was successful on a multitude of levels.

Chewelah for years was one of the smallest teams in the Class A classification. This was a problem because the difference between a big or small school in Class A is wide, ranging from 214 to 461. This means the small schools might struggle to have a JV while other schools can field a varsity along with two developmental teams. As Geno Ludwig has said multiple times Chewelah was putting its freshman and sophomores up against school’s juniors and seniors and it was simply unfair. END_OF_DOCUMENT_TOKEN_TO_BE_REPLACED

LETTER TO THE EDITOR: Assembly or Militia

END_OF_DOCUMENT_TOKEN_TO_BE_REPLACED

Prom season is upon us. We all know what that means: More American adults are doing their proms all over again.

A New York Times headline about a growing number of adults says they are taking “A Second Shot to Have the Best Night of their Lives.”

And carry on like a bunch of retrograde adolescents.

The modern prom, reports Slate, “may be traced to the Ivy League and the annual tradition of a ‘presentation week,’ during which formal dress and dancing accompanied a promenade concert.”

Not content with only the well-to-do experiencing the awkwardness and misery of the prom, high schools across America embraced it, particularly after World War II. Now the prom is a rite of passage for American teens everywhere, with many blowing thousands of dollars on their big nights. END_OF_DOCUMENT_TOKEN_TO_BE_REPLACED

(DON BRUNELL/Don C. Brunell is a business analyst, writer and columnist. He retired as president of the Association of Washington Business, the state’s oldest and largest business organization, and now lives in Vancouver. He can be contacted at theBrunells@msn.com.)

With the dust settling from the 2019 legislative session, the focus is assessing the impacts on taxpayers and our economy.

Our state’s budget grew by a whopping 17.5 percent, which is one of the largest increases ever. Gov. Jay Inslee and his Democrat colleagues who controlled the legislature came to Olympia last January set on raising taxes despite higher than projected revenue collections.

“Rather than looking for cost savings, lawmakers chose to raise more than $1 billion in new taxes over the next two years and $2.5 billion over four years,” Association of Washington Business (AWB) President Kris Johnson said in a session-ending press release.
END_OF_DOCUMENT_TOKEN_TO_BE_REPLACED 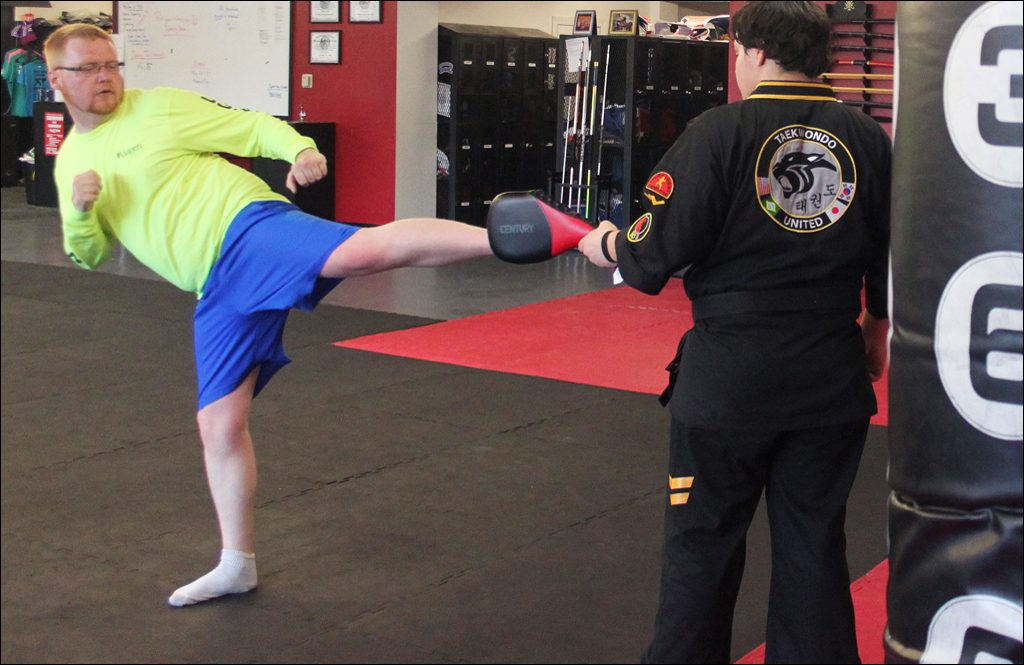 Many tendons and muscles were irreparably damaged in the making of this photo. (Jared Arnold photo)

Your body has a funny way of reminding you that you’ve made terrible life decisions.

With Bradley Taekwondo’s Spring Tournament happening this weekend, I decided I would give one of their classes a try and write about the experience. Surely, with my routine of occasionally hopping on an exercise bike, I would be able to handle it.

But the first signs of trouble popped up during the stretching period of class. After doing something called a pretzel stretch, I had the strangest and most alarming sensation in my hamstrings. It wasn’t so much they got pulled or strained beyond capacity. It was something along the lines of “WHOAH, you haven’t used me in a while and now you’re expecting me to do this?”
[Think of it like trying to coax a house cat to come to you when you call its name.] END_OF_DOCUMENT_TOKEN_TO_BE_REPLACED