Caring for the cabin 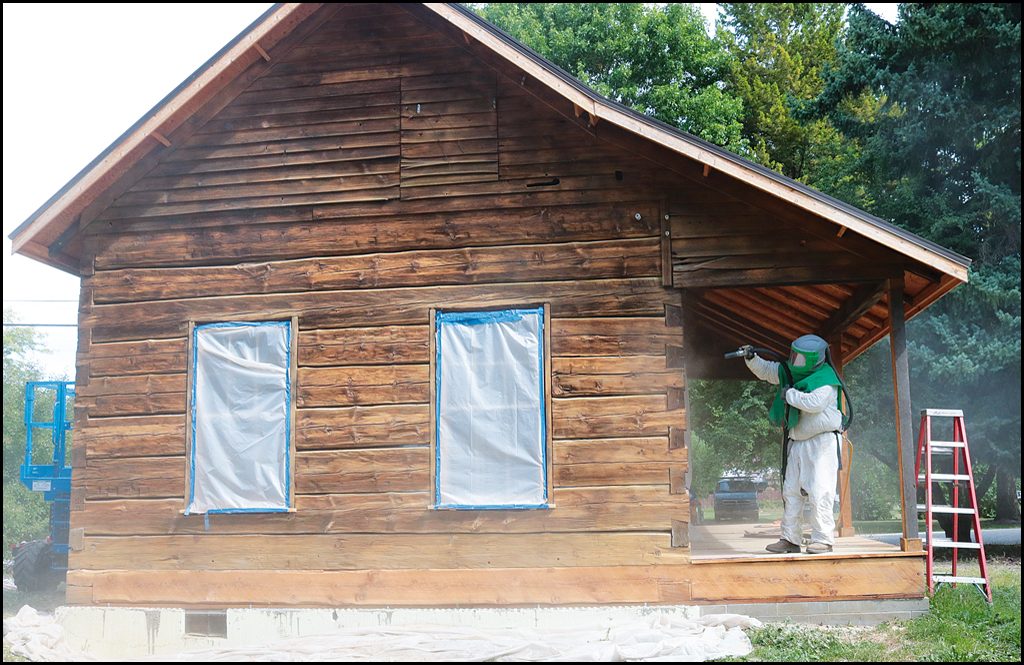 The Colville Indian Agency Cabin gets its new blasting, stain and clear coat thanks to efforts from the community. (K.S. Brooks photo)

The Colville Indian Agency Cabin has been in the middle of a flurry of activity by community members to help restore the historic structure to its former glory.

The cabin, which dates back to at least the 1870s, is the oldest structure in Chewelah and one of the oldest in the State of Washington.

The Stevens County Historical Society has been engaged in a long restoration process, begun by the late Don McLaughlin and Janet Thomas to preserve the building.
Since the project began, the modern trappings have been removed from the cabin as was a crumbling chimney. New sill logs were donated and installed because the old ones were rotting and a new porch was installed.

The Indian Agency Cabin for years served as the home for Indian Agents as well as the headquarters for Indian services for most of Eastern Washington. It was also in the private hands of the McPherson family for over 100 years, who then donated it to the Stevens County Historical Society.

Last week it received some much needed tender loving care to the outside timbers. After an extensive wrapping process for the windows and doors. Local company Chewelah painting and one of their contractors got down to business.

Patriot Mobile Media Blasting, blasted the old logs to remove failed finishes and unsound wood . This properly prepared the wood for two coats of stain and one coat applied by Chewelah Painting.
Chewelah Painting, owned by Mike Bellevue, also installed backrod and chinking on the cabin.

“Each year Chewelah Painting aims to complete a project which benefits the community as a whole,” Bellevue said. “It is nice to see this log structure again getting some attention and life with the army of volunteers working to restore this historical building and provide another improvement to the community, after the passing of Don McLaughlin. When it is all said and done, I feel this project meshes well with the efforts of many groups over the years.”

Since the passing of McLaughlin, Charlie Bourg has taken more of a leadership role in the restoration process. Bourg has an extensive background in restoring and preserving historic buildings.

This effort by the community has taken the cabin off the “most endangered” history building list by the state to “saved.”

The Stevens County Historical Society is also working on doing aerial drone footage of the cabin to further promote the project and what they are doing. For more info go to