BASEBALL: Fresh off their first district title since the early 90s, Colville ready for state 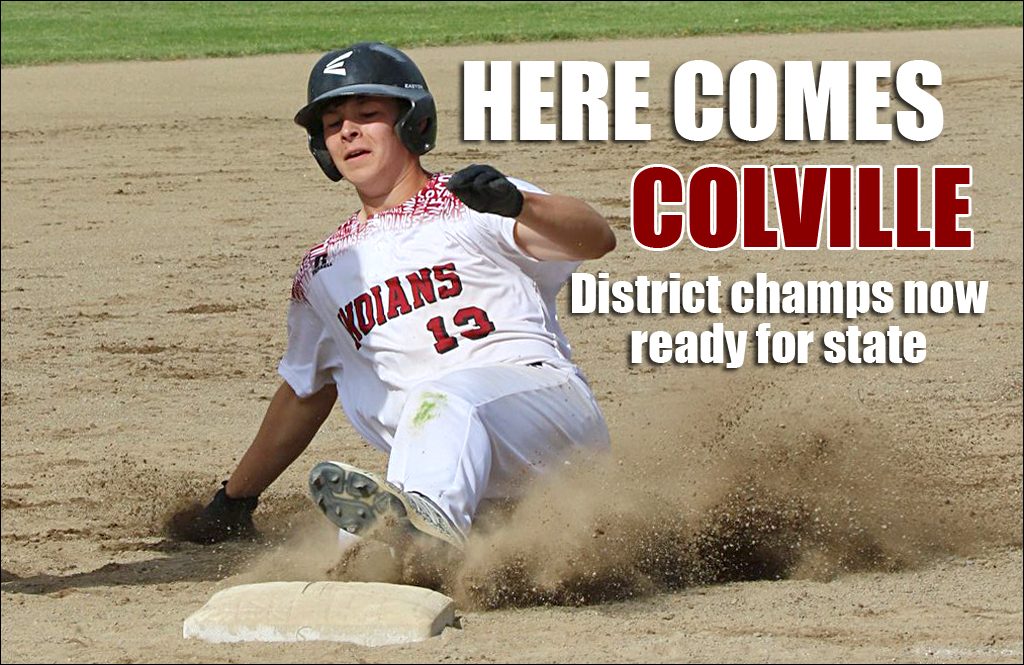 Colville heading to Moses Lake for state play on May 18…

Heading into last Tuesday’s district championship game, Colville was on the edge of doing something great. They hadn’t won a district title since Nirvana was highlighting the radio playcharts, and they knew exactly what they needed to do against league champ Freeman.

“We knew that we needed to stop [League MVP] Jace Phelan at the plate,” Colville coach Blake Sjordal said. “The previous game we played against them, he was responsible for five of the six runs when we lost in the bottom of the seventh. He did the same thing to Deer Park later on. We knew if we limited him at the plate, they would have a tough time scoring.”

The May 7 game at Avista Stadium featured a six-run rally by the Indians in the first inning. It was in stark contrast from their district semifinal game where they had a slow start against Riverside in the first stanza, then went on to score 17 runs and send the Rams packing. The Indians found themselves up 6-0 against the Scotties and never looked back.

“Leading into the game us coaches preached to just ‘Be you’ and play ‘your game.'” Sjordal said. “To many times, high school athletes fail to stay within themselves, and it causes players to lose focus.”

The Indians would go on to win 8-1, their first district title since 1993. John Knight struck out 13, kept Phelan out of the equation and pitched the complete game. This was the same John Knight who was a wrestling state champion and the QB of the Colville state title football team. He’s headed to Montana State to play football next fall.

“The experience from our state title run in football really helped,” Sjordal said. “Coach Cornwell preached that we were here to ‘win a football game.’ The result would be a state championship. I really tried to apply that to our teams mindset.”

The game-by-game approach helped, Colville has been fantastic at the plate and on the mound. So much so the defense could seemingly be picking daisies in the outfield if they wanted too. In the game against Freeman, short stop Jake Lindquist his two doubles, while outfielder Michael Fitzsimmons notched a triple in the cavernous Avista Stadium.

Colville’s up and coming season features a long winning streak to begin the season and their best record in years. While the last two seasons they hovered around .500, this year they’ve had a bevy of shutouts from their pitchers and a ton of double-digit run games from their bats. This carried over to the district title game.

“From an offensive standpoint, our strategy was to put the game in motion by being us,” Sjordal said. “Using our speed to force pressure on the bases, and use the bunt game given the situation. In the first inning we had runners where we wanted them to play the small ball, and clutch hits to bring runners in.”

Anyone who has watched this Colville team play, knows when they’re batting it can be chaotic. Putting pressure on the other team might be an understatement as their at-bats seem more like whirlwinds.

“In any big game emotions and energy play a factor,” Sjordal said. “It was a big deal for us to strike first. Putting up a six-spot in the first inning really set the tone for the game, forcing Freeman into pressured situations at the plate, allowing us to just be us and play our game.”

When the game was over, the Indians had done something that hadn’t been accomplished since the original Jurassic Park was in theaters. Now we’re on the fourth of fifth sequel in the series. It punched Colville’s ticket to state and in a favorable matchup against another league’s No. 4 team – dependent on the crossover round.

“Winning the district championship was awesome,” Sjordal said. “It was a great accomplishment for our program. What I love about this group of players is they understand it’s just a stepping stone for the next goal. They enjoyed the moment, and got right back to the grind the next day for the phase of the season.”

The next phase is May 18 at 1 p.m. when they’ll play at Moses Lake’s Larson Field against someone. If they win three more games they will be state champion.

Championships have come in droves for the Colville Indians this year, but its been a particularly impressive and exciting time for the baseball team.

“The community has been so supportive of this team,” Sjordal said. “So many people have played a huge role in making the kids who they are today. I feel very fortunate to coach them. I have had a lot of people congratulate us on a great season and honors all of us have received from the league. It just makes you realize how many people actually follow/watch the games, read the paper, look for the box scores and want our team to be successful. It’s been a great experience and we can’t wait to compete in the state tournament.”

Colville expects to play College Place or Naches Valley, who both have a rich tradition of state tournament runs and success. The past two years Colville has advanced to regional crossover play but ran into powers Cashmere and Okanogan.

By virtue of winning the district title they get to skip the crossover step.

“We are looking forward to the challenge and can’t wait to compete,” Sjordal said. “Being in this situation where we have a week and a half off is different. We are going to use it to our advantage by working out some of our flaws, while refining some game strategy and fine tuning our pitching staff.”